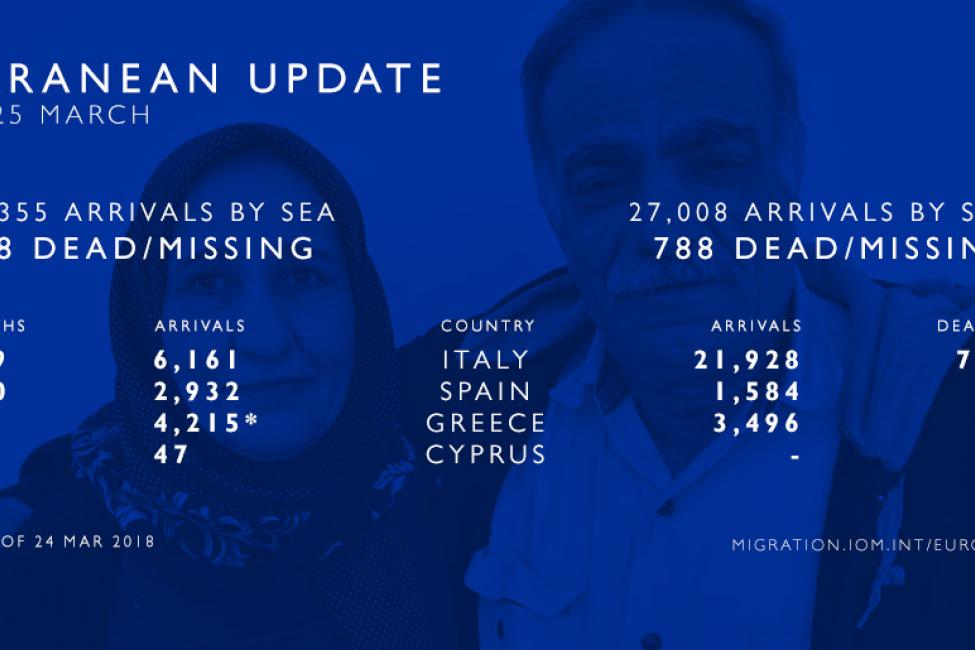 Geneva – IOM, the UN Migration Agency, reports that 13,355 migrants and refugees have entered Europe by sea through the first 84 days of 2018, with about 46 per cent arriving in Italy and the remainder divided between Greece (32%) Spain (22%) and Cyprus (less than 1%).

IOM Athens’ Kelly Namia reported Monday that over the four days (21-24 March) the Hellenic Coast Guard informed IOM of at least two incidents requiring search and rescue operations off the island of Lesvos.

The Coast Guard rescued 128 migrants and transferred them to that island. Another 77 migrants reportedly landed on Lesvos, plus 32 on Leros, bringing total arrivals through 24 March to 4,215. In 2017, the total on the same date was 3,496 – making arrivals for the first three months of 2018 about 20 per cent heavier than was seen on this route than last year (see chart below).

IOM Spain’s Ana Dodevska reported Monday that total arrivals by sea in 2018 have reached 2,932 men, women and children who have been rescued in Western Mediterranean waters through 24 March. That compares with 2,426 through all of March 2017.

The 498 deaths on the three Mediterranean Sea so far this year compare with 788 at this time in 2017, a decline of about 37 per cent year-on-year.

Worldwide, IOM’s Missing Migrants Project has recorded 789 deaths and disappearances during migration in 2018, or virtually the same total reported last year just for the Mediterranean (see chart below).

Most recently, the body of an unidentified African migrant was found washed up to the shore of Tripoli, Libya on Tuesday, 20 March.

Other additions to the Missing Migrants Project database since last Friday’s update include three migrants in Southeast Asia. The three, from Myanmar, were killed while another eight were injured in a crash on 17 March in Tambon Ban Paeng, Thailand after their van hit a truck and caught fire.

On the US-Mexico border, where 55 migrant deaths have been recorded this year, a 35-year-old Honduran migrant was found dead Thursday after he drowned while attempting to cross the Rio Grande/Rio Bravo at Reynosa, Mexico.

The bodies of two migrants were found in Texas on March 15th – one on a ranch near Falfurrias, the other near Sarita, Texas.