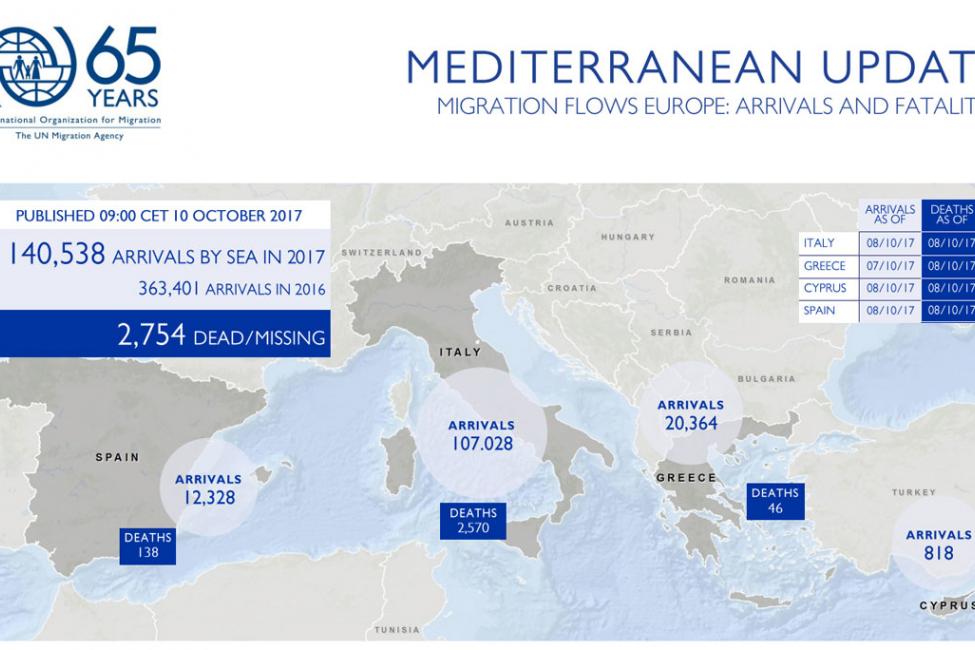 Geneva – IOM, the UN Migration Agency, reports that 140,538 migrants and refugees entered Europe by sea in 2017 through 8 October, with over 75 per cent arriving in Italy and the remainder divided between Greece, Cyprus and Spain. This compares with 318,207 arrivals across the region through the same period last year.

IOM Rome’s Flavio Di Giacomo reported that Sunday a Tunisian military ship collided with a vessel carrying around 70 migrants in the Maltese search and rescue area, 54 km from the island of Kerkennah (governorate of Sfax). According to Italian media, the migrants – all, apparently, Tunisian – left Tunisia from Kerkennah. The collision caused the craft to sink. Maltese authorities coordinated rescue operations carried out by the Italian Coast Guard and Italian Navy, who confirmed 46 survivors with remains of eight persons recovered. By Monday evening the estimate of those missing remained 20.

Di Giacomo provided the following statistics on Tunisian migration by sea to Italy, which appears to be increasing over previous years. He reported 1,637 Tunisians arrived by sea in Italy in 2014, then 880 the following year and 1,200 last year. During the first eight months of 2017, Di Giacomo reported, 1,357 migrants from Tunisia arrived in Italy, or more than all of 2016. In September, at least another 1,400 arrived.

“It’s a new trend, but I wouldn’t call it a consequence of the recent ‘closing’ of the Libyan route, because the nationalities are different,” Di Giacomo explained.

“In addition to the estimated 1,400 Tunisian migrants registered in September, we should also consider that there have been many cases where migrants arrived in Sicily and succeeded in disappearing before being intercepted by the police. So, the number is higher, but we cannot say how many,” he added.

IOM Libya’s Christine Petré reported that IOM has continued its emergency response in Sabratah, where in the aftermath of weeks of conflict in the Libyan coastal city of Sabratah, at least 4,000 migrants – many previously held in numerous informal detention centres and camps – have been transferred to a hangar in the city’s Dahman area, where IOM is providing emergency assistance.

Sabratah, approximately 80 kilometres west of Tripoli, is one of the main departure points for migrant boats attempting to make the perilous journey across the Mediterranean Sea to Europe.

On 7 October, a day after the first transfer of migrants, IOM sent a field team to the hangar to assess the situation. By the end of the day, the team reported that 2,600 migrants (1,819 men, 704 women and 77 children) were being kept at the site by the Libyan Directorate for Combatting Illegal Migration (DCIM). More migrants from other locations in Sabratah were later transferred to the hangar and more are anticipated to arrive soon.

IOM this week is providing assistance at the assembly point, including psychosocial support. At the same time three critical medical cases received ambulance transfer to a medical clinic and additional migrants were treated for minor injuries.

IOM fears that the number of migrants affected by recent developments in Sabratah will continue to rise. Throughout the day migrants have arrived both in Zuwara and Sabratah, some of whom have walked for hours. This week IOM has received reports of some 2,000 migrants travelling by foot from Sabratah to Zuwara and are now also in dire need of humanitarian assistance.

Some of the current identified needs include milk and diapers for babies, and water and food. IOM’s emergency food intervention in Sabratah continues.

IOM Spain’s Ana Dodevska reported that arrivals to Spain for the month of September totalled 1,004, about half the level for August. The total arrivals for 2017 have now reached 12,328 through 9 October. At this time last year, Spain saw a total of 5,445 migrants arriving by sea.

IOM Athens’ Kelly Namia on Monday reported four incidents off the islands of Lesvos and Chios that required search and rescue operations. The Hellenic Coast Guard brought 153 migrants and transferred them to the respective islands.

Namia further reported that migrant sea arrivals to Greek territory totalled 822 for the first seven days of October, and 20,364 for the year so far. (See chart below.)

Worldwide, IOM’s Missing Migrants Project (MMP) has recorded 4,590 migrant fatalities in 2017. In the Central Mediterranean, at least 8 people drowned and an estimated 20 migrants are missing* after a boat carrying dozens collided with a navy vessel off Tunisia’s southeast coast on 8 October. These deaths bring the total of fatalities in the Mediterranean in 2017 to 2,754.

Since the last update, MMP recorded another incident in Southeast Asia: 13 migrants died, including 11 children, and at least 18 are still missing* after a boat carrying Rohingya migrants capsized in the Naf River, also on 8 October. Nearly six weeks into a mass exodus of people fleeing violence in Myanmar’s Rakhine State, dozens have died while fleeing to Bangladesh: IOM’s Missing Migrants Project has recorded 172 fatalities on the Bangladesh-Myanmar border since 31 August 2017.

Additionally, MMP recorded the deaths of four migrants on the US-Mexico border: one migrant died in Kenedy County, Texas on 6 September; another was found dead in Starr County, Texas on 1 October; one young man was hit by a vehicle in the Interstate 8 near Jacumba, California, on August 25; and the body of one migrant was found inside a tractor trailer at the US Border Patrol Falfurrias Checkpoint on 6 October.

In Mexico, the remains of another migrant were found near train tracks in Saltillo, Coahuila, on 8 October.

*When deaths occur at sea, Missing Migrants Project often relies on the estimates of survivors once they are rescued, with the lowest estimate of missing persons always used in the dataset.