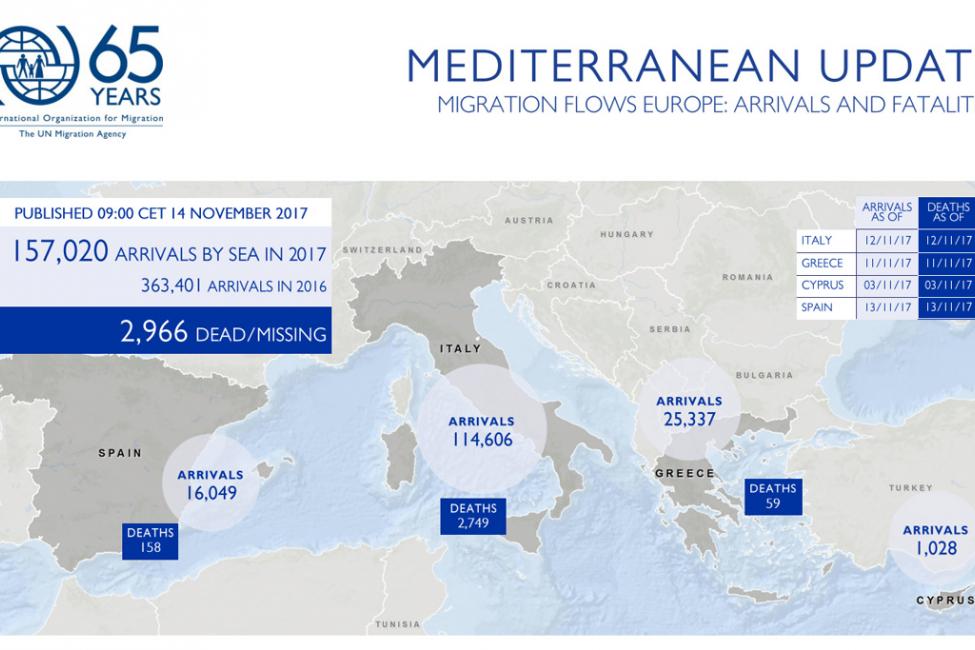 Geneva – IOM, the UN Migration Agency, reports that 157,020 migrants and refugees entered Europe by sea in 2017 through 12 November, with about 75 per cent arriving in Italy and the remainder divided between Greece, Cyprus and Spain. This compares with 341,215 arrivals across the region through the same period last year. IOM Spain’s Ana Dodevska reported Monday (13/11) total sea arrivals had topped 16,000, including 418 registered during the past weekend:  276 on Saturday and 142 on Sunday. She said the main ports of arrivals were Almeria, Tarifa, Malaga, Motril, Barbate and Algeciras.

IOM Athens’ Kelly Namia reported Monday (13/11) of at least three incidents this weekend off the island of Lesvos that required search and rescue operations. The Hellenic Coast Guard rescued 148 migrants and transferred them to safety.

Almost 14,000 (13,932) men, women and children have entered Greece by sea from the waters of the Eastern Mediterranean since 1 August, or more migrants than entered during all of 2017’s first seven months. Namia further reported that more than 1,500 migrants or refugees entered Greece by sea through November’s first 11 days, bringing migrant sea arrivals to Greek territory to 25,337 for the year so far (See chart below).

IOM Libya’s Christine Petré reported Monday (13 November) the remains of two bodies were discovered by locals onshore at Al Maya, west of Tripoli, on 12 November. These latest fatalities are not part of the 2,966-figure cited above.
IOM’s Missing Migrants Project reported the remains of three children were recovered over the last few days in the same area near Mantamados, on the north-eastern coast of Lesvos, Greece. In the Western Mediterranean, the remains of two young men were recovered from a beach on 9 November near Tangiers, Morocco. These deaths bring the total of fatalities in the Mediterranean in 2017 to 2,966, a figure that compares with 4,329 at this same point last year.

IOM Cyprus’ Dimitrios Tsagalas reported new details of a boat arrival on 3 November with 176 migrants on board. The boat was spotted off Pyrgos in the Tylliria area in Paphos and was towed to Latchi harbour.

Initial media reports talked about 100 migrants; however, as IOM Cyprus confirmed with authorities, there were 176 people aboard: 175 Syrians and one Ethiopian. More specifically, there were 63 females (34 adults and 29 minors) and 113 men (83 adults and 30 minors), who travelled from Turkey to Cyprus. All migrants were transferred to Purnara Reception Centre.

With this incident, the total number of migrants who have arrived irregularly by boat in Cyprus is 1,028 people, or roughly three times 2016’s total of 345 migrants (through nine months).

Worldwide, IOM’s Missing Migrants Project (MMP) has recorded the deaths of 5,014 people migrating in 2017 – or a daily average of 16 men, women and children per day this year.

In addition to five new deaths reported in the Mediterranean, MMP recorded the deaths of two young men on the US/Mexico border: on 5 November, one man drowned while attempting to cross the Río Bravo near Nuevo Laredo in Mexico. Another drowning in the Río Bravo was recorded near Reynosa on 9 November. In Central America, two South Asian migrants died in a vehicle accident near Malpaisillo in Nicaragua, near the border with Honduras.  Both were from India.