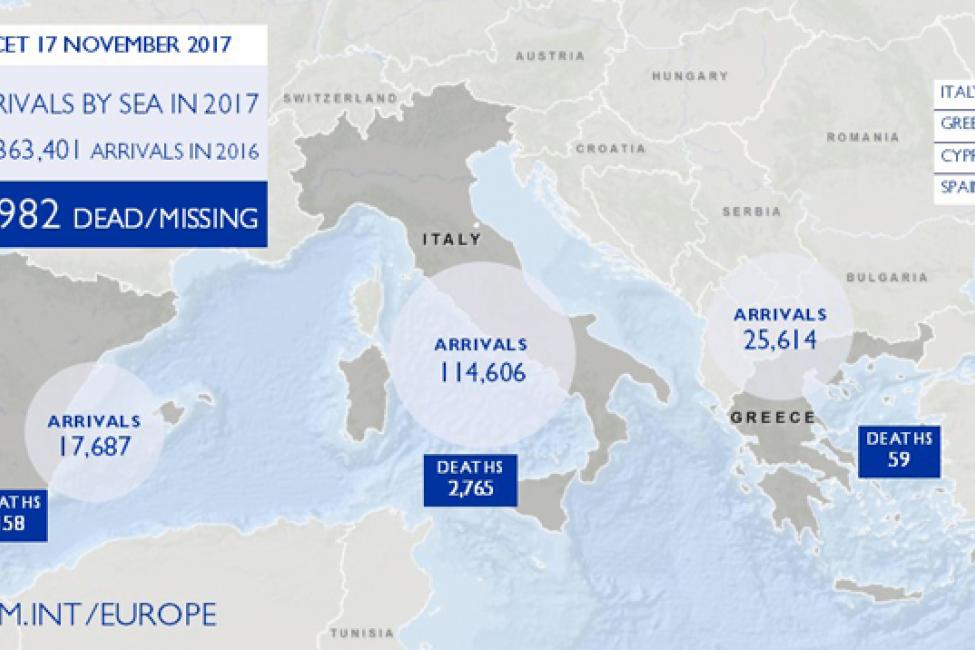 Geneva – IOM, the UN Migration Agency, reports that 158,935 migrants and refugees entered Europe by sea in 2017 through 15 November, with about 75 per cent arriving in Italy and the remainder divided between Greece, Cyprus and Spain. This compares with 343,158 arrivals across the region through the same period last year.

IOM Rome reported Thursday (16/11) with new information concerning twin shipwrecks off the Libyan coast on 3 November, when IOM spokesman Flavio Di Giacomo’s reports yielded a total of 90 victims, including several dozen African women – most known to be Nigerian – whose deaths initially were being investigated as homicide.
“It is unusual for so many bodies to be recovered and for all of them to be women and girls. In total, the bodies of 26 girls were recovered,” said IOM’s Federico Soda in Rome.  “At first, what struck our attention was the news of the bodies of 26 girls brought to land by rescuers, including 23 young Nigerians.”
Soda added: “At first the cause of their death was not clear, but the autopsy has since confirmed that they drowned and that no signs of recent physical or sexual violence were found on their bodies. It is important that we have additional information and estimates about how many people are missing and presumed drowned. These are human beings whose life and death cannot go unnoticed and who most probably spent their last moments in terror, fighting for their lives.”
Survivors' stories revealed other details. Initially it had been estimated that one of the incidents resulted in the confirmed deaths of 23 people with another 53 considered missing. Di Giacomo explained it has since emerged that the second incident caused, besides the death of three women whose remains were recovered, the drowning of another 11 victims, whose bodies remain missing at sea.
“That’s 64 people now gone missing and 26 bodies recovered,” Di Giacomo concluded. “This is the tragic outcome.” He said a funeral service for the 26 girls will take place Friday in Salerno. With this update, IOM reports these deaths bring the total of fatalities in the Mediterranean in 2017 to 2,982. IOM Spain’s Ana Dodevska reported Thursday total sea arrivals reached 17,687 through 14 November, nearly 10,600 more than had arrived through this date in 2016, when a total of 7,080 men, women and children reached Spanish shores. Spain’s Ministry of the Interior counted 975 individual migrant vessels making these voyages in 2017, compared to just 377 in 2016, an increase of nearly 600 boats. That increase was much greater than irregular migration arrivals to Spanish enclaves in North Africa.  Those land arrivals thus far in 2017 are 5,473, or about 15 per cent of 2016’s totals in mid-November, when a total of 4,758 migrants had arrived.
IOM Spain noted the 17,687 total includes arrivals to Spain’s Canarias islands in the Atlantic, once a very busy destination for sea-borne migrants leaving Northern Africa. While irregular migration continues to Las Canarias, this year Spanish authorities have reported just 291 such arrivals, which is a sharp decline from 2016 when 566 arrived on this route.
IOM Athens’ Kelly Namia reported Thursday (16 November) of two incidents off the island of Lesvos since Tuesday requiring search and rescue operations. The Hellenic Coast Guard rescued 58 migrants and transferred them to safety. IOM reported the arrival of only two migrants on 12 November (both to the island of Kos), none on 13 November, and then 209, to Lesvos and Samos, on 14 November.
A total of 14,209 men, women and children have entered Greece by sea from the waters of the Eastern Mediterranean since 1 August, or more migrants than entered during all of 2017’s first seven months. Namia further reported that more than 1,700 migrants or refugees entered Greece by sea through November’s first two weeks, bringing migrant sea arrivals to Greek territory to 25,614 for the year so far (See chart below).

Worldwide, IOM’s Missing Migrants Project (MMP) has recorded the deaths of 5,052 people migrating in 2017. That compares to a worldwide figure of 6,977 at this time last year – a decline of over 1,900 fatalities. Deaths on the Mediterranean continue to comprise a majority of all migrant deaths, as has been the case for the past three years.
This year’s total of 2,982 fatalities in the Mediterranean compares to 4,572 at this time in 2016, a drop of about 1,600 men, women and children. In other words, almost the entire decline in worldwide fatalities can be attributed to fewer deaths on the Mediterranean. Meanwhile, most data from the rest of the world continue to track historic trends (See chart below). Beyond the Mediterranean, MMP continues to monitor lethal migrant routes, where reports of death by drowning, highway and railroad accidents and the occasional homicide surface daily.

In Central America, the deaths of six migrants were recorded in different incidents over the past few days. On 14 November, a child and his father, both from Honduras, were shot when they were travelling on a rural road near Huimanguillo in Tabasco, Mexico. One day before (13/11), the remains of two Honduran migrants who had allegedly been murdered were found in a vacant lot in Palenque, Chiapas. On that same day, a Salvadoran migrant died after falling from a freight train in Mazatlán, Sinaloa.
On 14 November, remains were recovered of a migrant killed in a vehicle accident on a motorway near Cuauhtémoc Stadium in Puebla, Mexico. In Díaz Ordaz, Tamaulipas, on 11 November, one migrant drowned in the Río Bravo while attempting to cross to the US.
In South Asia, the remains of 15 Pakistani migrants were found on Wednesday (15/11) in a mountainous region of Buleda, in Balochistan province, Pakistan. Initial reports indicate that they were shot when they were planning to cross the border into Iran.
Missing Migrants Project data are compiled by IOM staff but come from a variety of sources, some of which are unofficial. To learn more about how data on missing migrants are collected, click here.
Latest Mediterranean Update infographic: http://migration.iom.int/docs/MMP/171117_Mediterranean_Update.pdf