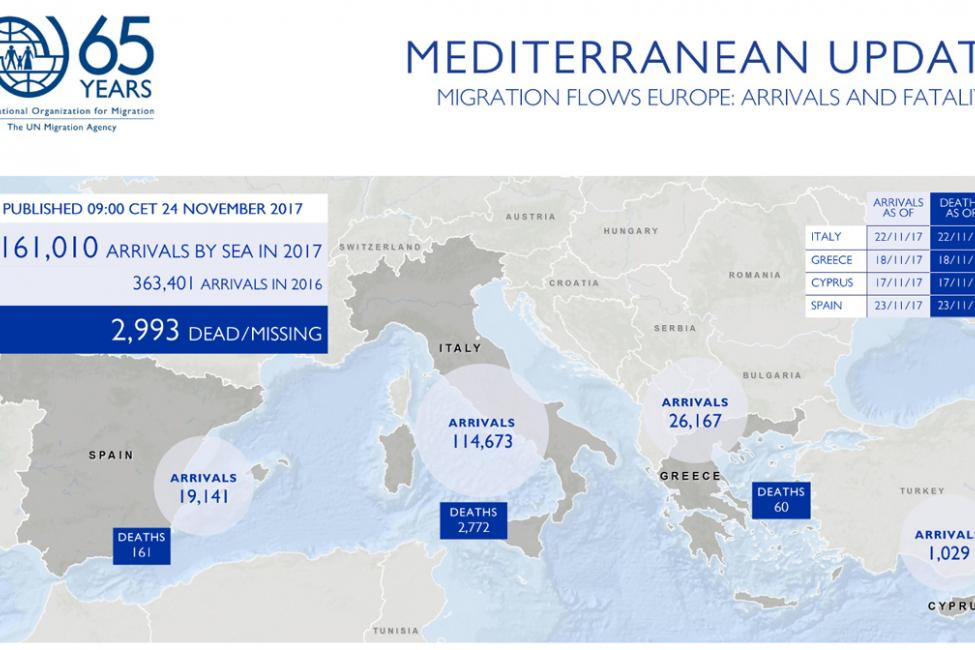 Geneva – IOM, the UN Migration Agency, reports that 161,010 migrants and refugees entered Europe by sea in 2017 through 24 November, with about 75 per cent arriving in Italy and the remainder divided between Greece, Cyprus and Spain. This compares with 345,831 arrivals across the region through the same period last year. IOM Rome reported 23 November that 114,673 migrants arrived by sea to Italy this year, according to Ministry of Interior figures, which is a nearly 32 per cent reduction from arrivals at this same point in 2016 (see chart below).  Not included in this total were 1,127 migrants rescued on 22 November as part of 11 rescue operations.  The rescues were carried out by the Italian Coast Guard, the Italian Navy, the Irish Navy ship Le Niamh and the Spanish Navy ship Cantabria, and by the NGOs Aquarius, Seefuchs, Lifeline and Seawatch. According to the Italian Ministry of Interior, the primary countries of origin of migrants arriving by sea to Italy were Nigeria, Guinea, Bangladesh, Cote d’Ivoire and Mali.

Worldwide, IOM’s Missing Migrants Project (MMP) has recorded the deaths of 5,080 people migrating in 2017.  Two deaths were recorded in Europe over the past days. On 22 November, the remains of a migrant were found in a mountain village in Evros region, Greece. On 21 November, a 6-year-old Afghan girl was hit by a train on the Serbia-Croatia border. In the Middle East, three migrants lost their lives on the Syria-Turkey border. On the US/Mexico border, the remains of one migrant were recovered in the All-American Canal in Calexico, California, on 19 November.

IOM’s Missing Migrants Project documented that six people drowned this week after falling from a boat overnight off the coast of Libya. Another 107 people were rescued from the same boat by the Spanish NGO Proactiva Open Arms.

In the Central Mediterranean, the remains of one woman were found in a rubber boat off the coast of Libya by the rescue ship Aquarius, run by SOS Méditerranée and Médecins Sans Frontières. According to testimonies of survivors, she died right before they left Libya due to lack of medical care. These deaths bring the total of fatalities in the Mediterranean in 2017 to 2,993.