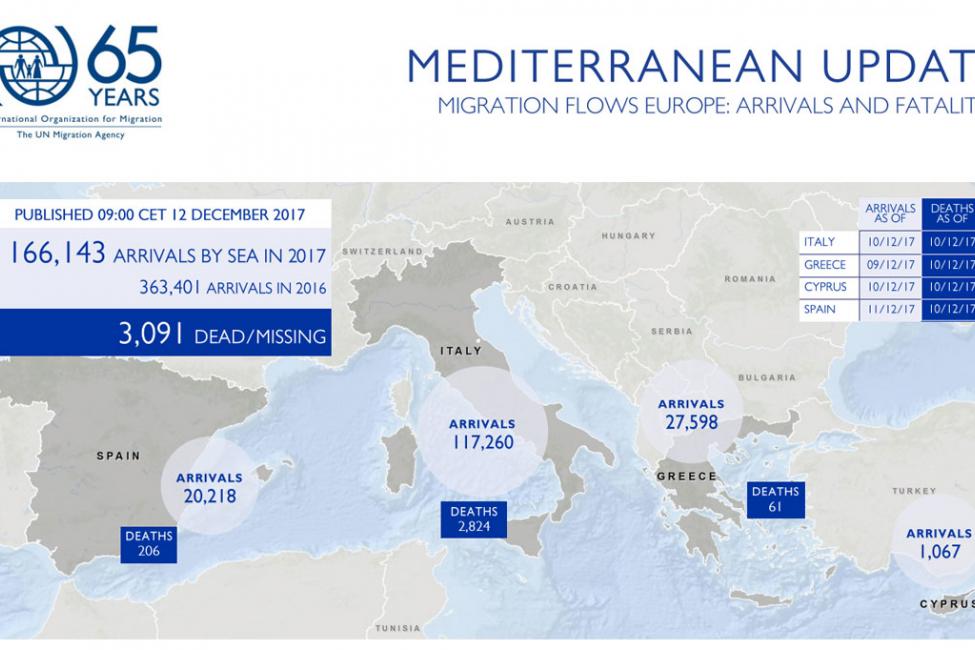 Geneva – IOM, the UN Migration Agency, reports that 166,143 migrants and refugees entered Europe by sea in 2017 through 10 December, with just over 70 per cent arriving in Italy and the remainder divided between Greece, Cyprus and Spain. This compares with 354,395 arrivals across the region through the same period last year.

IOM Rome reported Monday (11 December) that, according to Ministry of Interior figures, 117,260 with three weeks remaining in the calendar year. That number is precisely two-thirds the number of sea arrivals to Italy through this same date last year – or a 33 per cent fall-off in total sea arrivals in the Central Mediterranean route from this point last year. IOM Rome’s Flavio Di Giacomo on Monday reported that over the weekend 516 migrants had been rescued in the Mediterranean. These migrants were being brought to Italy on Monday and the overall majority of them are not included in the table above.

Di Giacomo also reported statistics from Italy’s Ministry of Interior as to the top nationalities arriving in Italy this year irregularly this year from North Africa. Through the end of November, Nigeria remains the largest sender with 18,049 – a number that is less than half the 36,352 arriving through 11 months of 2016.

Sub-Saharan senders Guinea and Côte d’Ivoire – respectively the #2 and #3 sender states – also recorded steep drops in arrival numbers over the same period last year. Bangladesh, at #4, has recorded a slight rise – to just under 9,000 migrants – although practically that entire total crossed from Africa before summer. Mali (#5), Eritrea (#6) and Sudan (#7) also showed drops, as did Senegal (#9) and The Gambia (#10). Two North Africa senders, Tunisia (#8) and Morocco (#11), recorded increases (see chart below). IOM Spain’s Ana Dodevska said Monday that 20,000 irregular sea arrivals are the most reported by Spain since 2006, when over 39,000 migrants entered Europe irregularly through Spanish waters. That year, however, some 31,678 were arrivals to Spain’s Canarias islands off West Africa. In 2006 just 7,502 entered Spain through the Western Mediterranean.

Some 16,193 men, women and children have entered Greece by sea from waters of the Eastern Mediterranean since 1 August, or almost 50 per cent more migrants than entered (11,405) during all of 2017’s first seven months. Namia further reported that 636 migrants or refugees entered Greece by sea during the dates 1-9 December, but almost half of those – 264 arriving on the islands of Chios, Samos and Lesvos – came on a single day, which was last Wednesday (6 December). Through 9 December, the total number of sea arrivals to Greek territory is 27,598 (see chart below).

IOM’s Missing Migrants Project (MMP) reported worldwide deaths of 5,205 men women and children during migration in 2017. Since last week’s update, the Missing Migrants Project team recorded the death of one migrant on the US/Mexico border: a Mexican national died of hypothermia in Maverick County, Texas (USA) on 7 December. Agents from the US Border Patrol received a distress call from a party of migrants lost on a remote ranch after crossing the border. When agents finally located the group, one had succumbed.