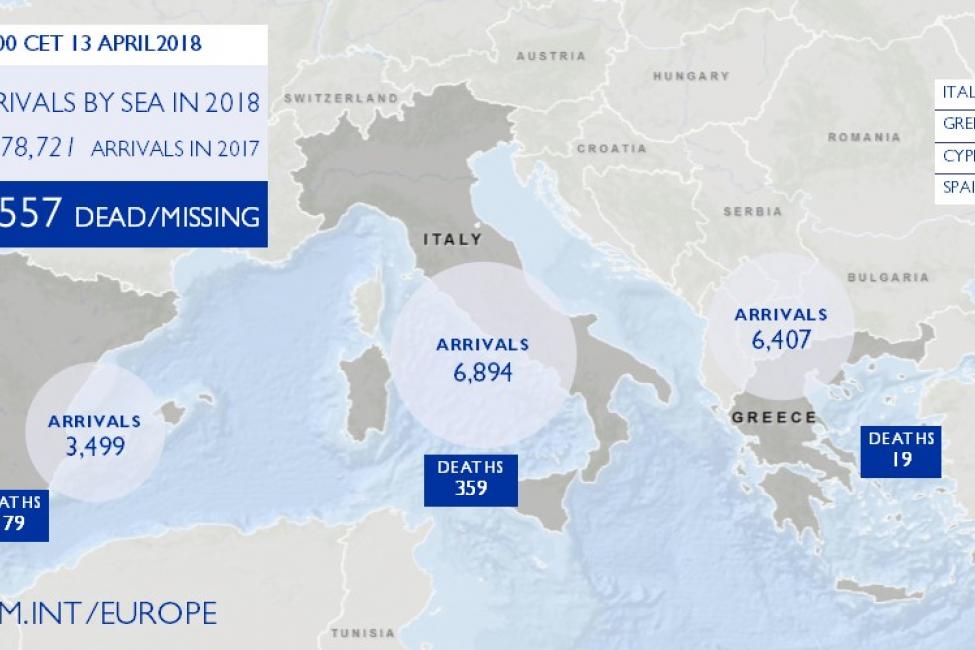 Geneva – IOM, the UN Migration Agency reports that 16,847 migrants and refugees entered Europe by sea in 2018 through 11 April, with the vast majority arriving in Italy and the rest in Spain, Greece, and Cyprus. This compares with 33,602 arrivals across the region through the same period last year. IOM Athens’ Kelly Namia on Thursday (12/04) said that the total number of sea arrivals to Greek territory in 2018 through 11 April was 6,407 with the main landing points being the islands of Lesvos, Kos, Samos, Rhodes, Kalymnos, Megisti, Leros and Chios.

IOM Spain’s Ana Dodevska reported Thursday (12/04) that total arrivals by sea to Spain in 2018 have reached 3,499 men, women and children who have been rescued in Western Mediterranean waters through 11 April. This compares with 3,326 arriving last year through all of April.

Dodevska also reported that no land arrivals have been recorded so far in April, which compares with 417 land arrivals registered through March this year. Worldwide, IOM’s Missing Migrants Project (MMP) has recorded 933 deaths and disappearances during migration in 2018. In the Mediterranean alone, 557 migrants are estimated to have died this year. Most recently, 36 migrants died in the Western Mediterranean.

On Monday, 9 April, a boat capsized off the coast of Tangiers, Morocco. The bodies of six migrants, including four Moroccan nationals, and 10 injured survivors were found by Moroccan authorities. According to survivors’ testimonies collected by Spanish NGO Caminando Fronteras, there were 46 people on the boat when it capsized, therefore 30 remain missing.

In Europe, two migrants drowned when crossing the Kolpa river, which marks Slovenia's southern border with Croatia: on 9 April, the body of a 19-year-old Moroccan man was found in the municipality of Črnomelj, Slovenia, while the following day, authorities retrieved the body of an Algerian national who drowned when crossing the river through the same area. This year, four deaths have been recorded on this border.

There were three other additions to the Missing Migrants Project database since last Friday’s update. In Southeast Asia, MMP recorded the deaths of ten Rohingya in the Andaman Sea. Survivors had been stranded for weeks in their boat and were rescued by Indonesian fishermen on 6 April and brought to Aceh.

The five survivors, interviewed by IOM field staff, confirmed that the journey started with 15 people on board: three of them died of starvation and seven tried to swim to shore and are presumed dead. On 9 April, seven migrant workers from Myanmar died in a vehicle accident on Highway 12, outside Mae Sot, Thailand. On the Pakistan-Iran border, two young Pakistani men died when attempting to cross into Iran on 9 April.