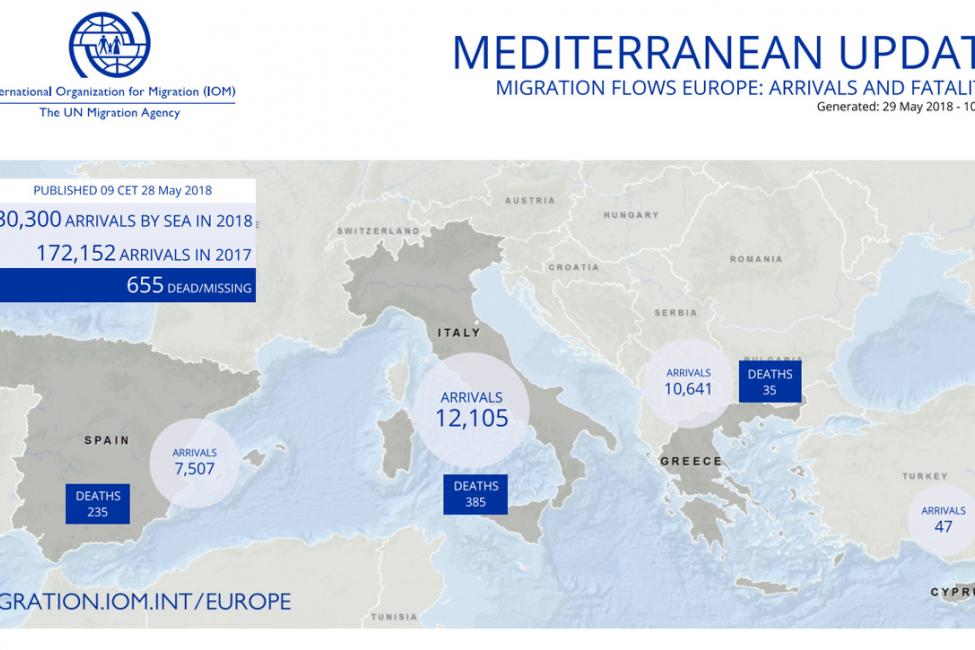 Geneva – IOM, the UN Migration Agency, reports that 30,300 migrants and refugees entered Europe by sea through the first 147 days of 2018, with about 40 per cent arriving in Italy, 35 per cent in Greece, with the remainder (25%) arriving in Spain.

Also worth noting: in the month of May, arrivals to Italy rank second – trailing Spain and slightly ahead of Greece (see chart below).

IOM Rome’s Flavio Di Giacomo noted that the 12,105 migrants who are registered as having arrived by sea to Italy this year is an amount 80 per cent less than that reported last year in the same period, when 58,953 irregular migrants and refugees arrived in Italy and a 70 per cent decline from the 40,671 arriving to this point in 2016.

Over 2,200 migrants have been rescued since last Friday in the waters between Northern Africa and Italy. The rescue operations have been carried out by Italian and European ships, including NGOs. The table above do not include about 1,000 migrants landed today in Palermo and in Messina. Some migrants (about 400) arrived from Tunisia, while the overall majority (over 1,800) from Libya.

“These two routes have always been completely different: while from Tunisia we usually register the arrival of Tunisian migrants, from Libya we register the arrival of migrants coming mainly from Sub-Saharan African countries, and who are leaving their country for a series of different reasons,” said Federico Soda, Director of the IOM Coordination Office for the Mediterranean.

“However, we have noticed that lately in some cases there have been some Western African migrants coming from Tunisia. For instance, among the 296 migrants departed from Kerkennah (Tunisia), rescued at sea and brought to land on Friday 25th of May, there were about 220 Tunisians and 70 migrants coming from Western African countries, especially from Côte d’Ivoire. We will further investigate this new phenomenon since it appears that some smugglers are organizing journeys from Niger to Tunisia, transiting through Algeria and avoiding Libya,” Soda added.

The biggest landing operation took place on Saturday, 26 May in Augusta (Sicily), where the Italian Coast Guard ship Dattilo brought to land over 720 migrants. Among them, the remains of a man who died during the sea crossing: according to testimonies he was already very weak and sick before the departure, and he didn’t survive the journey.

“All migrants arrived in Augusta have departed from Libya. There were many Western Africans together with migrants coming from the Horn of Africa,” said Di Giacomo.

“IOM staff at the landing point gathered many dramatic stories of migrants falling victim to abuse and violence. In one case, we met a Guinean migrant who has been detained by an armed Libyan group in an unofficial centre close to Bani Walid,” Di Giacomo continued. “He was tortured every day, and photos of his wounds were sent to his family in order to get a ransom of 8,000 Dinars. They broke his foot, they burned his elbow with an iron, and they cut off his finger with a drill. After eight months he was eventually abandoned, almost dead, in a street because his family couldn’t pay the amount of money requested.”

“These stories are, unfortunately, quite common: many migrants, even those who started their journey as economic migrants, end up becoming victims of human rights violation along the route,” insisted Di Giacomo.

Arrivals to Italy through the first four weeks of May are about one-tenth of last year’s May volume, and one-ninth of that of May 2016 (see chart below).

“These stories are, unfortunately, quite common: many migrants, even those who started their journey as economic migrants, end up becoming victims of human rights violation along the route,” insisted Di Giacomo.

Arrivals to Italy through the first four weeks of May are about one-tenth of last year’s May volume, and one-ninth of that of May 2016 (see chart below). In Spanish waters so far this year, IOM Madrid’s Ana Dodevska reported Monday that a total of 2,880 migrants have been rescued on the Western Mediterranean route through 27 days in May – compared with 835 for the entire month of May last year. That brings to 7,507 the total number of men, women and children who have been rescued trying to enter Spain by sea this year (see charts below). Spanish arrivals in 2018 are consistent with those of 2017, but far outpacing those of previous years. Indeed 7,572 arrivals surpass the totals for all of 2015, and nearly match all of those arriving in 2016 (see chart below). Spain has also surpassed the number of seaborne migrants who have died in 2017, reaching a total of 235 in 2018 through 27 May, more than all of any of the previous four years. Deaths in these waters also are rising every year, nearly doubling from 2014 to 2015, and then nearly doubling again from 2016 to 2017. Having reached the 2017 total—224 drowned men, women and children—in less than five months of 2018, it's possible that this may be the third year of the past five when annualized Western Mediterranean Sea deaths have doubled (see chart below). Most recently, four people died and an estimated 14 went missing when a boat capsized on 24 May off the coast of Kenitra, in Morocco. Twelve survivors managed to swim to the shore, while the remains of two men and two women, of Moroccan nationality, washed up on Benmansour beach.

Worldwide, IOM’s Missing Migrants Project has recorded 1,178 people who died or went missing while migrating in 2018. In the Mediterranean alone, 655 people have lost their lives at sea since the beginning of 2018, which is more than 1,000 fewer than the number of deaths recording to this point last year (see chart below).

In the Central Mediterranean, the body of a young man was taken ashore in Siracusa on 26 May by the Italian Coast Guard vessel Dattilo. According to survivors’ testimonies, he was sick and very weak before departing from Libya, and tragically did not survive the journey.

There were several other additions to the Missing Migrants Project database since last Friday’s update.

In Europe, the remains of a young migrant were found on 25 May in a stream near the Col de L’Échelle mountain pass, along the dangerous route from Italy to France that crosses the Alps. This is the third body retrieved in this area in the last two weeks. In North Africa, the remains of a Guinean migrant were found on 26 May in a forest near the Melilla border fence, in Nador, Morocco.

In Mexico’s southern state of Veracruz, a Honduran migrant was killed after falling from a freight train in the town of Tierra Blanca El Viejo. This tragic accident took place on 26 May, the 14th death by freight train recorded in Mexico since the beginning of 2018. In Libya, at least 15 migrants were killed by smugglers in the town of Bani Walid on 23 May. They were shot at while attempting to flee. Twenty-five other migrants were injured and required treatment for gunshot wounds.

In addition, the Missing Migrants Project recorded three deaths on the US-Mexico border. The remains of one man were found by US authorities on 24 May in Laredo, Texas, while Mexican civil protection authorities recovered another body in Nuevo Laredo on 26 May. On the same day, the remains of another migrant were retrieved near the Reynosa-Hidalgo International Bridge. The identities of those who died are currently unknown.