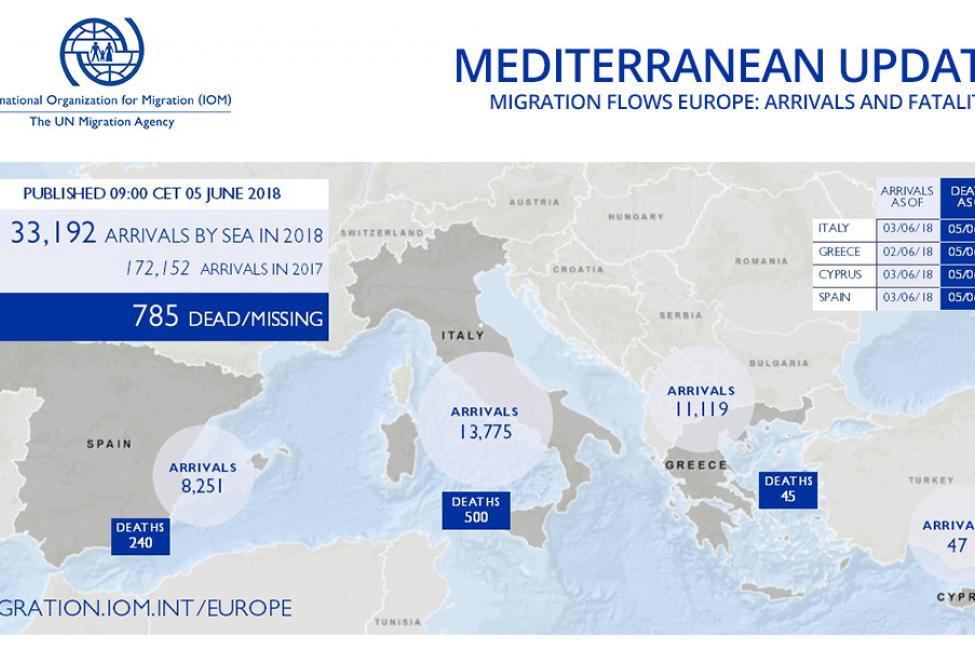 Geneva – IOM, the UN Migration Agency, reports that 33,192 migrants and refugees entered Europe by sea through the first 22 weeks of 2018. IOM reports that deaths over the weekend on all three major Mediterranean routes marked the first time in 2018 that fatalities spread across the entire littoral in this way. The estimated 125 men, women and children drowned in waters off Turkey, Tunisia, Algeria, Spain and Morocco made 1-3 June the Mediterranean’s deadliest for migrants this year.

“This is the first time this year that we recorded three incidents on the three routes over the same weekend. The incident in Tunisia, with 112 deaths, is also the deadliest recorded in the Mediterranean this year,” said Julia Black of IOM’s Missing Migrants Project in Berlin. She added IOM recorded 100 deaths in a single incident on 9 January off Al Khums, in Libya, and 100 more deaths off Zuwara on 1 February.

This past weekend, however, was not the deadliest in recent times. Black reported that the Mediterranean’s five deadliest days since 1 January 2017 were the weekend from 15 to 19 June last year, when  286 people died in the Mediterranean – divided between  281 on the Central Mediterranean route linking North Africa to Italy, and five in the waters of the Western Mediterranean linking Africa with Spain.

In other words: Mediterranean arrivals at this point in 2018 are running at under half last year’s level on this date, and about 16 per cent of 2016’s volume at this point in the year. Deaths, too, are much lower than at comparable periods of the past two years. In 2017 IOM’s Missing Migrants Project reported 1,650 deaths through 4 June; at this time in 2016 the figure was 2,512 – or over three times 2018’s estimated total of 785.

IOM Rome’s Flavio Di Giacomo noted that a shipwreck occurring off the Tunisian coast on Saturday night was responsible for most of the weekend’s carnage.  According to testimony or survivors, migrants were travelling on a boat carrying 180 people. By Monday it was reported that 68 migrants had been rescued and 60 bodies had been recovered. That left approximately 52 missing, Di Giacomo said.
Arrivals to Italy continue to be very low, compared with recent years, Di Giacomo said. In Spanish waters so far this year, IOM Madrid’s Ana Dodevska reported Monday that a total of 3,121 migrants have been rescued on the Western Mediterranean route through all of May – compared with 835 for the entire month of May last year. That, plus 503 in June, brings to 8,251 the total number of men, women and children who have been rescued trying to enter Spain by sea this year (see charts below). In the Mediterranean alone, 785 people have lost their lives at sea since the beginning of 2018.

In the Western Mediterranean, the Spanish maritime safety agency rescued 41 people from a sinking boat on 2 June. One person had already died when the rescue team arrived; tragically, the body could not be recovered. On the same day, the remains of two people, including one woman, washed up on a beach near Tangiers, Morocco.

IOM Greece’s Kelly Namia reported Monday that over five days (29 May-2 June) the Hellenic Coast Guard reported there were at least three incidents requiring search and rescue operations off the island of Lesvos and Samos. The Coast Guard rescued 73 migrants and transferred them to these respective islands.

Namia reported that besides those 73 another 71 arrived during the five days, landing in Megisti, Rhodes and Kos and bringing to 11,119 the total number of irregular migrants entering Greece via sea since 1 January – for an average of around 72 persons per day (see charts below). Worldwide, IOM’s Missing Migrants Project has recorded 1,312 people who died or went missing while migrating in 2018 (see chart below). In the Mediterranean alone, 785 people have lost their lives at sea since the beginning of 2018. On Saturday night, a boat carrying approximately 180 people capsized off the coast of Kerkennah island, in Sfax, Tunisia. Tunisian authorities have rescued 68 survivors and recovered 60 bodies during a search and rescue operation which is still underway.

The remains of the 60 victims have been transferred to the Habib Bourguiba Hospital in Sfax. At least 48 of the deceased are Tunisian, while for the remaining 12 the nationality is unknown. According to survivors' testimonies, approximately 180 people were on the boat when it sank – therefore an estimated 52 remain missing.

Additionally, the Turkish Coast Guard reported that on 3 June 2018, nine people died and one went missing after the boat in which they were travelling sank four kilometres southeast of Kekova Geyikova island, off the coast of Turkey´s Antalya province. The search and rescue team saved three men and a woman, while a fishing boat rescued another man. Six children have perished during this tragic and disastrous incident.

In Europe, the Missing Migrants Project team recorded another death on the Kupa/Kolpa river, on the Slovenia-Croatia border: on 3 June, the body of a man was retrieved from the river near Gornje Prilišće, Croatia.
Missing Migrants Project data are compiled by IOM staff but come from a variety of sources, some of which are unofficial. To learn more about how data on migrants deaths and disappearances are collected, click here.
Download the Latest Mediterranean Update infographic here.