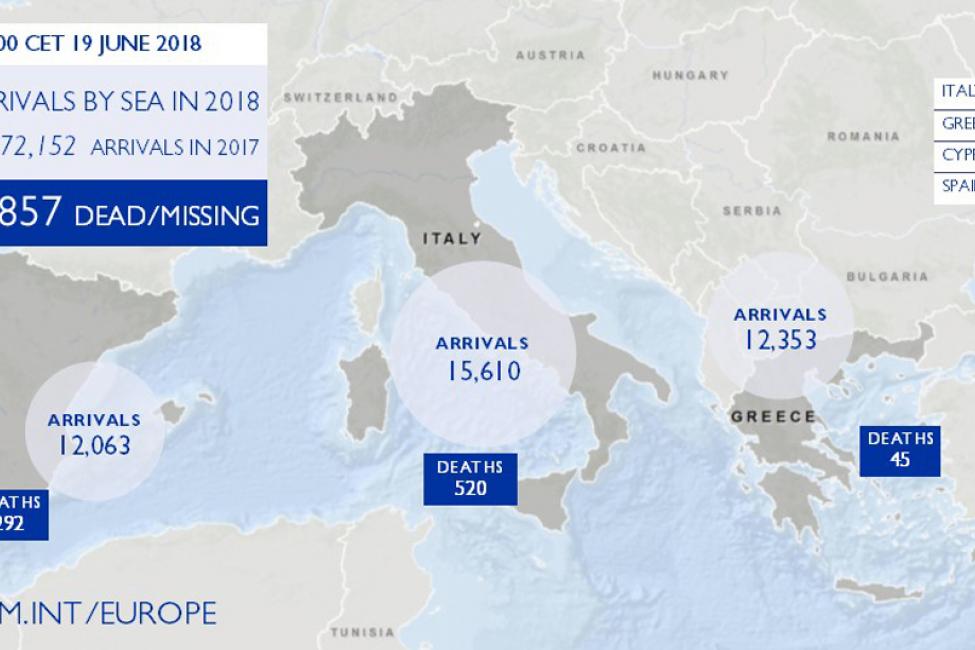 Geneva – IOM, the UN Migration Agency, reports that 40,073 migrants and refugees entered Europe by sea through the first 24 weeks of 2018. In other words: Mediterranean arrivals at this point in 2018 are running at under half last year’s level on this date, and about 18 per cent of 2016’s volume at this point in the year.  Deaths, too, are much lower than at comparable periods of the past two years. In 2017, IOM’s Missing Migrants Project reported 2,106 deaths through 19 June; at this time in 2016 the figure was 2,999 – or over three times 2018’s estimated total of 857.

This past weekend saw a surge of activity in Spanish waters, which so far this year have seen the arrival of 12,063 men, women and children, reports IOM Madrid’s Ana Dodevska. Spanish arrivals in June are now nearly 4,000, by far the heaviest volume of the year so far (see charts below). Dodevska reported the following developments between Friday and Monday (15-19 June):

She also reported these points from the arrival of the rescue vessel Aquarius on 17 June:

IOM Libya’s Christine Petré reported that on Sunday the Libyan Coast Guard returned to Libyan shores 76 migrants (62 men, 12 women, two children) who received emergency primary health assistance including pregnancy care for two women. Food was also provided at the disembarkation point and all migrants were registered by the Libyan Coast Guard. The migrants, the majority from Nigeria, Guinea and Senegal, departed from Azzawiyah in one rubber boat. Following the assistance, the migrants were transferred to Tajoura detention centre, where IOM will follow up with further assistance including protection and Voluntary Humanitarian Return (VHR) screenings.

No fatalities were reported. Petré said that so far this year, 7,243 migrants have been returned to Libyan shore by the Libyan Coast Guard and added that last Thursday (14 June), IOM assisted 157 stranded migrants returning home to Nigeria on one chartered flight. Among the migrants were 14 medical cases and one unaccompanied migrant child. IOM Libya has assisted 14,785 since the scale-up phase started 28 November 2017 and a total of 27,916 migrants have returned home from Libya with IOM’s assistance since 1 January 2017.

Nonetheless, the Mediterranean remains a dangerous place for irregular migrants. In 2018, some 857 people have lost their lives at sea since the beginning of January.

In the Central Mediterranean, the NGO Médecins sans Frontières (MSF) reported that two people went missing in the rescue conducted by the Aquarius ship off the coast of Libya on the night of 9 June. MSF staff interviewed survivors and learned that two young men, a Senegalese and a Nigerian, were lost at sea during a complicated rescue in which one of the boats broke apart.

While the Aquarius was sailing to the Spanish port of Valencia, the Guardia Costiera vessel “Diciotti” disembarked 937 survivors and the remains of two migrants in Catania, Italy on 11 June.

On 12 June, the US Navy ship “Trenton” rescued 41 people from a boat in distress off the coast of Libya, and observed approximately 12 bodies in the water which, unfortunately, could not be recovered during the rescue operation. The 41 survivors were transferred to an Italian Coast Guard ship on 17 June and will disembark in Italy soon. Additionally, the Italian Coast Guard ship “Dattilo” arrived to Catania on 17 June and disembarked 523 migrants and the remains of one person who had died after being rescued off the coast of Libya.

In the Western Mediterranean, at least 48 people lost their lives since last Thursday. On 14 June, the Spanish maritime safety agency, Salvamento Marítimo, recovered the body of a young man and rescued 11 survivors in the Gibraltar Strait. On Friday, the remains of four migrants were retrieved during multiple rescue operations conducted in the Gibraltar Strait. On Sunday, four migrants were rescued from a sinking boat 18 miles south of Cabo de Gata, Almería. According to their testimonies, 47 people were on the boat when they departed from Morocco. A merchant vessel retrieved one body in the Alboran sea on Sunday evening; therefore, an estimated 42 people remain missing and are presumed dead.

Avgeropoulou reported that besides those 237, another 191 irregular migrants arrived during the five days, landing in Chios, Rhodes, Oinouses and Kos, bringing to 12,353 the total number of irregular migrants entering Greece via sea since 1 January – an average of around 74 persons per day (see charts below). Worldwide, IOM’s Missing Migrants Project has recorded 1,508 people who died or went missing while migrating in 2018.

There were several additions to the Missing Migrants Project database since last week’s update. On the US/Mexico border, three people drowned in the Rio Grande while trying to cross into the US from Mexico: on 10 June, the remains of a man were found near Campo Las Águilas in Piedras Negras, Coahuila, while on 13 June another body was recovered in Piedras Negras, near Éjido El Moral. Mexican civil protection authorities recovered the remains of another migrant on 17 June near International Bridge III in Nuevo Laredo, Tamaulipas.

In southwest Texas, at least five people were killed and several others injured in a vehicle accident on Sunday, 17 June. Four migrants died in the crash, which took place near Big Wells, Dimmit County, about 50 miles from the border with Mexico. A fifth person died later at the hospital.