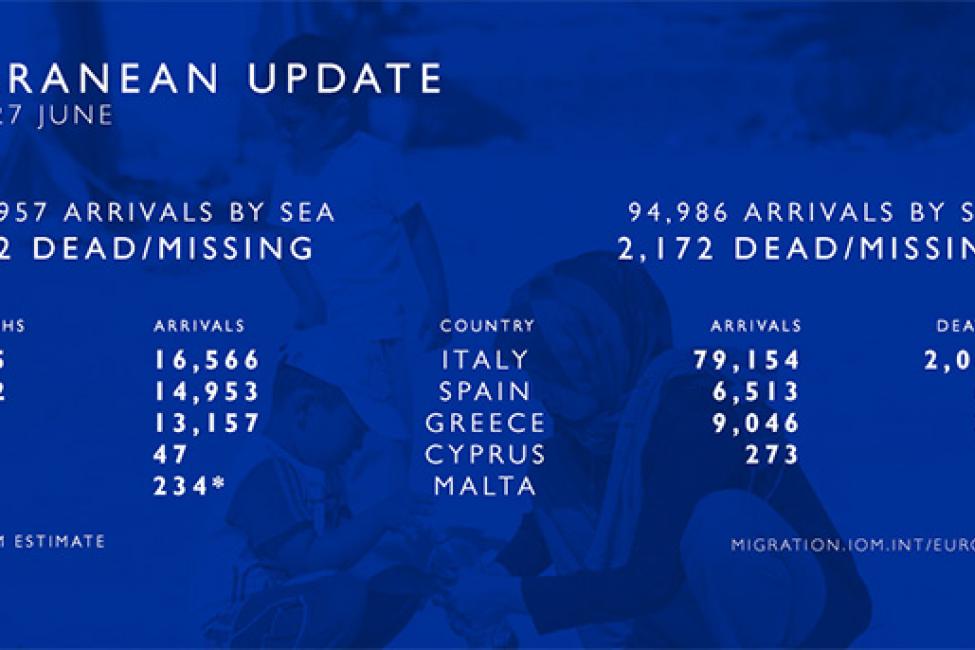 Geneva – IOM, the UN Migration Agency, reports that 44,957 migrants and refugees entered Europe by sea in 2018 through 27 June, with just around 38 percent arriving in Italy and the remainder divided between Greece (29%) and Spain (33%). A small number of arrivals have been reported landing this year to Cyprus and Malta, 47 and 234 migrants, respectively, or less than 1% of all Mediterranean Sea arrivals. Another 12 migrants were reported arriving between 25-27 June. Through that date the total number of sea arrivals to Greek territory since January 1 is 13,157 (see chart below).

For the month of June, nearly twice as many migrants have arrived by sea to Spain than to Italy, nearly three times as many as have arrived in Greece.

IOM Madrid’s Ana Dodevska reported Thursday that total arrivals at sea in 2018 have reached 14,953 men, women and children who have been rescued in Western Mediterranean waters through 27 June. Nearly half of that total—6,791 people—arrived only in the past 27 days (see charts below).

Worldwide, IOM’s Missing Migrants Project has recorded 1,659 people who died or went missing while migrating in 2018. In the Mediterranean alone, at least 972 people have lost their lives at sea since the beginning of the year (see chart below).

Since earlier this week, Missing Migrants Project has recorded the deaths of 10 more people on the US-Mexico border that occurred in May and June.  All of these migrants were recovered in Texas, except for one, a man between 30 and 35 years old, whose remains were found after a drowning in the Rio Bravo near Reynosa, Mexico.

Five migrants also died in vehicle accidents in Southern Europe this week.  Two men from Bangladesh died in a car crash between Radovish and Shtip, the former Yugoslav Republic of Macedonia.  Seventeen others survived.  In Greece, three people died and seven survived in a crash on the Egnatia highway, near Alexandropoulis.