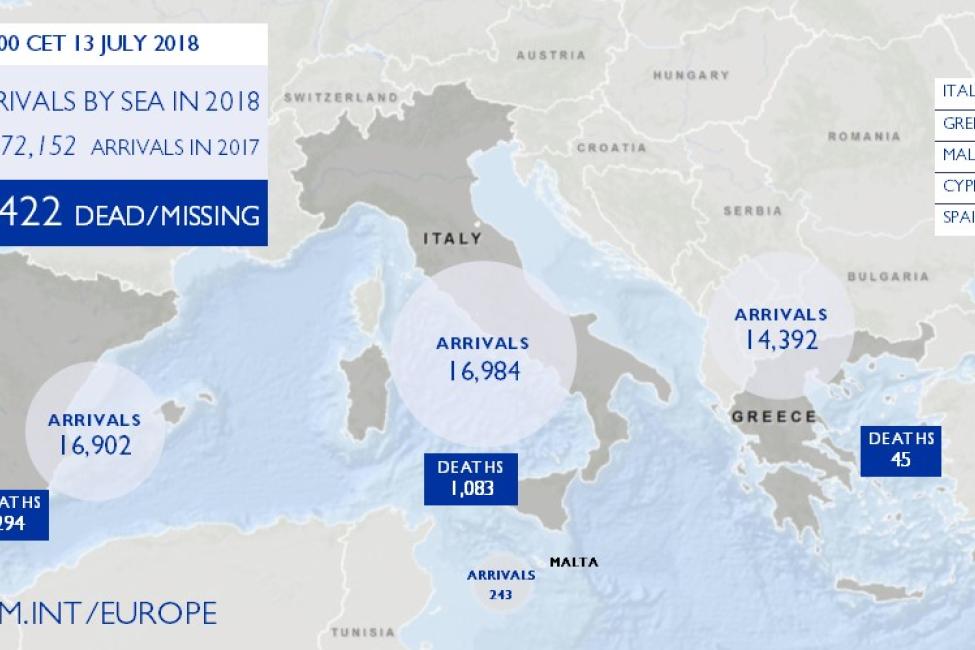 Arrivals to Italy and Spain are nearly identical, both just shy of 17,000 migrants, both destinations accounting for 35 per cent of the region’s arrivals. However, Spain continues to be the preferred destination, accounting for well over half of all arrivals since 1 June.

IOM Rome reported Thursday that the number of irregular migrants arrived by sea to Italy thus far in 2018 is at 16,984 migrants: a number that is over 80 per cent lower than last year in the same period.

The downward trend appears to be accelerating (see chart below): monthly arrivals to Italy this year have topped the 4,000-person mark just once, in January. For the previous two years, monthly arrival totals to Italy regularly exceeded 10,000, and 20,000 during summer months. IOM Libya’s Christine Petré on Thursday reported that during the day yesterday (12 July) the Libyan Coast Guard was in the midst of a search and rescue operation concerning two rubber boats, with more than 100 migrants between them.

IOM’s emergency teams were waiting Thursday at disembarkation points preparing to assist migrants with direct assistance including food and water and medical care. Petré added that during the first 193 days of 2018, a total of 11,380 migrants have been returned to Libyan shore by the Libyan Coast Guard, an average of almost 60 per day.

Since 1 July, however, the remains of 21 migrants have been found along the Libyan coast.

IOM Madrid’s Ana Dodevska reported Thursday that total arrivals at sea in 2018 have reached 16,902 men, women and children, irregular migrants who have been rescued in Western Mediterranean waters through 11 July.

Slightly over half of all landings – 8,752 people – occurred just in the past 41 days. Moreover, sea arrivals to Spain by irregular migrants already have surpassed 75 per cent of all of 2017 arrivals, and exceed the arrivals of 2015 and 2016, combined (see charts below).

IOM Spain also reported Thursday on its assistance in the relocation to France of 78 migrants who arrived on the Aquarius Rescue ship in recent weeks, after a series of interviews that took several days to complete before these 78 migrants were able to travel. Two others remain in Spain due to medical reasons. Once their health conditions permit them to travel, IOM will arrange their transfer to France.

The charter flight departed Thursday at 11:20 from Valencia Airport. The majority of the migrants were from Sudan (70%) and the rest were from Eritrea, Ethiopia, Chad, Guinea and Libya. Ninety-four per cent were men and 6 per cent women.

IOM Athens’ Antigoni Avgeropoulou said Thursday that IOM learned of three incidents during a two-day stretch, 9-10 July, where the Hellenic Coast Guard (HCG) carried out search and rescue operations off the islands of Lesvos, Samos and Chios. The HCG rescued a total of 95 migrants and transferred them to those islands.

Another 65 migrants were reported landing at Kos without Coast Guard assistance and 65 more to Lesvos, Samos and Chios, bringing to 225 the total number of arrivals during those two days. Through that date the total number of sea arrivals to Greek territory since 1 January is 14,392 (see charts below). IOM’s Balkans team reported Thursday that, based on available data, more than 3,300 irregular migrants were intercepted by the border authorities in Bosnia and Herzegovina, Montenegro and Albania in June 2018, five times more than a total of 649 registered in the first six months of 2017.

As previously reported, the most significant increase was observed in Bosnia and Herzegovina where authorities registered a total of 2,744 in June alone, reaching a total of 8,034 since the beginning of the year (eight times more than the 1,116 registered in the whole of 2017).

Historical data on monthly arrivals indicate a gradual increase in arrivals to Bosnia and Herzegovina since last summer that reached its peak in June 2018. In August 2017, authorities reported 97 irregular entries, a 54 per cent increase compared to 63 reported in July same year. Since then numbers have kept rising, reaching a peak in June 2018.

An estimated 330 new irregular migrants were registered in Bosnia and Herzegovina on a weekly basis between February and June 2018, ranging from 68 reported between 26 February and 4 March and 736 registered between 4 and 10 June 2018. Majority of all irregular migrants were of Pakistani origin, followed by those from Syrian Arab Republic, Islamic Republic of Iran, Iraq, Morocco and Algeria (read more here).

Worldwide, IOM’s Missing Migrants Project has documented the deaths of 2,151 people while migrating in 2018 (see chart below).

Most recently, at least three people died on the US-Mexico border. On 1 July, Mexican civil protection authorities recovered the remains of a young man from the Río Bravo near Nuevo Laredo, in Tamaulipas. Another young migrant drowned trying to cross the Río Bravo on 9 July. His body was recovered near Ciudad Miguel Alemán, also in Tamaulipas.

On 6 July, US Border Patrol officers found the remains of a man near highway 98 in El Centro, California. He died of dehydration shortly after crossing the border from Mexicali.

There were two other additions to the Missing Migrants Project database since Monday’s update. On 5 July, a 40-year-old man died after falling from a freight train near Torréon, in Mexico’s state of Coahuila. The Missing Migrants Project team also received information about another train-related death which took place in Mexico earlier in May: a young migrant was killed by a freight train near El Carrizo, Sinaloa.

While probably an underestimate, 19 people are known to have died in Mexico as they travelled on top of cargo trains in 2018. A similar number have drowned this year in the river separating Mexico from Texas, which is slightly fewer than at this time in 2017. Last year a total of 48 migrants are believed to have drowned in the Río Bravo.