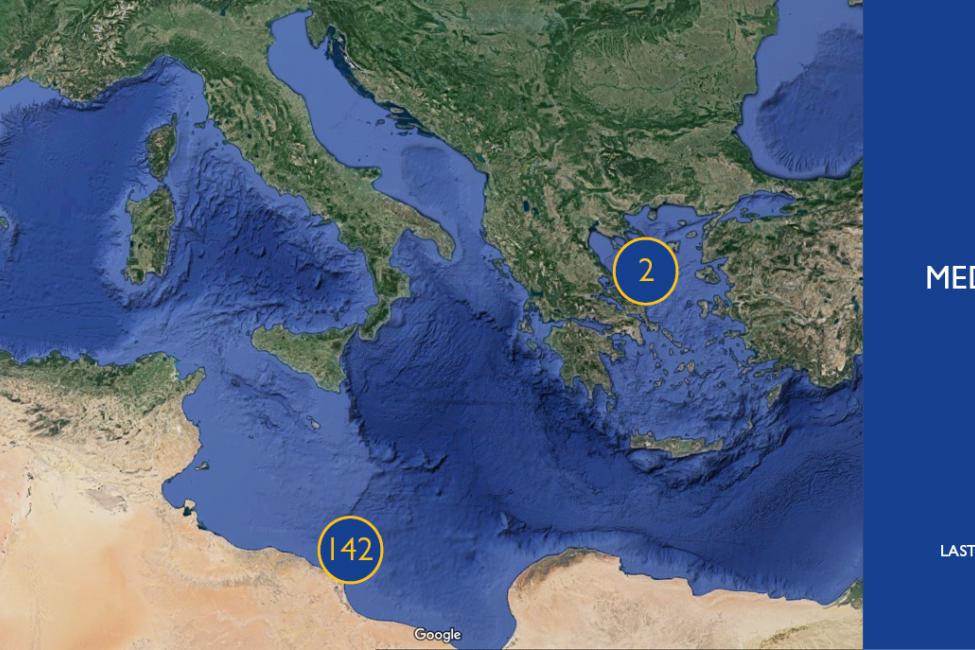 Geneva – The International Organization for Migration (IOM) reports that 4,883 migrants and refugees have entered Europe by sea through the first 20 days of 2019, a slight increase over the 4,466 arriving during the same period last year. Deaths on the three main Mediterranean Sea routes through almost three weeks of the new year are at 203 individuals, compared with 201 deaths during the same period in 2018.

At this point in 2017 a total of 3,156 migrants or refugees had landed in either Greece, Spain or Italy after crossing the Mediterranean, and IOM had recorded a total of 228 deaths.
See Table 1

Nonetheless, IOM’s Missing Migrants Project (MMP) reports that January 2019 marks the fourth straight year in which January has seen at least 200 migrants and refugees drowning trying to reach Europe via one of three Mediterranean Sea routes. The worst was in 2016, when 370 people died in January crossings. Those fatality numbers had been dropping – to 254 and 243, respectively, in 2017 and 2018 – and could drop again this month depending on what occurs over the next 10 days.

The last time fewer than 200 migrants drowned in January in these waters was in 2015, when 82 died in January. In 2014, IOM recorded just 12 deaths of seaborne Mediterranean migrants in January.

The tragedy continued this past weekend, when scores of people lost their lives in several shipwrecks on the Mediterranean.

On 17 January, a boat with 54 people on board (including three women) capsized in the Alborán Sea, in waters between Morocco and Spain. The boat had departed from Nador, Morocco, five days earlier, and many of its occupants came from a single district in southeastern Mauritania. Two Spanish NGOs received distress calls to two of their emergency hotlines shortly after departure. Search and rescue operations conducted by Spanish and Moroccan rescue services could not locate the boat, however.

A single survivor was rescued by a Moroccan fisherman on 17 January, and he was hospitalized in Morocco. Staff from Spanish NGO Caminando Fronteras spoke to him in the hospital, and he confirmed the tragic news that his 53 fellow travellers drowned at sea. No remains have been recovered.

The following day (18 January), three men were rescued 50 miles off Libya from a sinking boat by an Italian Navy helicopter and brought to Lampedusa, Italy. IOM staff spoke to the three survivors, who said the boat carried 120 people on board. Based on their testimony, IOM estimates that 117 people went missing and presumably drowned at sea before rescue services could reach them. According to the survivors, 10 women, one of them pregnant, and two children were on board.

IOM Libya reported on 20 January that the Libyan Coast Guard recovered two bodies and apprehended 141 people from a boat off the coast of Tripoli. Survivors reported that they had spent two days at sea before being intercepted, and many of them required emergency medical care.

In the Eastern Mediterranean, the Hellenic Coast Guard retrieved the body of a 23-year-old man off the Greek island of Farmakonisi on 18 January. According to the NGO Alarm Phone, he was travelling with a group of 53 people, among them seven women and ten children, who reported to the NGO that he had fallen overboard shortly before arriving to the island.

IOM Italy
IOM Rome’s Flavio Di Giacomo on Monday that through Sunday 155 migrants have arrived by sea to Italy, according to the country’s Ministry of the Interior. January 2019 is on track to record the lowest monthly arrivals total in more than three years. Di Giacomo added that the NGO ship “Sea-Watch 3” rescued 47 migrants on Saturday. It remains unknown where the craft will receive authorization to land.

IOM Rome on Monday offered further information on what survivors of the Friday shipwreck off Libya told IOM staffers who took their testimony in Lampedusa.

Migrants told IOM staff they had been brought to two separate buildings described as “hangars” before their departure: in one of them, traffickers had put some 100 people of mixed nationalities, age and gender; in the other, only 28 Sudanese male adults. Just hours before departure the latter group was brought over to join the others, although only 120 or so were allowed to board. The survivors speculated that the eight left behind – all from Côte d'Ivoire – lacked sufficient funds for the crossing.

From the hangar, the 120 migrants walked to the beach, led by six Libyan males. The three survivors also reported to IOM that their 12-meter dinghy, which left directly from the beach and not from a dock, started taking on water after about 10-11 hours of navigation, due to high waves.

At one point, when a migrant navigating the boat took a phone to call for help, the survivors reported that agitation and a wave of unrest spread rapidly among the people on board, who feared return to Libya. They said they would have preferred dying instead.

IOM confirmed late Monday that the Sierra Leonian-flagged cargo vessel Lady Sham returned 144 migrants to Libya. It remains unclear when and from where in Libya these individuals departed. IOM staff counted 26 women and four children among those taken to a detention centre in Misrata. IOM staff are monitoring their condition and assessing their needs.

IOM believes the adoption of the Global Compact for Safe, Orderly and Regular Migration represented a landmark moment in the pursuit of international cooperation on migration for the benefit of all.  The Global Compact on Migration, as it is based on the principles safe, orderly and legal migration and can and should be the basis sharing the responsibility to address issues of irregular migration, especially the Mediterranean emergency, now in its seventh year.

Said Federico Soda, director of the IOM Coordination Office for the Mediterranean in Rome: "Until Libya can be considered a safe port where protection is guaranteed, governments must establish a safe and orderly disembarking mechanism in the central Mediterranean.” IOM Greece
IOM Greece’s Christine Nikolaidou said on Monday (21 January) that from Friday (18 January) to Monday, the Hellenic Coast Guard (HCG) reported at least three incidents requiring search and rescue operations off the island of Farmakonisi and of the port of Alexandroupolis. The HCG rescued a total of 78 migrants and transferred them to those spots.

Those 78 arrivals were among some 465 IOM recorded in the four days between 17 and 20 January arriving at the islands of Farmakonisi, Samos, Lesvos and Chios and bringing to 1,166 the total number of sea arrivals to Greece this year (see chart 8.b).

*Unofficial data collected by IOM Greece and the Greek authorities of arrivals by sea.

IOM Greece also provided new data breaking down the top nationalities of irregular migrants apprehended by Greek authorities as they attempted to enter Greek waters from Turkey and elsewhere (see charts below). Among the findings from the past year: although seizures at sea grew in number by almost 3,000 men, women and children (to 32,742 from 29,884), many traditional sender countries showed a sharp decline.
For example, the number of Syrian arrivals dropped to 7,697 individuals in 2018 from 12,311 in 2017. At the same time Afghanistan, which replaced Syria as the top the sender on this route in 2018, nearly tripled the number of its arrivals – to 9,601 from 3,491 – while the numbers from Iraq, the #3 sender nationality in both 2017 and 2018, remained remarkably equal: 5,818 in 2017 and 5,893 in 2018. As in years past, outliers continue to use the Aegean as a bridge to Europe, even if in many cases their numbers are quite small.  In 2018 nine Haitians were apprehended attempting this crossing, as were 16 nationals of the Dominican Republic. There were also 16 nationals of Myanmar, 15 from Nepal, six from Colombia and three from Zimbabwe.

Missing Migrants Project
2019 is the fifth year of IOM’s efforts to systematically record deaths on migration routes worldwide through its Missing Migrants Project (MMP). Since the beginning of 2014, the Project has recorded the deaths of 30,602 people, and yet due to the challenges of collecting information about these people and what happened to them, the true number of deaths during migration is likely much higher.

So far in 2019, MMP documented the deaths of two men on the US-Mexico border. On 16 January, a 28-year-old Mexican man was swept away by the currents of the Río Bravo while he tried to cross from the Mexican town of Díaz Ordaz, Tamaulipas, to La Joya, Texas. On the same day, but further north, the body of a 37-year-old Mexican man was retrieved from the Río Bravo by Mexican civil protection authorities near Jiménez, Coahuila. A resident of Ciudad Acuña, he had been reported missing by his family in December 2018.

Missing Migrants Project data are compiled by IOM staff based at its Global Migration Data Analysis Centre but come from a variety of sources, some of which are unofficial. To learn more about how data on migrants deaths and disappearances are collected, click here.
See chart 3.b. For latest arrivals and fatalities in the Mediterranean, click here.
Learn more about the Missing Migrants Project.
See contacts here.