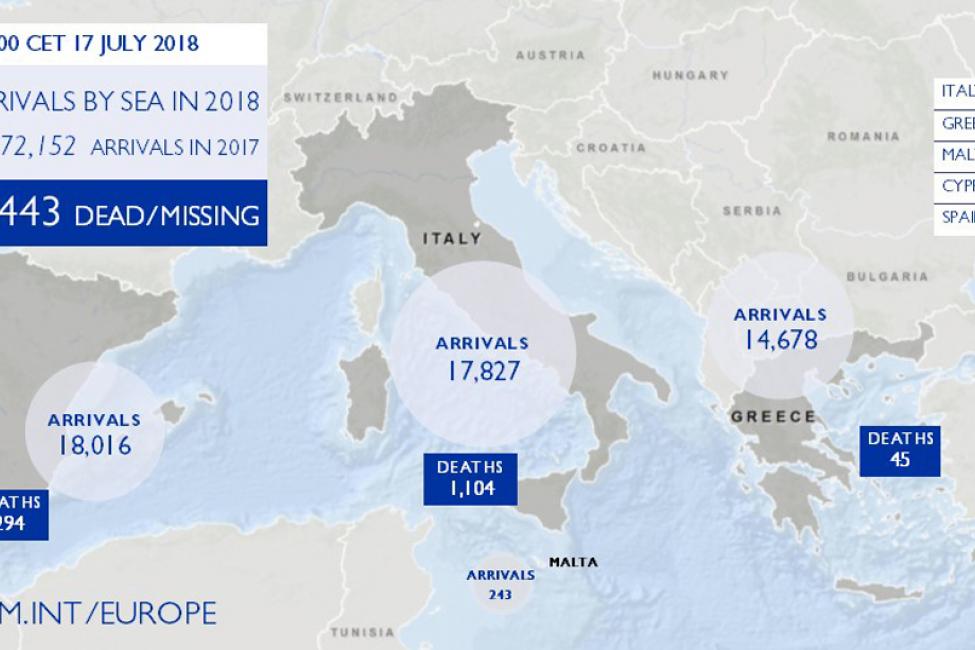 Arrivals to Spain (see chart below) overtook those to Italy this past weekend. To date just over 35 per cent of all Mediterranean irregular migrants have come via the Western Mediterranean route, whose irregular migration volume has nearly tripled those registered at this time last year.

Arrivals to Italy are nearly identical, but still trail Spain by about 200 arrivals. Greece counts about 29 per cent of all arrivals. Significantly, Greece’s arrivals thus far in 2018 are running almost 5,000 ahead of last year’s totals on this date, an increase of better than 50 per cent. Arrivals to Italy, on the other hand, are down over 80 per cent compared to 2017 data. IOM Rome’s reports Monday remind us that, while lower in volume, the Central Mediterranean route remains the region’s deadliest, with almost four times the number of drownings as Spain has recorded since 1 January, despite almost identical arrival totals.

IOM Rome’s Flavio Di Giacomo reported Monday that 447 migrants – who left aboard a wooden fishing boat last Wednesday from the Libyan port of Zuwara – arrived in Pozzallo on Sunday. He reported the group had been rescued on Saturday morning by the Monte Sperone ship of the Italian Guardia di Finanza and the Frontex vessel Protector.

Di Giacomo added they had to wait in the harbour over 24 hours before receiving authorization to disembark, adding that the migrants arrived in “severe” health conditions due to the terrible detention experienced in Libya, in informal detention centres.

Migrants arriving at the port told IOM staff that four travelling companions died last Friday. Witnesses said all were on board, although without water or food, when they spotted another vessel, still not identified. Driven by despair, about 30 people jumped into the water trying to reach the ship, which was much too far away. Four drowned, all of Somali origin, including one 17-year-old boy.  These reports were later confirmed by the friends and relatives of the four migrants, who also were on board, Di Giacomo said.

IOM Rome on Monday also released new data from Italy’s Ministry of the Interior related to the nationalities of 16,566 irregular migrants arriving by sea through the end of June. Through this half-year, citizens of Tunisia comprise the largest single group, just over 3,000 individuals or almost one of every five arrivals. Fewer than 600 Tunisians were recorded through the first half of 2017, so this year’s activity is five times greater in volume.

Conversely, arrivals from the next nine largest nationalities – Eritrea, Sudan, Nigeria, Côte d’Ivoire, Mali, Guinea, Pakistan, Iraq and Algeria – all fell, in some cases quite substantially. Just 1,229 Nigerians were reported as arrivals in 2018 – compared to 14,118 at this time last year. Pakistan, which recorded 2,242 arrivals to Italy in the first half of 2017, recorded less than a third that number – 720 – through half of 2018. Côte d’Ivoire’s arrivals dropped to about 15 per cent of last year’s totals, as did those from Guinea (see chart below).

IOM Madrid’s Ana Dodevska reported Monday that total arrivals at sea in 2018 have reached 18,016 men, women and children, irregular migrants who have been rescued in Western Mediterranean waters through 15 July. With these latest figures Spain is the Mediterranean’s most-sought destination, for irregular migrants traveling by sea, surpassing Italy and Greece. Additionally, nearly 3,000 more migrants (2,874 according to Spanish authorities) have attempted to enter Spain irregularly via the country’s African enclaves of Melilla and Ceuta.

As remarkable as Spain’s rise in irregular migration activity has been through 2018, even more important is its recent surge. Over the year’s first five months, a total of 8,150 men, women and children were rescued in Spanish waters after leaving Africa – an average of 54 per day. In the 45 days since June 30, a total of 9,866 have arrived – or just under 220 migrants per day (see charts below).

IOM Spain also reported Monday that over the past weekend Salvamento Maritimo rescue boats and Spanish Guardia Civil vessels saved more than 500 migrants in the Mediterranean. Most of them were rescued in the Strait of Gibraltar area and some others in the Alborán Sea. A majority were rescued and disembarked on the ports of Algeciras, Barbate and Tarifa; those rescued in the Alborán Sea disembarked at the port of Almería.

Despite the rapid run up of arrivals to Spain, deaths on surrounding waters appear to have abated. In July—which has witnessed the arrival of nearly 3,000 irregular migrants—Spanish authorities have noted the death of a single migrant: a 19 year-old from Sénégal, lost in Moroccan waters—although 55 drownings also were recorded the previous month, when nearly 7,000 arrivals also were recorded. June, however, was not the year's deadliest month in the Western Mediterranean. IOM's Missing Migrants Project recorded 89 migrant drownings on this route in April and 75 in February. (see chart below)

IOM Spain also reported Monday that over the past weekend Salvamento Maritimo rescue boats and IOM Athens’ Christine Nikolaidou said Monday that IOM learned of at least two incidents requiring search and rescue operations off the island of Lesvos. The Hellenic Coast Guard rescued a total of 109 migrants and transferred them to that island.

Another 177 migrants were reported landing without Coast Guard assistance at Kos, Chios, Samos and Rhodes – as well as to Lesvos – bringing to 286 the total number of arrivals during those five days. Through 15 July, the total number of sea arrivals to Greek territory since 1 January is 14,678. April remains the busiest month for irregular migration by land and sea to Greece, with a total of 7,009 men, women and children arriving. February was the lowest with 1,610 (see charts below).

IOM’s Missing Migrants Project (MMP) has documented the deaths of 1,443 migrants in the Mediterranean thus far this year. On 15 July, an estimated 17 people went missing off the coast of Sabratha, Libya. According to the testimonies of the 18 survivors who were rescued by local fishermen, there were originally 35 people on board. Unfortunately, no remains have been retrieved yet. The migrants come from Côte d’Ivoire, Ghana, Cameroon, Chad, Mali and Nigeria.

IOM Libya’s Christine Petré also on Monday reported that over the weekend (15 July), for the 18 migrants (six men, 11 women and one girl from Chad) who were rescued by fishermen off Sabratha, IOM provided emergency assistance in form of basic medical care.

On 16 July, eight migrants, including six children, were found dead inside a truck container in Zuwara, Libya. They died of suffocation due to inhalation of petrol fumes. Another 90 migrants were found in critical condition. Petré explained that the migrants are said to be from various sub-Saharan African and Arab countries, including Libya and Syria, in addition to Pakistan and Bangladesh.

According to information received, the truck – which was transporting over 100 migrants – was intercepted at around 02:00h on the morning of 16 July. The remaining 90 migrants recovered from the container were in critical condition and in need of urgent healthcare assistance.

Some of the survivors were transported to Zuwara hospital, where a hospital manager told IOM that there were 11 dead and 25 medical cases brought to the hospital. A Moroccan man among those brought in required admission to the ICU, and was referred to Sobrata hospital, as Zuwara hospital lacks ICU facilities.

An IOM medical doctor is at Sobrata hospital to assist in the reception and admission of the man, as well as assist with any present needs.

IOM Libya's Petré on Monday also reported that during the day 158 migrants (113 men, 34 women and nine children) were returned to shore by the Libyan Coast Guard. All received medical assistance through IOM’s local partner STACO. She added so far this year, 11,660 migrants were returned to Libyan shore.

IOM’s Missing Migrants Project has documented the deaths of 2,186 people while migrating in 2018 (see chart below).

In addition to Mediterranean deaths, MMP reported that on the Colombia-Panama border, a Cuban migrant drowned on 12 July in waters near Sapzurro, in Colombia’s northern department of Chocó. His body was recovered by the Colombian Navy authorities during an operation in the Gulf of Urabá in which 62 other migrants were rescued from a boat.