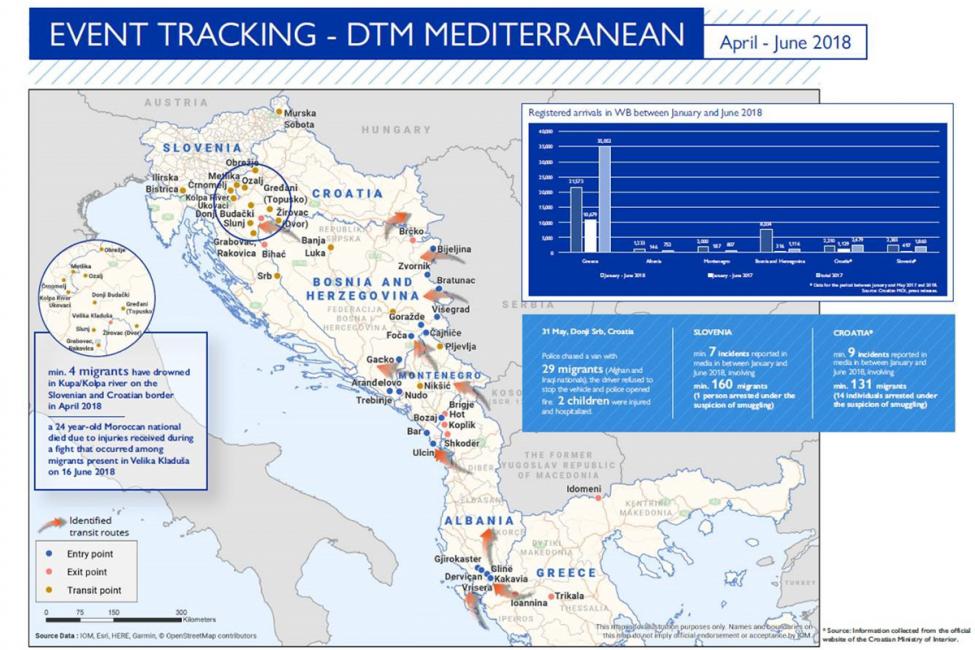 Arrivals to Spain (see chart below) this month have overtaken those to Italy. To date just over 36 per cent of all Mediterranean irregular migrants have come via the Western Mediterranean route, whose irregular migration volume has more than tripled those registered at this time last year.

Arrivals to Italy are nearly identical, but still trail Spain by just over 1,600 arrivals. Greece counts about 29 per cent of all arrivals. Significantly, Greece’s arrivals thus far in 2018 are running almost 5,000 ahead of last year’s totals on this date, an increase of better than 50 per cent. Arrivals to Italy, on the other hand, are down over 80 per cent compared to 2017 data.

IOM Rome’s Flavio Di Giacomo reported Thursday (19 July) that the number (3,136) of irregular migrant arrivals to Italy by sea in June this year was the lowest recorded by Italian authorities since 2014 (see chart below).

Nonetheless in the month of June the Central Mediterranean route linking Italy to North Africa recorded the highest number of June deaths along this channel in the past four years. In June 2018, some 564 migrants were reported drowned or missing in the waters between North Africa and Sicily. That compares with 529 in 2017, with 388 in 2016, five in 2015 and 314 in 2014. Through 18 July, 153 additional fatalities have been recorded on this route. IOM’s Missing Migrants Project has documented the deaths of 1,492 men, women and children seeking to cross the Mediterranean in 2018 – more than half of those deaths since 1 June.
Most recently IOM’s Missing Migrants Project has documented the deaths of a woman and a man whose remains were recovered in Tajoura and Garabulli, Libya on 19 July. MMP also recorded a tragedy on the Turkey-Greece border, where a woman and her three children drowned in the Evros/Meriç river on 19 July. They were crossing the river with another five people in an attempt to reach Greece when their boat capsized. The bodies of the 36-year-old Turkish woman and her one-year-old son were recovered on 20 July on the Turkish side of the river, while a search and rescue operation is still underway to locate the remains of her two other children, aged 5 and 7.

IOM Libya’s Christine Petré on Monday (23 July) reported that over the weekend, 156 migrants were returned to Libyan soil by the Libyan Coast Guard.  On Saturday (21 July), 40 migrants (31 men, eight women, one child) were returned to Libyan shore after having embarked on a rubber boat in Zuwara. The migrants received IOM’s emergency assistance including food, water and health care including pregnancy check-ups for two women. One of the women was in critical condition and received first aid before being transferred to a nearby hospital. The migrants came from Nigeria, Morocco, Egypt and Syria. Following humanitarian assistance, each was transferred to Tajoura detention centre.

On Sunday (22 July), 116 migrants (111 men, five women) who left Libya on a rubber boat in Garaboli received IOM’s emergency assistance including food, water, health care and protection screenings after being intercepted by the Libyan Coast Guard. Most of the migrants – from Sudan, Ghana, Mali, Nigeria, Côte d’Ivoire, Chad, Egypt and the Gambia – suffered from headaches, muscle pain and scabies. Those migrants also were transferred to Tajoura detention centre.

So far this year, 12,136 migrants have been returned to Libyan shore, Petré said.

IOM Madrid’s Ana Dodevska reported Monday that total arrivals at sea in 2018 have reached 19,586 men, women and children, irregular migrants who have been rescued in Western Mediterranean waters through 22 July, with nearly 1,000 arriving over the weekend. With this month’s figures Spain is the Mediterranean’s most-sought destination for irregular migrants traveling by sea, surpassing Italy and Greece.

Additionally, 3,125 migrants have attempted to enter Spain irregularly via the country’s African enclaves of Melilla and Ceuta, according to Spanish authorities.

As remarkable as Spain’s rise in irregular migration activity has been through 2018, even more important is its recent surge. Over the year’s first five months, a total of 8,150 men, women and children were rescued in Spanish waters after leaving Africa – an average of 54 per day. In the 52 days since May 31, a total of 11,436 have arrived – or just under 220 migrants per day (see chart below).

IOM Athens’ Christine Nikolaidou said Monday that IOM has learned from the Hellenic Coast Guard (HCG) of at least three incidents requiring search and rescue operations between 19 and 22 July off the islands of Lesvos, Samos, and Chios. The HCG rescued a total of 87 migrants and transferred them to those islands. At least 245 landed on those same islands without intervention – plus 79 more on Kos, Megisti and Oinouses – bringing to 411 the total arrivals during those four days.

Through 22 July, the total number of sea arrivals to Greek territory since January 1 is 15,351. IOM’s Kristina Uzelac reported that almost 13,000 irregular migrants have been registered in Bosnia and Herzegovina, Montenegro and Albania between January and the second week of July 2018. Of those, some 70 per cent have been apprehended by the Bosnian police, a total of 9,035 as of 15 July 2018. One third of all migrants registered were from Pakistan (33 per cent). Syrian nationals represent the second largest nationality group (16 per cent) followed by migrants from Afghanistan (12 per cent), the Islamic Republic of Iran (12 per cent) and Iraq (9 per cent).

Considering the limited capacity of official reception centres in the country (120 in Asylum and 100 in the Closed Reception centre), majority of migrants must stay in alternative shelters, mainly in the north-western part of the country, near the border with Croatia. IOM mobile teams have assisted more than 1,600 individuals with transportation, legal counsel, interpreter services, and medical referrals.

Reported arrivals to Albania are stable with estimated 38 to 40 apprehensions on entry into the country on a weekly basis. As of 14 July, authorities in Albania registered 1,305 irregular migrants on entry to the country and another 651 who were intercepted exiting the country to Montenegro.

Registered migrants are predominantly Syrian, Pakistani and Iraqi. Since 1 January, an estimated 2,283 irregular migrants have entered Montenegro, mainly from Albania. Almost half of all migrants were of Syrian origin (44 per cent). Pakistani nationals were the second largest group comprising 18 per cent of the overall arrivals, followed by Algerian (11 per cent) and Iraqi (7 per cent) nationals.

According to available data, irregular entries to Croatia and Slovenia also have increased between January and June 2018 when compared with the same period in 2017. In Croatia, Border Police reported 2,552 irregular entries this year, a 97 per cent increase compared to 1,297 reported in the same period last year and 11 per cent more than the total of 2,292 reported for the whole 2017.

Data from Slovenian Ministry of Interior indicate a four-fold increase in irregular entries between the second quarter of 2017 and 2018. At the end of June 2018, there were 3,266 registered irregular entries versus 748 reported at the end of June 2018 (1,930 reported in the whole of 2017). Available nationality breakdown indicates that the majority of intercepted migrants in both countries are from Pakistan, Algeria, Turkey, Syrian Arab Republic and Afghanistan.

According to available data from the official website of the Croatian Ministry of Interior, there were at least 13 incidents related to migrant smuggling in the past two months. The Croatian police arrested 21 people under suspicion of human smuggling. Arrested individuals were from Austria, the former Yugoslav Republic of Macedonia, Syrian Arab Republic, Pakistan, Iraq, Croatia, Serbia and Bosnia and Herzegovina, proving the international character of the smuggling networks operating in the region. Worldwide, IOM’s Missing Migrants Project has documented the deaths of 2,255 people while migrating in 2018 (see chart below).

Besides the Mediterranean region, MMP reported that in the Horn of Africa, at least five people drowned in the Gulf of Aden when the boat in which they were travelling with 160 people capsized off the coast of Yemen on 19 July. The remains of two women and one man were retrieved in Al Shoghayrat, Shabwa Governorate, Yemen, while according to survivors’ testimonies, two men remain missing.

On the US-Mexico border, three people died recently while trying to cross into the United States. According to the Mexican Consulate in Eagle Pass, the remains of a 40-year-old man, of unknown identity, were found in a ranch near Carrizo Springs, Texas on 19 July. The day after, Mexican civil protection authorities recovered the body of a young man from the Río Bravo/Grande, near the second international bridge in Piedras Negras, Coahuila. On 21 July, after receiving a distress call, US Border Patrol officers found the body of a 34-year-old Guatemalan man who had died of dehydration in a ranch near Hebbronville, Texas.

In Mexico, a young migrant was killed by a freight train on 19 July. He was severely injured after falling from the top of the train in which he was travelling north to the US border, and died at the hospital in Saltillo, Coahuila a few hours later.
Missing Migrants Project data are compiled by IOM staff but come from a variety of sources, some of which are unofficial. To learn more about how data on migrants’ deaths and disappearances are collected, click here.