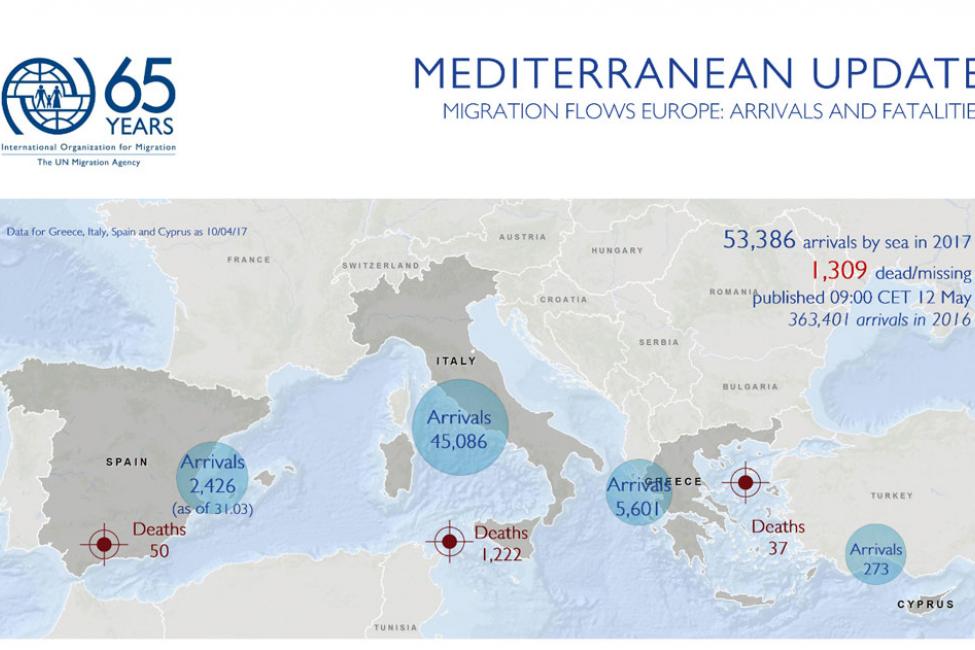 Switzerland - IOM, the UN Migration Agency reports that 53,386 migrants and refugees entered Europe by sea in 2017 through 10 May, with nearly 85 percent arriving in Italy and the remainder divided between Greece, Cyprus and Spain. This compares with last year’s 187,970 arrivals across the region through 10 May 2016.

One remarkable development is the increasing presence of Bangladeshi and Moroccan migrants, who combined make up over 7,000 of some 30,000 arrivals to Italy from North Africa so far this year. Through 30 April last year less than 1,000 nationals from those two countries (see chart below) were recorded arriving by sea in Italy. Italian officials recorded only three Bangladeshis leaving Libya through the end of April last year.

“In recent years, an increasing number of Bangladeshi nationals have been rescued at sea in the Central Mediterranean and brought to safety in Italy,” said Federico Soda, Director of IOM’s Coordination Office for the Mediterranean in Rome. “This year, by the end of February, Bangladeshis registered as the fourth highest nationality at landing points in Italy. By the end of April they were the second nationality.” In 2016 a record high 8,131 Bangladeshi nationals were registered by the Italian authorities at the landing points in Italy. In 2017, already 4,645 Bangladeshi have been registered meaning that in the first 120 days of 2017 we have already reached almost 60 percent of last year’s total.

Soda said that in recent weeks, IOM field staff in Sicily spoke with two groups of Bangladeshi migrants among those migrants disembarking at landing points in Sicily and Apulia.  They reported having to rely on “agents” in Bangladesh to organize entire journeys from Dhaka to Libya. One group told IOM that they left Bangladesh through an “agency” that promised them work visas at a cost of between USD 4,000 and USD 5,000. They added that they had been living in Libya for about a year and made their way across the Mediterranean because of this.

This same group told IOM that to reach Libya they first travelled to Dubai, then Turkey, finally reaching Tripoli from Turkey by plane. At the airport, they met their “employer”, a Libyan national, who seized their documents and exploited them at their workplace until they finally managed to leave.

The second group reported that they had been living in Libya for four years. They reported a similar recruitment method in Bangladesh. “The above-mentioned instances and the increasing number of Bangladeshi nationals fleeing Libya, suggests that there is a well-organized, transnational illicit recruitment and exploitation system in place,” Soda said. He added that, considering that these journeys involve visas, long-haul travel and middle-men or agents in both Bangladesh and Libya, it may employ dozens of operators in order to handle what may be hundreds of new customers each month. Even before the instability, Libya was a popular destination for migrant workers from Bangladesh and it is therefore not surprising that it is still possible to recruit workers to go to Libya.

Soda said that, altogether, migrants pay between USD 8,000 to USD 9,000 just to get to Libya, adding that “the money involved in this type of illicit labour recruitment may be in the tens of millions of dollars for this corridor. This does not include the journey from Libya to Italy, for which costs an additional USD 700.

The migrants do not pay the price of the journey in full, Soda explained. Smugglers reportedly accept blank checks signed by the head of the family, who may mortgage family properties and other family-owned goods to cover journey expenses within a time set by the traffickers. “If they or their relatives have paid thousands of dollars for them to reach Libya with the promise of a job there, when the job doesn’t exist or if they don’t get paid, they are trapped. Stuck with the massive debt they cannot return to Bangladesh and they keep moving, looking for ways to make any kind of income. They are at very high risk,” continued Soda.

Similar practices have also been identified in other illicit labour recruitment schemes from South Asia to other parts of the world. As an alternative, smugglers also accept a ‘postponed’ method of payment for the journey, putting migrants in touch with Bangladeshi businesspersons in Italy, who then offer them work opportunities. Often those are underground, or “unreported” (to officials) sales jobs peddling cheap toys or roses on the streets or at seaside resorts. Meanwhile, IOM Athens reported on Thursday that total sea arrivals to Greece through 3 May stand at 5,601 – with just 46 new arrivals reported since IOM’s last report on Tuesday.

Worldwide, the IOM Missing Migrants Project (MMP) reports that there have been 1,897 fatalities through 10 May (see chart below) with the Mediterranean region accounting for the largest proportion of deaths – about two thirds of the global total. During this past week Missing Migrants Project reported two more drownings in Mexico – including one on the Rio Bravo, bringing the year’s total along that deadly stretch to 33, nearly twice the number (17) who died along this river border crossing through this same period last year, and more than half the total for all of 2016, which was 65.

MMP reported one dead and 10 missing in a sea accident in the Indian Ocean, off the coast of the Comoros Islands, of migrants attempting to reach Mayotte, a department of overseas France.