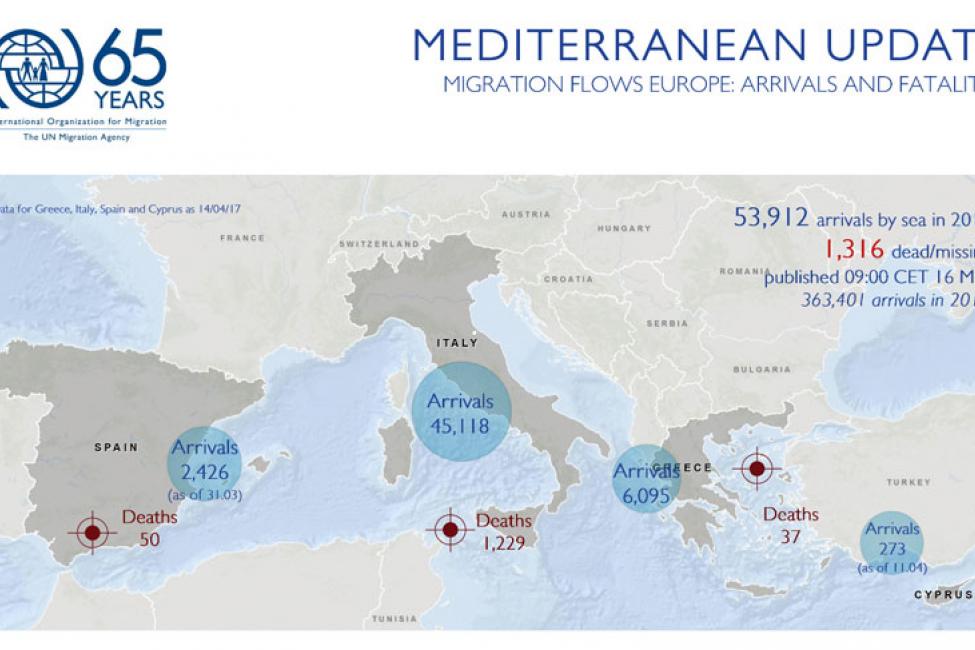 Switzerland - IOM, the UN Migration Agency, reports that 53,912 migrants and refugees entered Europe by sea in 2017 through 14 May, with nearly 85 per cent arriving in Italy and the remainder divided between Greece, Cyprus and Spain. This compares with last year’s 189,075 arrivals across the region through 14 May 2016. IOM Libya’s Christine Petré reports that on 11 May, IOM helped 258 stranded migrants – 233 men and 25 women, including four unaccompanied children and a baby girl – return home to Nigeria from Libya.
The UN Migration Agency reported 256 of the migrants, who were detained in Gharyan Al Hamra detention centre, spent their pre-departure night at Tripoli’s Trig al Seka detention centre before traveling to Nigeria the next day. The remaining two migrants previously lived in urban areas.

Arrangements for the charter flight, which departed Tripoli’s Mitiga airport and arrived in Lagos the same evening, were coordinated by Libyan authorities, the Embassy of Nigeria and colleagues at IOM Nigeria.
In addition, IOM provided pre-departure interviews, medical check-ups and facilitated exit visas for all the passengers who further received non-food items, clothes and shoes.

This latest Nigeria charter flight is part of IOM’s Assisted Voluntary Return and Reintegration assistance funded by the Kingdom of the Netherlands.

So far in 2017, IOM Libya has helped 3,392 stranded migrants return to their countries of origin. Of these, 613 were eligible for reintegration assistance. IOM Athens reported on Monday (15 May) that total sea arrivals to Greece through 14 May stand at 6,095 – an increase of over 500 in the past week. While that total is small compared to last year’s total at this same time (155,790), this week’s number indicates that the pace of 2017 arrivals from Turkey is beginning to pick up.

Greek authorities reported no new arrivals on Saturday (13 May) but rescued 105 on Thursday (11 May), 153 on Friday (12 May) and 203 on Sunday (14 May). The islands of Chios, with 221 arrivals during the past week, saw the most number of migrants or refugees landing.

Worldwide, the IOM Missing Migrants Project (MMP) reports that there have been 1,905 fatalities through 14 May (see chart below) with the Mediterranean region accounting for the largest proportion of deaths – about two thirds of the global total. During this past week, Missing Migrants Project recorded as new deaths the bodies of seven African migrants retrieved from crafts rescued by sea patrols this past weekend in Mediterranean waters between Libya and Italy. MMP also recorded the death in a train accident of a Central American migrant discovered near railroad tracks outside Choapas, in the Mexico state of Veracruz. Choapas has been the site of several violent deaths of migrants in recent years and has a reputation as the spot where kidnapping gangs ambush migrants as they journey north towards the US-Mexico border.