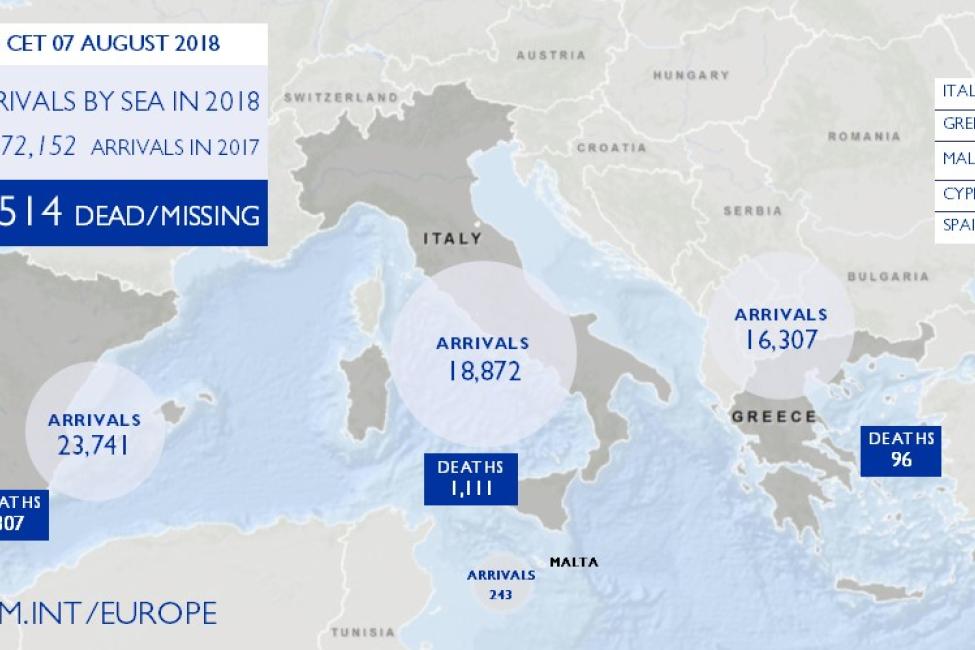 Arrivals to Spain (see chart below) lead all countries with 23,741, or just over 40 per cent of all Mediterranean irregular migrants, who this year have surpassed those coming on competing routes. Their migration volume has nearly tripled the number of those registered at this time last year, when some 8,677 had arrived through 31 July.

Arrivals to Italy trail Spain by almost 5,000. Two weeks ago, the gap between those two destination points was just under 200 individuals – an indicator of how quickly the Spanish route has surged. Italy now reports receiving less than a third of all irregular sea arrivals (around 32 per cent), while Greece continues to receive about 28 per cent, an amount that has remained steady throughout the year.

Significantly, Greece’s arrivals thus far in 2018 are running nearly 5,000 ahead of last year’s totals on this date, an increase of almost 50 per cent.  Arrivals to Italy, on the other hand, are down over 80 per cent compared to 2017 data. IOM’s Missing Migrants Project has documented the deaths of 1,514 men, women and children seeking to cross the Mediterranean in 2018 – the same number IOM reported last week. Despite the smaller volumes overall, migrants’ Mediterranean passages remains among the deadliest on earth. On a per capita basis, 2 per cent of all migrant attempts last year ended in fatality, compared with 2.5 per cent in 2018. That amounts to twenty deaths per thousand crossers in 2017, rising to twenty-five per thousand reported lost in 2018.

IOM Madrid’s Ana Dodevska reported Monday that during this past weekend, a total of 610 individuals were rescued by the patrol boats of Salvamento Maritimo and the Spanish Guardia Civil (395 on Saturday, 4 August; another 215 on Sunday, 5 August).

With those rescues, total 2018 arrivals through 5 August have reached 23,741 men, women and children – irregular migrants who have entered Europe through Western Mediterranean waters. Additionally, according to Spanish authorities, some 3,725 migrants have attempted to enter Spain irregularly via its African enclaves at Melilla and Ceuta.
Over the year’s first five months, a total of 8,150 men, women and children were rescued in Spanish waters after leaving Africa – an average of 54 per day. In the 66 days since 31 May, a total of 15,591 have arrived –or just over 235 migrants per day.

IOM Athens’ Antigone Avgeropoulou said Monday that IOM has learned from the Hellenic Coast Guard (HCG) of at least one incident between the four days (2-5 August) requiring search and rescue operations off the island of Psara. The HCG rescued a total of 96 migrants and transferred them to Psara and Chios. Another 96 landed without intervention on Lesvos, Samos and Kos – bringing to 16,307 the total number arrivals this year through 5 August (see chart below).

Worldwide, IOM’s Missing Migrants Project has documented the deaths of 2,346 people during migration to international destinations in 2018 (see chart below).

While no new deaths were reported over the weekend on any of the three Mediterranean Sea routes, reports of migrant deaths in other regions have emerged since Friday. In Europe, a young Pakistani migrant was killed during the last week of July while trying to reach the former Yugoslav Republic of Macedonia from Greece. Greek authorities arrested eight people – with whom the victim reportedly was travelling – in relation to the crime. In North Africa, the remains of three Egyptian men, who were migrating likely with the help of smugglers, were found 100km west of Al Jaghbub, in Libya.

In the Americas, records were added for nine people who were found dead after crossing from Mexico into Pima County, Arizona in the month of July. Their identities, let alone their causes of death, will likely remain unknown because of the fast rate of decomposition in the desert heat. In Texas, US Border Patrol officers found the body of a man near the town of Pharr, in Hidalgo County, who reportedly died of dehydration and heat exhaustion.

On the US-Mexico border, three people died in recent days while trying to cross into the United States. On 24 July, US Border Patrol officers responded to a distress call regarding two Mexican nationals, a father and son, who were lost in a ranch near Sullivan City, Texas. When they found them, they were taken to the local hospital, where the father died of cardiac arrest. On the same day, Mexican civil protection authorities recovered the body of a young man from the Río Bravo/Grande, near the first international bridge in Nuevo Laredo, Tamaulipas.

A fourth victim, a man, also was killed on his way through Mexico when he was hit by a train in Colonia Pascualitos, Mexicali, Mexico on 21 July.