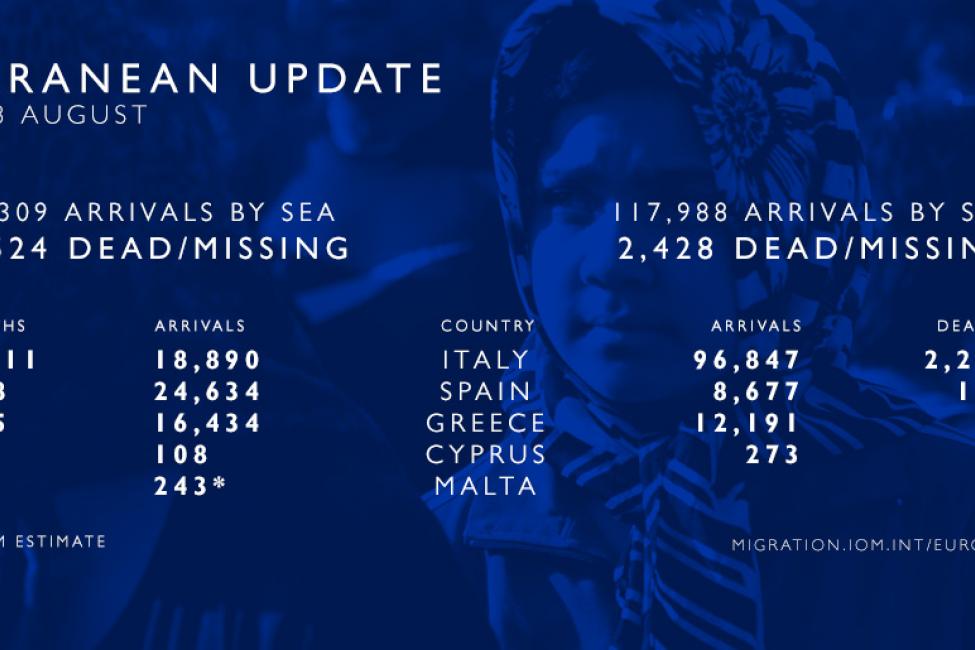 Geneva – IOM, the UN Migration Agency, reports that 60,309 migrants and refugees have entered Europe by sea in 2018 through 8 August. Arrivals to Spain during the month’s first eight days are at least five times those to either Italy or Greece, until this year both much more popular destinations for irregular migrants than Spain traditionally has been. This year’s totals through the first week of August are compared with 117,988 at this time last year and 263,436 at this time in 2016

IOM’s Missing Migrants Project has documented the deaths of 1,524 people on the Mediterranean Sea during 2018, ten during the past week.  In the early hours of Thursday (9 August), two women and seven children lost their lives off the coast of Kuşadası, Aydın Province, Turkey, which faces Greece’s Samos island.  Three men and one child were saved in the rescue effort by the Turkish Coast Guard.

On Tuesday (7 August), the Turkish Coast Guard recovered the remains of one migrant who had drowned off the coast of Demre, in Turkey’s Antalya Province. Those drownings bring to 105 the number of deaths this year in eastern Mediterranean waters, compared with 45 at this time last year and 62 for all of 2017. Previous years were much deadlier, with 434 drownings on this route through all of 2016 and over 806 in 2015. In 2014, 59 irregular migrants drowned or went missing on this route.

With this week’s deaths, the total number of migrants on this route reported lost by IOM’s Missing Migrants Project since the start of 2014 comes to 1,466.

On Thursday, IOM Athens’ Antigoni Avgeropolou reported on three incidents between the dates of 6-8 August that required search and rescue operations off the island of Kos, Samos and Lesvos. The Hellenic Coast Guard rescued a total of 71 migrants and transferred them to those islands. At least 56 other migrants made landings on several Aegean islands during the three-day span bringing to 16,434 the total number of sea arrivals to Greek territory in 2018 (see chart below).

Arrivals to Greece are running close to 35 per cent ahead of last year’s totals at this time, and around 56 per cent of the total number – 29,501 men, women and children – arriving via Greek waters in all of 2017.

IOM Madrid’s Ana Dodevska reported Thursday 1,703 irregular migrants have entered Spain through the first eight days of this month, most rescued by the patrol boats of Salvamento Maritimo and the Spanish Guardia Civil.
With those rescues total 2018 arrivals now have reached 24,646 men, women and children – irregular migrants who have entered Europe through Western Mediterranean waters. Additionally, according to Spanish authorities, some 3,959 migrants also have attempted to enter Spain irregularly via its African enclaves at Melilla and Ceuta (see chart below). Dodevska added that on Wednesday (8 August), Spanish rescuers intercepted a kayak with four migrants on board. Those individuals were transported to Algeciras. IOM’s Missing Migrants Project has documented the deaths of 2,370 people during migration to international destinations in 2018 (see chart below).

In addition to this week’s deaths on the Mediterranean, Missing Migrants Project recorded the deaths of five Afghan migrants on 2 August in a vehicle accident that took place as they travelled with 15 others from Khash to Saravan in Iran.
On 28 July, six migrants, likely from the Horn of Africa, were killed by lightning after they crossed the border clandestinely from Yemen into Jazan Province in Saudi Arabia.
In Europe, two people were hit and killed by a train at night on 20 July outside Antheia, Alexandropoulis, Greece.  In Mexico, MMP recorded the death of a migrant man hit and killed by a train outside Caborca, Sonora, Mexico. That accident occurred on 16 May.
MMP data are compiled by IOM staff but come from a variety of sources, some of which are unofficial. To learn more about how data on missing migrants are collected, click  here.