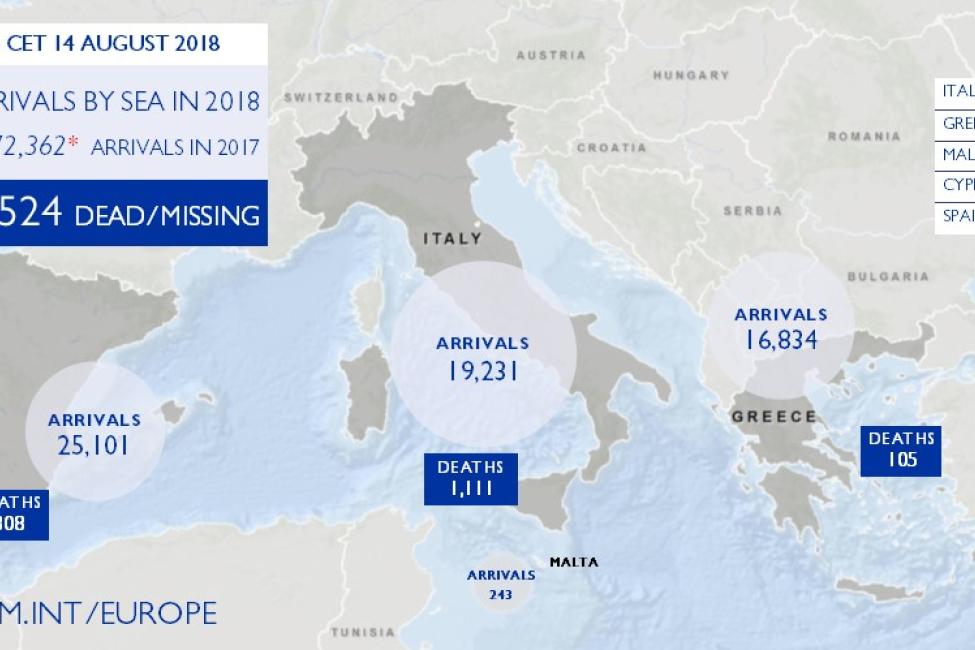 Arrivals to Spain in 2018 continue to outpace all other destinations along the littoral – with 2,170 through less than two weeks of August, or nearly the entire volume (2,476) to Spain through this date in all of 2016. By contrast, arrivals to Italy – 19,231 through 12 August of this year – are lower than arrivals recorded during certain individual months in the years 2015-2017 (see chart below). IOM Rome’s Flavio Di Giacomo on Monday said Italy arrivals for 2018 presently are running at under 20 per cent of 2017’s volumes and a slightly smaller proportion of arrivals in 2016, when some 101,587 irregular migrants entered Italy by sea.

Di Giacomo said that on Friday, the ship “Aquarius” (SOS Mediterranée-MSF) rescued 141 migrants. That ship on Monday was still waiting to enter a safe port, without indications it had arrived in any country after several days at sea.  He added that the Aquarius had rescued migrants who had been on two small wooden boats: one carrying 25 people and a second, much bigger, carrying 116 migrants (among them 73 minors, a baby and a five-year-old child). Rescuers reported that most on board were from the Horn of Africa region, adding there also were migrants from Cameroon, Côte d’Ivoire, Bangladesh, Nigeria, Morocco, Ghana and other countries.

All the rescue operations have been carried out in coordination with the Libyan Rescue Coordination Centre (RCC). Aquarius teams reported that rescued migrants affirmed that during their crossing they had met five different ships which appeared to see them but did not offer any assistance. According to media reports, Italian authorities were not available to provide authorization for access to any Italian port. Di Giacomo cited media reports saying an MSF doctor on board witnessed many migrants malnourished and weak from their time in Libya.

IOM Spain’s Ana Dodevska reported Monday that total arrivals at sea in 2018 have reached 25,101 men, women and children who have been rescued in Western Mediterranean waters through 12 August. Over the year’s first five months, a total of 8,150 men, women and children were rescued in Spanish waters after leaving Africa – an average of 54 per day. In the 73 days since May 31, a total of 16,484 have arrived – or just over 230 migrants per day (see chart below). IOM’s migration data center in Berlin on Monday reported that over the last two decades sea arrivals of some 95,000 irregular migrants have entered Spain via the Western Mediterranean, nearly half that total arriving just since the start of 2017. Over 44,000 additional migrants have entered Spain irregularly during that period via land routes to Spain’s enclaves in northern Africa (see chart below). On Monday IOM Athens’ Christine Nikolaidou reported that over four days (9-12 August) IOM learned from the Hellenic Coast Guard (HCG) of at least six incidents requiring search and rescue operations off the islands of Kos, Samos and Lesvos. The HCG rescued a total 192 migrants and transferred them to those islands.

Another 208 arrivals scattered among those islands brings to 400 the total number of arrivals during those days, and to a total of 16,834 for the year so far (see charts below). IOM’s Missing Migrants Project has documented the deaths of 2,373 individuals during migration to international destinations in 2018, through 12 August.  No new deaths on the Mediterranean routes were recorded since last week (see chart below).

Nonetheless, the MMP project did record migrant deaths along the Balkan route, a land passage often used by irregular Middle Eastern migrants who enter Greece from Turkey. Most recently, two men holding Syrian passports died in a rockslide early Sunday morning while transiting though Croatia. The two bodies, as well as 10 survivors, were found by Croatian police in the forest near Drežnica. The survivors expressed their intent to file applications for international protection and were transferred to the Croatian Reception Center for Asylum Seekers in Zagreb.

In Central America, MMP reported that a man presumed to be a Central American migrant was killed after falling from a northbound train in Tlaxcala, Mexico on 5 August. Freight trains, nicknamed La Bestia (‘the Beast’), are frequently used by irregular migrants in Mexico, but are notoriously dangerous: 147 deaths have been recorded on La Bestia since 2014, though the true number is likely higher.