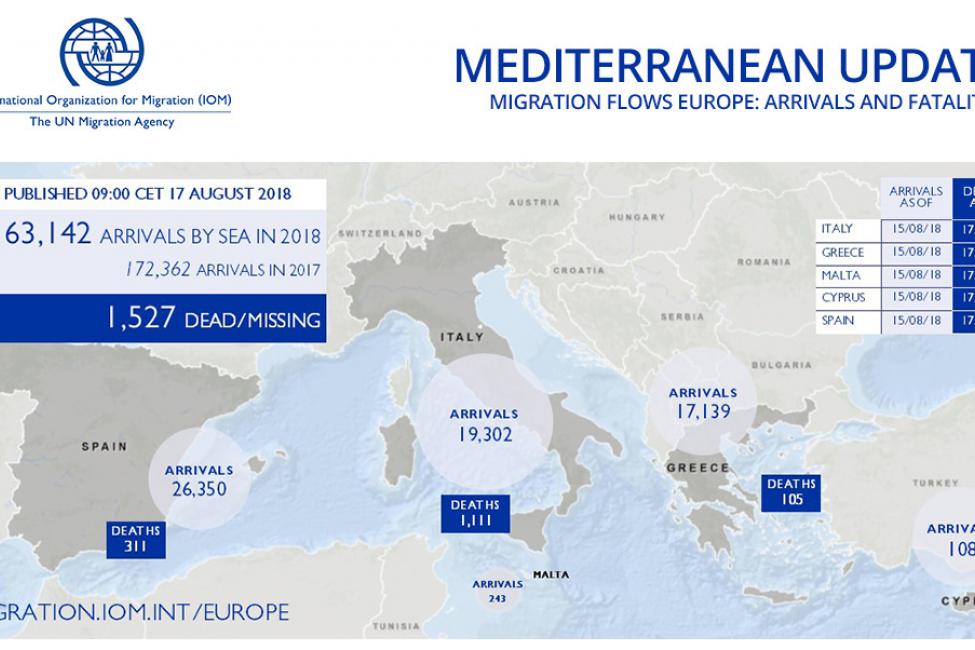 IOM Rome reported this week that Italy’s Ministry of the Interior released data on nationalities of migrants coming irregularly from Africa in 2018. Tunisians continue to comprise this year’s largest group – although just over 300 arrived in July, after more than 3,000 entered Italy between January and June. Eritrea, in second place, also added about 300 new arrivals in July, after some 2,500 arrived during 2018’s first six months. Sudan added fewer than 100 arrivals in July, after 1,488 through June. “We have noted for several months now the steep decline in departures from Libya by Sub-Saharan Africans, particularly from sender nations like Guinea, Mali and Côte d’Ivoire,” said Joel Millman, an IOM spokesman in Geneva. “These latest figures indicate the trend is becoming more pronounced. Even Nigerians seem to be cutting back their migration through Libya.”

IOM’s Missing Migrants Project (MMP) reported Thursday reported 1,527 migrants have lost their lives crossing the Mediterranean Sea in 2018, or almost seven per day. Over two thirds of those deaths have occurred on the Central Mediterranean route between Libya and Italy, even though fewer than a third of all migrant departures have been along that route.

On the Western Mediterranean route, Missing Migrants Project recorded the deaths of three people in August. On 7 August, the remains of a woman from Sub-Saharan Africa were retrieved floating near Cape Trafalgar in Cádiz, Spain. On 10 August, the Spanish rescue services saved 66 people and recovered one body from a sinking boat off the coast of Cabo de Gata, Almería. Survivors reported that one more person went missing.

It is worth noting that 2018 deaths of migrants on this Western Mediterranean route – 311 through 15 August – have barely increased despite this summer’s arrivals surge.

Through the end of May, with 8,150 migrants arriving via this route, 238 migrants perished in the Western Mediterranean – or more than all recorded fatalities in 2017, where there were 224 drownings. Yet since 1 June, just 73 migrants have been reported lost, despite a total of 18,200 arriving during those two and a half months (see chart below).

IOM Spain’s Ana Dodevska reported that total arrivals at sea in 2018 have reached 26,350 men, women and children who have been rescued in Western Mediterranean waters through 15 August. She said 1,249 were rescued over the past 72 hours.

Over the year’s first five months, a total of 8,150 men, women and children were rescued in Spanish waters after leaving Africa – an average of 54 per day. In the 76 days since May 31, a total of 18,200 have arrived – or just under 240 migrants per day. The months of May-August this year have seen a total of 21,723 irregular migrants arriving by sea, the busiest four-month period for Spain since IOM began tallying arrival statistics.

And there are still two weeks remaining in the month of August (see chart below). On Thursday, IOM Athens’ Christine Nikolaidou reported no arrivals on Monday this week but that over 48 hours on 14-15 August, Hellenic Coast Guard (HCG) units handled at least five incidents requiring search and rescue operations off the islands of Samos and Lesvos. The HCG rescued a total 208 migrants and transferred them to safety. Additional arrivals to Megisti and Lesvos bring the total number of arrivals between Sunday and Wednesday to 305 men, women and children.

Most recently, in Morocco, two men from Senegal and Guinea died when they fell from the bus in which they were being transported to the south of the country on 12 August.  On 10 August, in West Africa, seven migrants lost their lives off the coast of Bakau, the Gambia. The remains of three Senegalese men and one Gambian man were recovered during the rescue operation, while the remains of two more Senegalese migrants were found on 12 August. One person remains missing.

According to survivors’ testimonies, the deceased jumped off the boat in which they were attempting to reach Spain after the vessel caught fire. Although 79 others were saved in a rescue effort by the Gambia Immigration Department, these deaths come as a reminder of how deadly many routes have become.