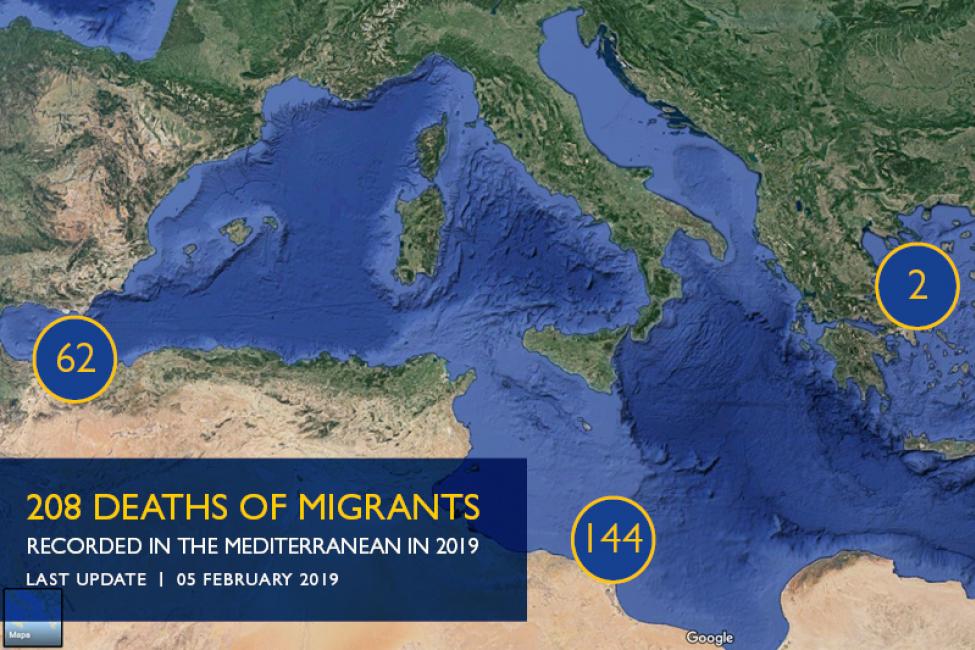 Geneva – IOM, the UN Migration Agency, reports that 6,413 migrants and refugees have entered Europe by sea through the first 34 days of 2019, a 17 percent decrease from the 7,499 arriving during the same period last year. However almost all of that decrease is attributed to the virtual disappearance of new arrivals to Italy, where only 202 people have arrived in 2019, compared with 4,723 through these same days in 2018. Spain’s arrivals this year are already more than triple those of 2018’s at this time. Arrivals to Greece also are about 33 percent higher than at this time last year (see chart below)

Deaths on the three main Mediterranean Sea routes through almost five weeks of the new year are at 208 individuals, compared with 391 deaths during the same period in 2018. (See chart 1). This includes 125 people who have drowned in the past week while trying to migrate in four different parts of the world: Gulf of Aden, Colombia-Panama border, the US-Mexico border and the Caribbean.

The Coast Guard of Djibouti has confirmed that a total of 86 people were on board boats that sank last week off the coast of Obock, Djibouti.  After sixteen people were rescued, 52 bodies have been recovered and 18 remain missing at sea. Three women are among the dead. The passengers were mostly Ethiopian Oromo. There were also Ethiopian Amhara, Ethiopian Somali and one person from Yemen. The boats left from the locality of Godoria, in northeast Djibouti, with the aim of reaching the Arabian Peninsula. The wreck happened shortly after departing, due to the heavy load on board.

The Colombian Navy offered updates from another of last week’s tragedies – the shipwreck that occurred on the Colombia-Panama border on 28 January. Eight survivors, reported to be nationals of the Democratic Republic of the Congo, were rescued off the coast of Capurganá, municipality of Acandí, in Colombia’s northern province of Chocó. The bodies of 18 more people have been recovered and six remain missing.  At least 10 children drowned in this accident. The people on board intended to reach the border with Panama to continue their journey north overland to the U.S.

As reported last week, on 28 January, the remains of two young Mexican men were recovered from the Rio Bravo, on the border between Mexico and the United States. Their families had reported them as missing on 12 January, when they attempted to cross the border into the US. The remains of another man who was travelling with them still have not been located.

Most recently, on 2 February, a migrant boat sank off the coast of Marsh Harbour, Abaco Island, Bahamas. Seventeen people were rescued, while the bodies of 28 people have been recovered so far.  All of the dead are believed to be migrants from Haiti. The Royal Bahama Defence force and the U.S. Coast Guard were both involved in rescue efforts. (see chart 3.b) To learn more about how data on migrant deaths and disappearances are collected, click here.