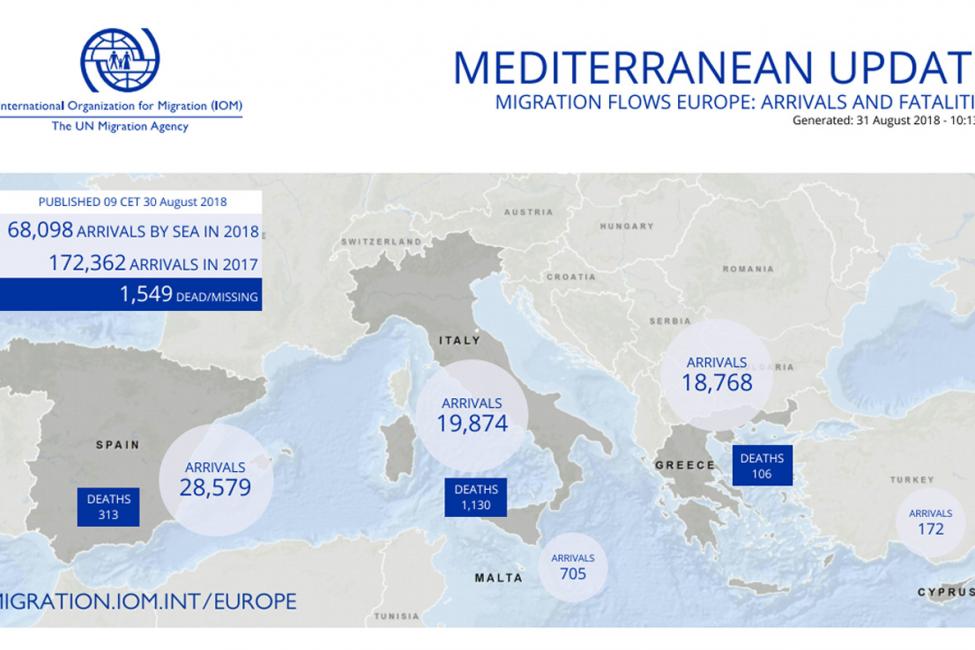 Geneva – IOM, the UN Migration Agency, reports that 68,098 migrants and refugees entered Europe by sea in 2018 through 29 August, with 28,579 to Spain, the leading destination this year. This compares with 124,015 (172,362 for the entire year) arrivals across the region through the same period last year.

Spain, with 42 per cent of all arrivals to date, continues to receive seaborne migrants in August at a volume more than twice that of Greece and more than six times that of Italy. Italy’s arrivals through late August are the lowest recorded at this point of a normally busy summer sailing season in almost five years (see chart below).

According to official Ministry of Interior figures, 19,874 migrants arrived by sea to Italy this year, 79.95 per cent less than last year in the same period. SPAIN
IOM Spain’s Ana Dodevska reported that total arrivals at sea in 2018 have reached 28,579 men, women and children who have been rescued in Western Mediterranean waters through 29 August (see chart below). She also reported that Salvamento Maritimo and Pro Activa open Arms, both announced vía their Twitter accounts that they will begin to collaborate in rescue operations in the Alboran Sea and The Strait of Gibraltar. The NGOs will work under the guidance of and in coordination with Salvamento Maritimo.

From May to August a total of 23,952 irregular migrants have arrived by sea, the busiest four-month period for Spain since IOM began tallying arrival statistics.

On Thursday, IOM Athens’ Antigoni Avgeropoulou reported that from Tuesday 28 August, the Hellenic Coast Guard (HCG) was involved in at least two incidents requiring search and rescue operations off the islands of Samos and Kos. The HCG rescued a total 55 migrants and transferred them to the respective islands.

IOM staff members are present in Lesvos, Samos, Chios, Leros, Kos and Crete Island while the organization is working closely with authorities (Frontex, the Hellenic Coastguard and the First Reception Service) to identify vulnerable migrants including unaccompanied minors, elderly migrants, migrants with medical needs and families with children.  Vulnerable groups are referred to authorities in order to be provided with the necessary care.

IOM’s Marta Sanchez reported on Thursday that IOM’s Missing Migrants Project has documented the deaths of 2,488 people migrating to international destinations in 2018.

In the Mediterranean, 1,549 people have lost their lives since the beginning of the year. Most recently, the remains of a man were recovered near Kerkennah, Tunisia on 27 August. He is believed to have died in a shipwreck that took place on 20 August off the coast of Djerba. The current death toll from that shipwreck stands at nine, with one survivor rescued by the Tunisian National Guard.

On the US-Mexico border, at least five people have died since 24 August. US Border Patrol agents recovered the remains of an individual near La Grulla, Texas on 24 August. On 26 August, the remains of another person were found in a ranch near Freer, in Webb County.

The dangerous crossing of the border into Texas claimed the life of another man on 28 August, whose body was recovered near Hebbronville. On the same day, the remains of two other men were retrieved from a canal in El Paso’s Lower Valley.

This year, 276 migrant deaths have been reported on either side of the border, up from 244 in the equivalent period of 2017. Their identification is a very difficult task, as many remains are not discovered until long after death.

Missing Migrants Project data are compiled by IOM staff but come from a variety of sources, some of which are unofficial. To learn more about how data on migrants' deaths and disappearances are collected, click here.