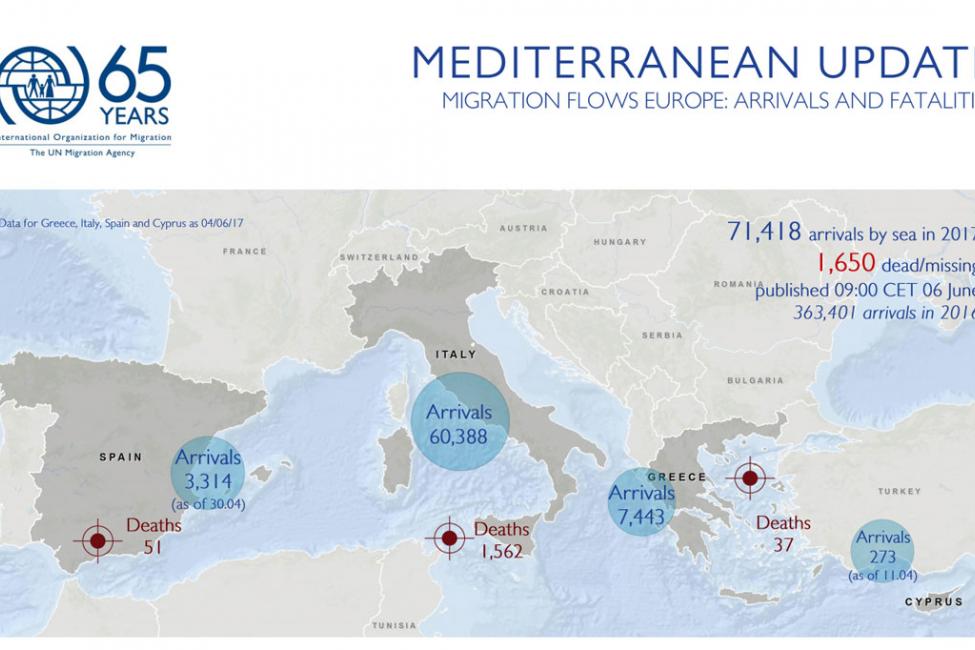 This compares with 206,790 arrivals and 2,512 deaths across the region in the same period last year.

Since the last IOM Mediterranean update (02/06), 510 migrants were rescued at sea have been brought to Italy. IOM staff are deployed at the main landing points in Sicily (including Lampedusa), and Apulia to provide legal assistance to those arriving by sea, monitor the reception conditions and support the authorities in the identification of vulnerable groups.

On Monday (05/06), 110 migrants (including 40 women and 3 children) all of African nationalities were rescued in the waters off Zliten by the Libyan Coast Guard. Following the rescue mission the migrants were taken to Al Khums detention centre. So far in 2017, 8,293 migrants have been rescued outside the Libyan coast and 236 bodies have been retrieved.

On Sunday (06/06), according to the Directorate for Combatting Illegal Migration (DCIM), seven migrants suffocated after being abandoned in a locked van close to the sea. They had been told by the smuggler that they had to wait before being taken to the boat. The survivors (reportedly approximately 30) were transferred to Triq Al Sekka detention centre in Tripoli where they were provided with medical treatment. The bodies of the seven migrants were retrieved by the Libyan Red Crescent.