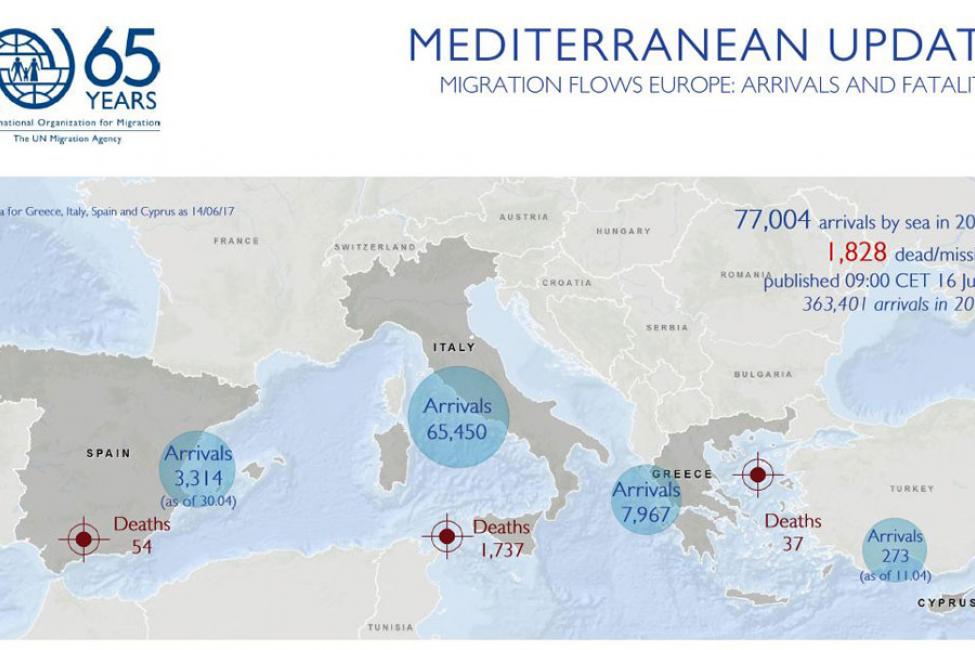 Swtizerland - The UN Migration Agency (IOM) reports that 77,004 migrants and refugees entered Europe by sea in 2017 through 14 June, with almost 85 per cent arriving in Italy and the remainder divided between Greece, Cyprus and Spain. This compares with 214,427 arrivals across the region through 14 June 2016.

IOM Rome spokesperson Flavio Di Giacomo reported that when IOM last released figures (13 June), over 3,000 migrants arrived in Italy after having been rescued since last weekend. He said new rescues took place on Thursday and were continuing Friday morning, although details of these operations were still not available to IOM teams on the ground.

The arrivals from Eritrea, Sudan, and the Gambia are down from 2016 – despite the fact that overall arrivals to Italy by sea have risen – while those from Nigeria, Cote d’Ivoire, Senegal, Morocco, Mali and Guinea are all up. In the case of Bangladesh, the increase is from 20 recorded arrivals at this point in 2016 to over 7,000 this year. Through all of 2016, just over 8,000 Bangladeshis made this same journey to Italy from Africa – a level nearly reached this year after only five months. Christine Petré, IOM Libya, reported on 13 June that the Libyan Red Crescent retrieved four bodies west of Azzawya while on the same day one body was recovered in Subratah.

IOM Guinea Conakry reported that on Tuesday (13 June), at 18:20 the special flight chartered by IOM Libya landed at the airport of Conakry-Gbessia, carrying 161 Guinean migrants – including four unaccompanied minors, five women and six infants. These migrants, who were seeking a humanitarian voluntary return to Guinea, are among the many Guineans living in irregular situations in Libya, often in very difficult conditions.

Some of these migrants were held in the Ghreian and Alsika detention centres.

Among the passengers was Alpha*, 15 years old. He recounted being a taxi driver in Abidjan before deciding to leave, taking the desert route towards Algeria, then Libya where he was arrested and detained for 11 months. Moussa*, another passenger, 17 years old, left Guinea with three high school friends. Sona*, a clothing saleswoman, left Guinea alone with her child without informing her husband. She found herself imprisoned in a detention centre for several months before IOM assisted her return home. (*The names of migrants have been changed to protect their privacy.)

IOM Guinea, SENAH (National Service of Humanitarian Affairs) and representatives of the Ministry of Guineans Abroad and the Ministry of Social Actions welcomed the returnees, who were fed before being registered and profiled in a survey. The questionnaires are designed to enable IOM to better understand the profile of returnees, and learn more about the reasons for their departure, their migratory path and their living conditions in Libya.

After this profiling step, IOM gave each migrant the equivalent of EUR 50 for secondary transport fares to reach their final destinations. Within the next three months, as part of the programme "Strengthening Governance of Migration and Supporting the Sustainable Reintegration of Migrants in the Republic of Guinea" arising from the initiative of the European Union Trust Fund, IOM will study their cases to help them find alternatives that ensure sustainable reintegration in Guinea. At the same time, IOM is providing psychosocial support to vulnerable migrants and, where necessary, additional support to address more immediate needs.

Since early 2017 (to 6 June), IOM Libya has assisted 4,443 stranded migrants to return to their countries of origin. Tuesday’s flight is the fourth one chartered by IOM to facilitate the return of Guinean migrants from Libya; the first three involved 298 voluntary returnees. This is in addition to other voluntary returns of Guinean nationals coming from Benin, Cameroon, Egypt, Morocco and Niger, also stranded in their migratory path.

Worldwide, the IOM Missing Migrants Project (MMP) reports that there have been 2,545 fatalities through 14 June (see chart below) with the Mediterranean region accounting for the largest proportion of deaths – over 70 per cent of the global total.

In the last two days, MMP has recorded one death reported by IOM Niger (after 92 migrants were rescued from the desert near Dirkou last Friday, one Nigerian migrant died shortly after) plus the incidents reported by IOM Libya of bodies retrieved on the Libyan coast (19 since Friday, 9 June).