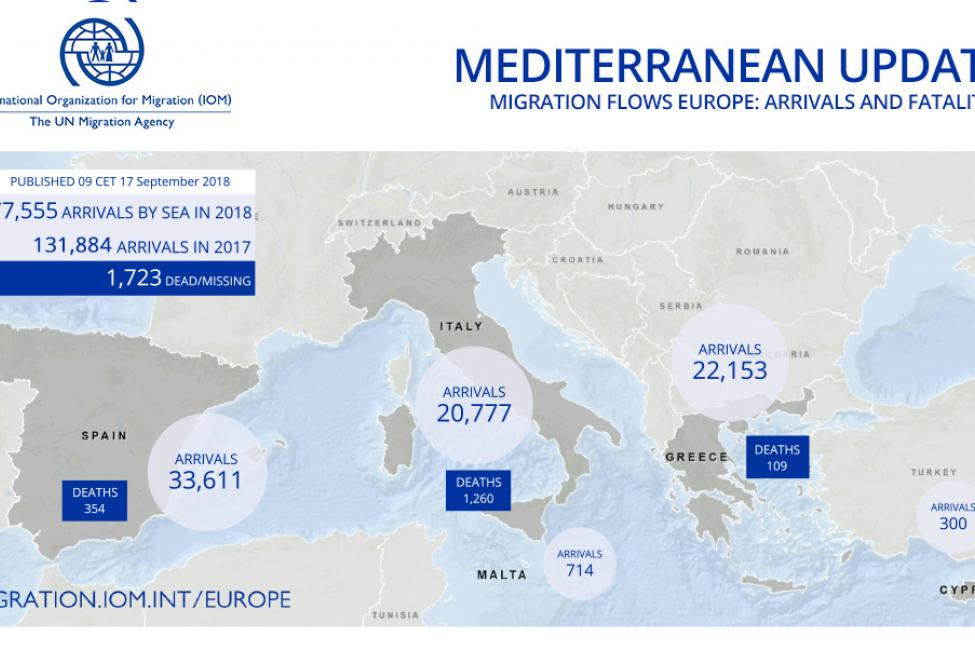 Geneva – IOM, the UN Migration Agency, reports that 77,555 migrants and refugees entered Europe by sea in 2018 through 17 September, with 33,611 to Spain, the leading destination this year.

Spain, with over 43 per cent of all irregular arrivals on the Mediterranean through this year, has outpaced

Greece and Italy throughout the summer.

Italy’s arrivals to date – 20,777 – are the lowest recorded by IOM since 2014, lower in fact, than arrivals recorded by Italian authorities during many individual months over the past five years. The same can be said for Greece, whose totals for irregular migrant arrivals through the first week of September this year (22,153) recently surpassed arrivals to Italy. It is the first time that has happened since the early spring of 2016.

The 700 irregular migrants who arrived from 1-17 September represent an average of fewer than 32 per day – compared to averages of over 2,009 per day last September and 566 per day the September before that. According to IOM data collected during the current Mediterranean emergency, during peak summer months in 2016 and 2017, daily arrivals to Italy frequently surpassed 750.

IOM staff are deployed at the main landing points in Sicily (including Lampedusa), Calabria and Apulia where they provide legal assistance to those arriving by sea, monitor the reception conditions and support the authorities in the identification of vulnerable groups. On Monday, IOM Athens’ Christine Nikolaidou wrote that from Friday, 14 September to date, the Hellenic Coast Guard (HCG) reported that there were at least 12 incidents requiring search and rescue operations off the islands of Lesvos, Chios, Rhodes and Kos. The HCG rescued a total of 573 migrants and transferred them to the respective islands.

A total of 22,153 irregular migrants have arrived in Greece by sea thus far in 2018. See Tables below for further details.

IOM staff are present in Lesvos, Samos, Chios, Leros, Kos and Crete Island, working closely with authorities (Frontex, the Hellenic Coast Guard and the First Reception Service) to identify vulnerable migrants including unaccompanied minors, elderly migrants, migrants with medical needs and families with children. Vulnerable groups are referred to authorities in order to be provided with the necessary care.

IOM’s Missing Migrants Project has documented the deaths of 2,716 people migrating to international destinations in 2018.

Most recently, three people died in the Eastern Mediterranean when trying to reach Greece. On the night of 16 September, a boat in which 19 people were trying to reach the Greek island of Kos capsized near Bağlar Bay in Bodrum, Turkey. The Turkish Coast Guard saved 16 survivors (including 8 children and 6 women) and recovered the remains of two women. Another woman remains missing.

In the Western Mediterranean, a woman drowned when the boat in which she was travelling capsized in the Alboran Sea on 16 September. The Spanish rescue services managed to rescue 54 survivors from the sinking boat.

On 13 September, the remains of three migrants, including one woman, washed up on the shores of Beni Ensar, Morocco. Their bodies were taken to the morgue of Hassani Hospital in Nador, according to local NGOs.

Additionally, the Missing Migrants Project team, based on information received from Médecins Sans Frontières (MSF), recorded the deaths of 130 migrants on 1 September in a shipwreck off the coast of Al Khums, Libya. A group of 276 people, among them survivors of the shipwreck, were disembarked in Al Khums on 2 September. An MSF medical team provided urgent medical assistance to 18 survivors and collected their testimonies. It was reported that 165 adults and 20 children were on board the boat (185 people in total), while only 55 survived. Two bodies were recovered by the Libyan Coast Guard. This indicates that 128 people went missing and presumably drowned in the shipwreck, including 20 children, according to survivors’ testimonies.

In Europe, a 24-year-old Eritrean migrant was stabbed in a parking lot near the E40 highway, in Wetteren, Belgium on 12 September. On the border between the United States and Mexico, migrants keep dying in ones and twos, often due to the hardships of the journey itself. On 11 September, US Border Patrol agents found the remains of a man who had died of dehydration in the Jacumba mountains, California. The day after, they assisted a pregnant woman and a man who got lost in the Yuha desert, California, both suffering from dehydration. Tragically, the man died before reaching the hospital. On 15 September, the body of a man was recovered from the Río Bravo by Mexican civil protection authorities.

In the first two weeks of September, at least four migrants lost their lives while transiting through Mexico. Migrants who cross Mexico to reach the border with the United States are exposed to disproportionate levels of risk of human rights violations, disappearance and death.

On 7 September, the remains of a man were found on the side of the highway between Monterrey and Reynosa, near the municipality of General Bravo in Nuevo León. He is believed to have been part of a group of 300 migrants who were detained by Mexican migration agents a few days earlier while travelling in a truck.

Although various sources suggest that migrants are dying in large numbers along the migrant trail in Mexico, the scale of deaths is difficult to measure. The discovery of mass graves containing the remains of migrants of Central America origin give evidence of the growing number of migrants who disappear in the context of their journeys through Mexico.

Most recently, the remains of 9 Guatemalan migrants who were found in a clandestine grave in February 2015 were identified. The last time their families heard from them had been on 16 February 2014. One year later, a clandestine grave containing the remains of 16 people was discovered in the municipality of Güémez, Tamaulipas. In July 2018, the State Attorney General’s Office notified the families that their missing relatives were among those found in this grave. Families of these nine men had to wait for three years and six months to find out what happened to their loved ones. Tragically, the families of many missing migrants may never receive any confirmation of life or death, never fully able to grieve their loss.

A recent report by the Mexican Commission for the Protection and Promotion of Human Rights estimated that 390 clandestine burial sites were discovered in 23 Mexican states between 2009 and 2014, containing 1,418 bodies and 5,768 unidentified remains. Unfortunately, there is no national register of clandestine graves and no effective system in place to identify and link missing persons and unidentified bodies recovered.