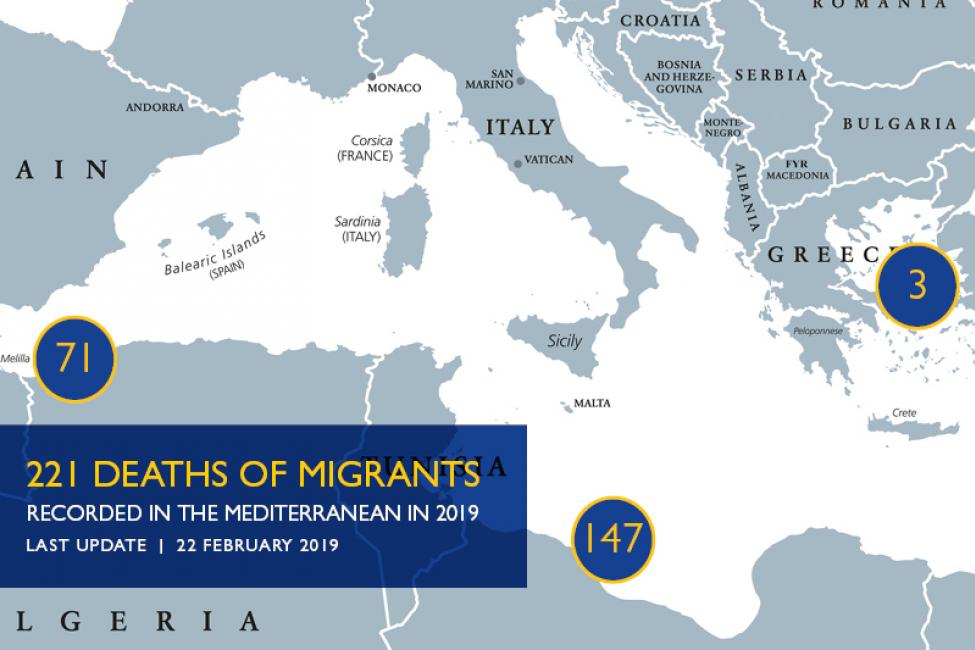 Geneva – The International Organization for Migration (IOM) reports that 8,269 migrants and refugees have entered Europe by sea through 20 February, a 15 per cent decrease from the 9,765 arriving during the same period last year. Deaths on the three main Mediterranean Sea routes through almost seven weeks of the new year are at 221 individuals – or about one half the 435 deaths that occurred during the same period in 2018 (see chart below). IOM Rome’s Flavio Di Giacomo on Thursday (21/02) reported a total of 227 migrants and refugees have landed in Italy this year, according to official Ministry of Interior figures. He added that since 1 January 2019, a total of 855 migrants have been returned to Libya by the Libyan Coast Guard – or almost four times the total arriving by sea to Italy.

IOM Spain’s Ana Dodevska reported that through 15 February, 4,891 men, women and children have arrived as irregular migrants since the start of this year – an average of some 106 per day. Through this period, irregular migrant arrivals by sea to Spain are about 60 per cent of all Mediterranean arrivals of this type; moreover, that total through just over six weeks of 2019 is almost 300 more arrivals than Spain saw through the first four months of 2018, a period during which IOM reported 4,627 irregular migrant arrivals to Spain by sea, or just under 40 per day (see chart below). IOM Greece said on Thursday (21/02) that since Tuesday, the Hellenic Coast Guard (HCG) reported one incident requiring search and rescue operations off the port of Alexandroupolis. The HCG rescued a total of 29 migrants and transferred them to that port.

Those 29 arrivals were among some 209 IOM recorded in the three days between 18 and 20 February arriving at the islands of Oinouses, Lesvos, Samos, Symi and Chios, and bringing to 2,972 the total number of sea arrivals to Greece this year.

So far in 2019, Missing Migrants Project has recorded the deaths of 392 people, 221 of those on one of three Mediterranean Sea routes (see chart below).

Since the last week, MMP reported that on 14 February, the remains of three people were found by the Libyan Red Crescent west of Sirte, Libya. The boat in which these people were travelling has not been identified; MMP researchers say there have been no other migrants missing at sea recorded off the coast of Libya since 18 January, with none so far in February.

In Europe, MMP recorded the death of a 34-year-old Algerian man, who died in a hospital in the town of Velika Kladuša, Bosnia and Herzegovina on 2 February from injuries he endured after being hit by a car near the border with Croatia.

On the US-Mexico border this week, a 30-year-old Guatemalan woman, who was travelling with her children, aged 6 and 10 years, was killed in Tijuana near the border with the US, when she was hit by a truck. The two children also were injured and now are being treated at a Tijuana hospital. Also this past week, two men died in a vehicle accident in Otay Mesa, San Diego County, California.  One man recently crossed the border from Mexico illegally and the other was the driver of vehicle and is believed to be already living in the US.  A 20-year-old-woman, who was also in the car, was severely injured.

On 14 February, a man around 25-30 years old drowned trying to cross the Rio Bravo from Mexico into the US.  He was found between International Bridge 1 and 2, near Eagle Pass, Maverick County, Texas.

On 18 February, a young Honduran migrant was killed when he was hit by a car in María del Río in the state of San Luis Potosi, Mexico. He was reported to be travelling with a caravan of migrants along a road when he was hit. The next day, another man, from Guatemala, who was travelling with another caravan, died of cardiac arrest near a border crossing point between Ciudad Hidalgo, Chiapas and Tecún Umán, Guatemala. He was 36 years old.