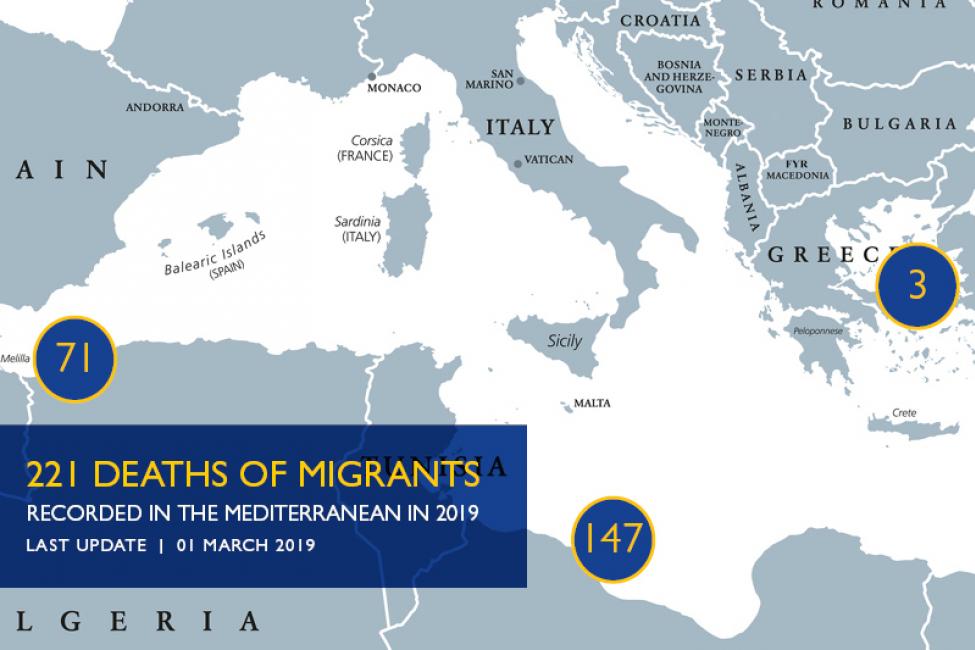 Geneva – The International Organization for Migration (IOM), the UN Migration Agency, reports that 8,956 migrants and refugees have entered Europe by sea through 27 February, a 12 per cent decrease from the 10,243 arriving during the same period last year. Deaths on the three main Mediterranean Sea routes through almost seven weeks of the new year are at 224 individuals – or about one half the 439 deaths that occurred during the same period in 2018 (see chart below).

2019 is the fifth year of IOM’s efforts to systematically record deaths on migration routes worldwide through its Missing Migrants Project (MMP).  Since the beginning of 2014, the Project has recorded the deaths of 31,340 people, including 407 in 2019 (see chart). On the irregular migration route across the Mediterranean to Europe, on 21 February, a man was found dead on a small inflatable boat in Punta del Guadalmesi, off the coast of Cádiz, Spain.  It is unknown if other people were travelling with this victim.  On 22 February, the remains of two female migrants were found on the coast of Béni Bouifrour, Nador, Morocco. They are believed to have drowned, although no information has surfaced about a vessel they may have been on.

On Sunday and Monday (24, 25 February), the Libyan Red Crescent recovered the remains of two people on the beach near Azzawya, Libya.  No identification has been made available for these victims, and the specific circumstances of their deaths remain unknown.

On 24 February, a group of Pakistani and Syrians travelling through Croatia tried to cross the Mreznica River.  After failing to locate a bridge, members of the group tried swimming across; two men were caught by the current.  Others alerted the authorities, who recovered the remains of the two men on Sunday and Monday.  In 2018, 41 of 116 migrant deaths recorded by MMP in Europe died in the Western Balkans, more than recorded in any other year by MMP on this route. So far this year at least four migrants have died there.

On the US-Mexico border, two men died when they tried to cross into California on 19 and 20 February. A young man drowned in the All-American Canal and another died shortly after crossing the border in Otay Mesa, San Diego County, when the car in which he was travelling crashed into a truck.  In Texas, two men drowned this week in the Río Bravo, near Eagle Pass. There have been 16 migrant deaths recorded along this border crossing so far in 2019, compared to 14 in the same period in 2018, 23 in 2017 and 6 in 2016.

Missing Migrants Project data are compiled by IOM staff based at its Global Migration Data Analysis Centre (GMDAC) but come from a variety of sources, some of which are unofficial. To learn more about how data on migrants’ deaths and disappearances are collected, click here.