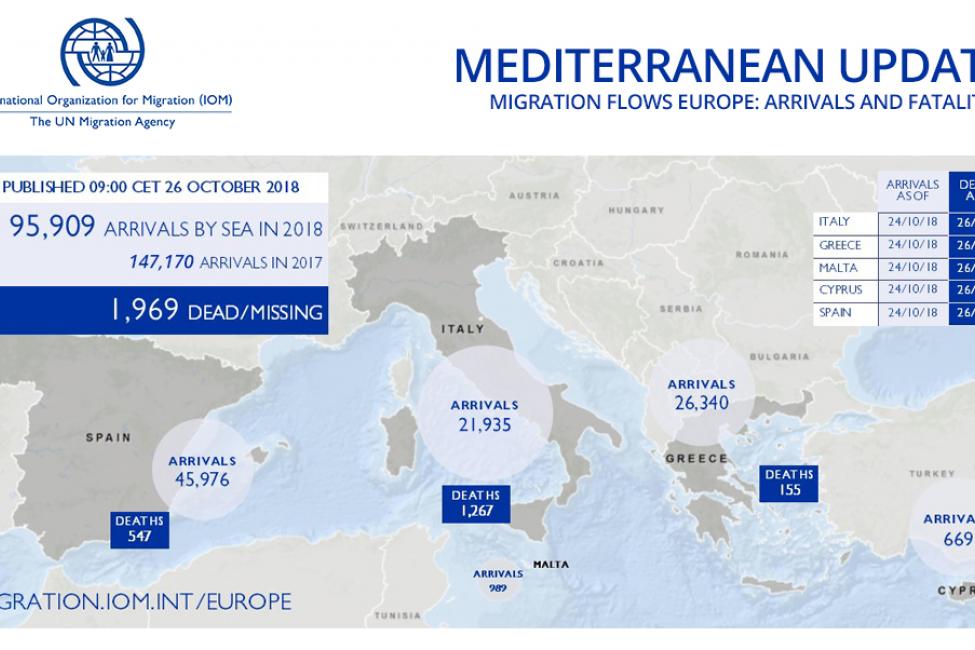 Geneva – IOM, the UN Migration Agency, reports that 95,909 migrants and refugees entered Europe by sea in 2018 through 24 October, with 45,976 to Spain, the leading destination this year. In fact, since late September’s arrivals were reported Spain in 2018 has now received via the Mediterranean more irregular migrants than it did throughout all the years 2015, 2016 and 2017 combined.

The region’s total arrivals through the recent weekend compare with 147,170 arrivals across the region through the same period last year, and 324,267 at this point in 2016.

Spain, with almost 48 per cent of all arrivals through the year, continues to receive seaborne migrants in October at a volume – about 360 daily – that amounts to almost nine and a half times that of arrivals to Italy and almost three times that of Greece (see chart below).

Italy’s arrivals through late October remain extremely low, at fewer than 1,000 for each of the past two months, although with one week remaining to be counted in October, totals this month may again cross the 1,000-person threshold (see chart below).

Significantly, IOM Libya reported this week that the total number of vulnerable migrants going home in 2018 on Voluntary Humanitarian Return (VHR) flights from Tripoli and other Libyan cities has now reached 13,694 men, women and children (including the new-born) – to some 32 separate countries of origin, or more than the 12,465 arrivals to Italy by migrants and refugees trafficked by smugglers from Libya itself. This marks the first time on record IOM has assisted the voluntary return from Libya of more migrants than the total number of irregular migrants sailing to Italy from that country.

Between 16 and 22 October IOM Libya returned 301 stranded migrants to six countries: Guinea, Côte d'Ivoire, Sierra Leone, Bangladesh, Pakistan and the Democratic Republic of the Congo. Those flights bring to 33,065 the number of vulnerable migrants returned under the VHR project since the start of 2017.

IOM Libya said these numbers do not indicate that every migrant traveling under the VHR programme is a migrant who would otherwise have sailed to Italy. IOM Libya noted increased patrolling by Libyan Coast Guard units who intercept migrants offshore and return them to Libya has had an impact on the number of irregular voyages completed to Italy this year.

IOM Spain’s Ana Dodevska reported Thursday that total arrivals at sea in 2018 have reached 45,976 men, women and children who have been rescued in Western Mediterranean waters through 24 October (see chart below).

IOM Greece’s Antigoni Avgeropoulou reported on Thursday (25 October) that from Tuesday, 23 October through Wednesday night, the Hellenic Coast Guard (HCG) reported there were at least five incidents requiring search and rescue operations off the islands of Lesvos, Samos and Farmakonisi. The HCG rescued a total of 228 migrants and transferred them to those respective islands.

Additional arrivals of 73 migrants or refugees to those same islands – as well as to Chios and Kos – over three recent days (22-24 October) brings to 26,938 the total number of arrivals by sea to Greece through 24 October (see chart below).

Arrivals to Greece in October exceed a daily average of 100 men, women and children, making this month’s traffic among the busiest flow this year (see chart below).

This week IOM’s Missing Migrants Project team recorded in the Eastern Mediterranean another death connected to the shipwreck of 22 October, when a boat carrying 34 people capsized off the coast of Bodrum, Turkey. Tragically, three children died at the hospital in Bodrum: two Palestinians and one Somali. About 27 per cent of the deaths documented this year in the Aegean Sea have been of children.

Worldwide, IOM’s Missing Migrants Project estimates that at least 3,087 people died or went missing on migratory routes across the globe in 2018, the fifth consecutive year that more than 3,000 fatalities were recorded (see chart below).

Most recently, seven Ethiopian nationals drowned in the Indian Ocean on 22 October when the boat in which they were attempting to reach South Africa capsized off the coast of Tanzania. Five people survived the shipwreck. People from the Horn of Africa continue to travel along this southern route towards South Africa, though migration is more common overland than by sea.

The increasing risks undertaken by migrants transiting through the Americas are evident in Missing Migrants Project data for the border region between Mexico and the United States. To go north, migrants frequently attempt to circumvent US Border Patrol interior checkpoints and, on those treks – often through heavy brush, in brutal heat – many migrant deaths occur. On 20 October, the remains of a Mexican man were recovered on ranch land west of Falfurrias, Texas. The following day (21 October) the remains of a Mexican man from the state of Durango were found in a ranch near El Indio, Texas. Between January and September 2018, Missing Migrants Project has documented the deaths of 339 migrants along the border, around 13 per cent more than at this same time last year.

Migrants following the caravan route of Central Americans attempting to cross Mexico in a march towards the US border this week grieved the death of a fellow migrant. A 29-year-old Honduran man died in Guatemala on 20 October; another Honduran national died on 22 October after falling from a vehicle on the highway between Tapachula, Mexico, and Huehuetan, in the southern state of Chiapas.