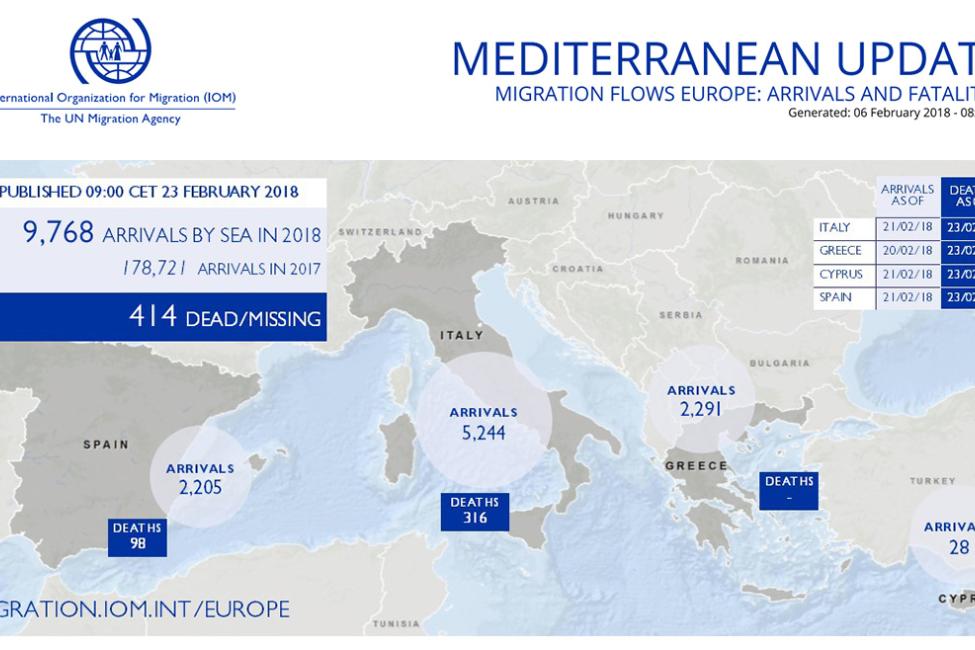 Geneva – IOM, the UN Migration Agency, reports that 9,768 migrants and refugees have entered Europe by sea through the first seven and a half weeks of 2018, with just over 53 per cent arriving in Italy and the remainder divided almost evenly between Greece and Spain. This compares with 13,799 arrivals across the region through the same period last year.

On Thursday IOM Athens’ Kelly Namia reported that over six days (15-20 February) the Hellenic Coast Guard reported there were at least five incidents requiring search and rescue operations off the islands of Lesvos and Samos. The Coast Guard rescued 144 migrants and transferred them to these islands.

Through 20 February, the total number of sea arrivals to Greek territory this year is 2,291 (see chart below).

IOM Rome’s Flavio Di Giacomo said Thursday that according to Ministry of Interior figures, 5,244 migrants have arrived by sea to Italy this year – or 51 per cent fewer than last year during the same period.

With a week remaining in the month, arrivals in Italy are well below those for the previous two Februaries of 2017 and 2016 (see chart below).

On Thursday IOM’s Missing Migrants Project (MMP) reported 414 deaths have been registered on the Mediterranean so far this year, fewer than the 468 reported at this time in 2017.
Most recently, two deaths were recorded on the Western Mediterranean route between Algeria and Spain. The remains of two migrants were found near Bouzedjar beach in Ain Témouchent, Algeria, on 18 February.
This year, at least 20 people have died trying to reach Spain from the coasts of Algeria. In the Central Mediterranean, the remains of one migrant were found in Awlad Sukr, east of Al Khums, Libya on 19 February.
Worldwide, IOM’s Missing Migrants Project has recorded 644 fatalities during migration in 2018, compared with 890 through 21 February last year (see chart below). In the Horn of Africa, a 20-year-old Ethiopian man drowned off the coast of Brom Mayfa in Yemen on 21 February. The MMP team recorded three deaths in Central America on 21 February: two men and one woman died in a vehicle accident in San Blas Atempa, Oaxaca, Mexico, as they were travelling north to the border with the United States.
MMP data are compiled by IOM staff but come from a variety of sources, some of which are unofficial. To learn more about how data on missing migrants are collected, click here.