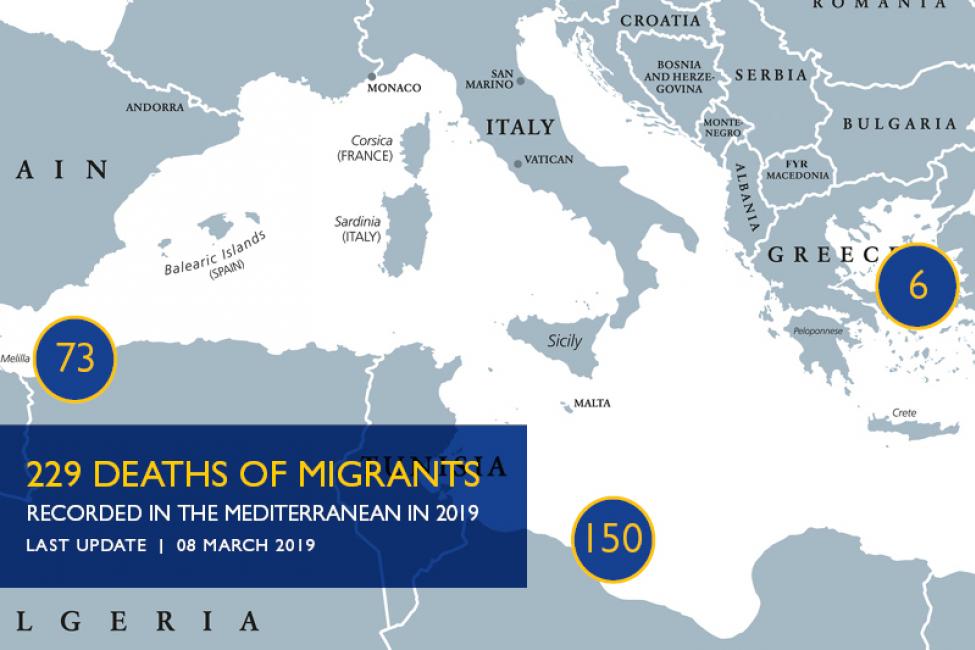 Geneva – The International Organization for Migration (IOM) reports that 9,779 migrants and refugees have entered Europe by sea through 6 March, a 13 per cent decrease from the 10,715 arriving during the same period last year. Deaths on the three main Mediterranean Sea routes through almost seven weeks of the new year are at 229 individuals – or about one half the 464 deaths that occurred during the same period in 2018 (see chart below).

IOM Rome’s Flavio Di Giacomo on Thursday reported a total of 335 migrants have arrived by sea to Italy in 2019, according to official Ministry of Interior figures. Just 60 migrants or refugees arrived in Italy in the month of February, the lowest one-month total in six years. Since 1 January, 855 migrants have been returned to Libya by the Libyan Coast Guard, according to IOM staff there.

IOM Greece reported on Thursday (07/03) that from Tuesday (05/03) up to date, the Hellenic Coast Guard (HCG) reported at least three incidents requiring search and rescue operation off the islands of Samos and Farmakonisi. The HCG rescued a total of 69 migrants and transferred them to those locations.

Those arrivals were among some 271 IOM recorded in the three days between 4-6 March arriving at the islands of Lesvos, Samos and Farmakonisi bringing to 4,020 the total number of sea arrivals to Greece this year (see chart below).

So far in 2019, the Missing Migrants Project has recorded the deaths of 419 people, 229 of those on one of three Mediterranean Sea routes (see chart below). Most recently, three people drowned in the Aegean Sea: on the night of 6 March, two twin brothers and their father were lost at sea attempting to reach the Greek island of Samos, travelling in a boat with nine other people, including the wife and mother of the two boys. Nine survivors – including four women, four men and one child, all of Afghan nationality – were transferred to the hospital of Samos.

In the first two months of 2019, at least four children have lost their lives in the Eastern Mediterranean, a tragic marker of the toll of unsafe migration. In the Western Mediterranean, the remains of a man were recovered on 3 March from waters near Ceuta, a Spanish enclave in North Africa. Details regarding his identity, country of origin, or whether he was travelling alone or with others are not known.

The MMP team also learned that earlier in February, the remains of a 3-year-old child washed ashore on El Djebel beach, on Algeria’s eastern coast, where migrants often depart on a route to Sardinia. The identity of the child or the circumstances of his death are not known.

On the Syria-Turkey border, remains of three Syrian women were found on 21 February on the banks of the Afrin river, in Turkey’s southern province of Hatay. It is believed they were swept away by the currents of the river when crossing.

In Mexico, two Guatemalan men were killed, when gunmen opened fire on three trucks carrying migrants towards the US border. Seven people were also injured in the shooting, which took place on 3 March on the Pujultic–Venustiano Carranza Highway in Mexico’s southern state of Chiapas. In Brazil, an 11-month-old baby of Venezuelan nationality died of pneumonia in a hospital in Belém on 5 March. According to media reports, the baby and his parents had recently arrived in the city of Belém and were on their journey south, after crossing the border into Brazil’s Roraima state over a month ago. This is the second death of a Venezuelan child reported in the city of Belém since the beginning of the year: a similar case was recorded on 24 February, when a 3-year-old child died of malnutrition shortly after arriving in the city with his parents.

Missing Migrants Project data are compiled by IOM staff based at its Global Migration Data Analysis Centre but come from a variety of sources, some of which are unofficial. To learn more about how data on migrant deaths and disappearances are collected, click here.