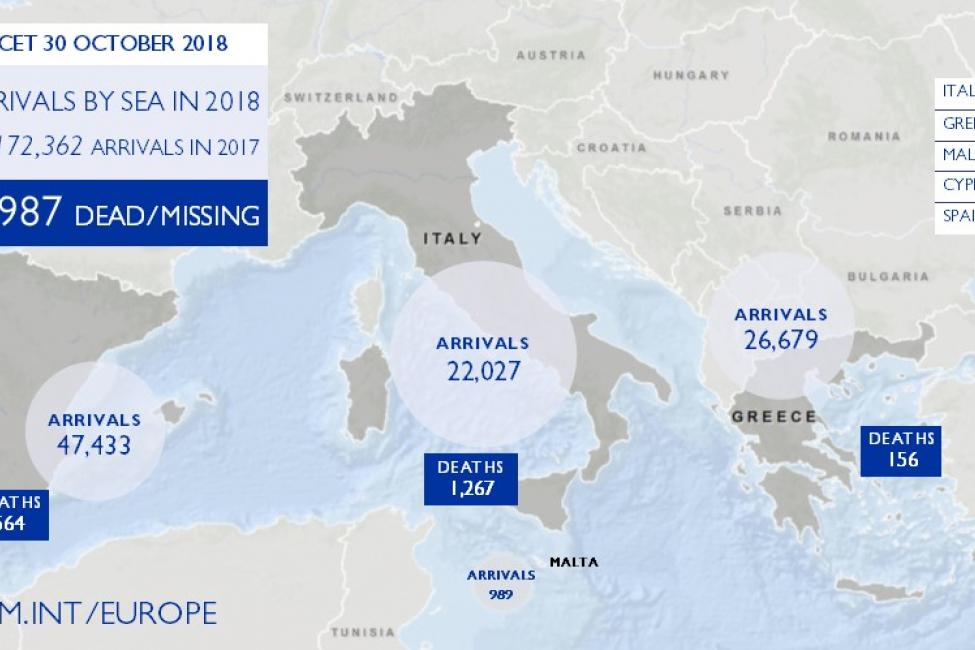 Geneva – IOM, the UN Migration Agency, reports that 97,857 migrants and refugees entered Europe by sea in 2018 through 28 October, with 47,433 to Spain, the leading destination this year, which is 48 per cent of all arrivals through the year. In fact, since late September’s arrivals were reported, Spain in 2018 has now received via the Mediterranean more irregular migrants than it did throughout all the years 2015, 2016 and 2017 combined.

The region’s total arrivals through the recent weekend compare with 147,170 arrivals across the region through the same period last year, and 334,914 at this point in 2016.

The Mediterranean remains a lethal passage for migrants, despite the sharp drop in traffic on the deadly central Mediterranean route. IOM’s Missing Migrants Project (MMP) has documented through 28 October the deaths of 1,987 irregular migrants, over two-thirds of those fatalities in the waters between North Africa and Sicily.  Last year, at this time, MMP reported a total of 2,844 deaths in the region. In 2016 it reported 4,039.

Most recently, in the Western Mediterranean, the Missing Migrants Project team documented the deaths of 17 people over the weekend. On 25 October, the remains of two Moroccan men in their 30s washed ashore on Trougout beach, Morocco. Their bodies were brought to the morgue of Hassani hospital in Nador.

One day later, on 26 October, a boat capsized off Beni Chiker, Morocco. Local fishermen rescued two survivors and brought them to shore. According to witnesses’ testimonies, there were 16 people on board. The body of a man was recovered a few hours later; therefore, an estimated 13 people remain missing. Additionally, Spanish rescue services reported that they rescued 53 people and recovered the body of a baby from a sinking boat in the Alboran Sea on 27 October.

In the Eastern Mediterranean, a 31-year-old Iraqi woman died in a district hospital in Bodrum, Turkey on 27 October. She had boarded a boat bound for Greece with her two children and ten others, which capsized near Turgutreis Cape. The Turkish Coast Guard was able to rescue them, but tragically she passed away shortly after arriving at the hospital. She was pregnant.

IOM Spain’s Ana Dodevska reported Monday that total arrivals at sea in 2018 have reached 47,433 men, women and children who have been rescued in Western Mediterranean waters through 28 October (see chart below). Arrivals by sea in October are averaging a rate of almost 360 per day. This compares with fewer than 115 per day in May and around 270 per day in September (see chart below). It is important to note that Spain has not received 10,000 irregular sea migrants or refugees during any previous month of the current Mediterranean emergency, which now goes back more than five years. That noted, it is crucial to add that months – even days – of 10,000 or more arrivals have not been uncommon during the period.

According to IOM Greece’s Christine Nikolaidou, the 12 months listed consecutively for the period of April 2015 to March 2016 each met that benchmark, and much more. The largest single month on record came in October 2015, when 211,663 migrants or refugees arrived by sea in Greece – which for that month came to an average of almost 7,000 daily. Dimitrios Tsagalas of IOM Cyprus reported Monday the arrival over the weekend of 33 irregular migrants entering the Republic at the Ledra Palace location. One was reportedly a Kurd of Iraqi nationality, the rest all Syrians: 14 men, five women and 13 children. With these arrivals, Tsagalas said the total number of migrants or refugees arriving in Cyprus this year now is 729.

One more landing took place on Monday that is not included in the total above. IOM’s Mr. Tsagalas on Tuesday reported another boat was spotted off Cape Greco by the Coast Guard in the Famagusta area Monday afternoon. On board were 12 adult males, one woman and four children, all believed to be of Syrian nationality. With this boat the latest 2018 arrival total is 746.

IOM Greece reported on Monday that from Friday evening (26 October) through Monday noon (29 October), the Hellenic Coast Guard (HCG) ecountered five incidents requiring search and rescue operations off the islands of Lesvos, Samos and Megisti. The HCG rescued a total of 213 migrants and transferred them to the respective islands.

Additional arrivals of some 176 to those same islands, plus Rhodes, over these past four days brings to 26,679 the total number of arrivals by sea to Greece through 28 October (see chart below).

This morning, IOM Greece reported two more rescue operations, total of 74 migrants or refugees, near the islands of Lesvos and Kos, occurred just before midnight Monday. Those recovered are not yet added to the data total mentioned above.

The months of September and October have been among the busiest of the year for Greece in terms of irregular migrants coming by sea. Since 1 September, a total of 7,394 migrants and refugees have entered via the Aegean, an average of 127 per day. That compares to an average of just under 80 men, women or children per day during the first eight months of 2018 (see chart below). IOM’s Missing Migrants Project estimates that at least 3,112 people died or went missing on migratory routes across the globe in 2018 (see chart below).

In addition to the devastating death toll in the Mediterranean, most recently, six Syrian nationals drowned after being swept away by floodwaters on the Syria-Turkey border on 25 October. Turkish civil protection authorities recovered the remains of six men near Turkey’s border town of Yayladagi, in Hatay province.

On the Mexico-Guatemala border, a 26-year-old Honduran man died of a head wound during clashes with Guatemalan and Mexican police on a bridge over the Suchiate river on 28 October. This tragic incident happened as a second caravan of migrants attempted to cross the border into Mexico on Sunday.