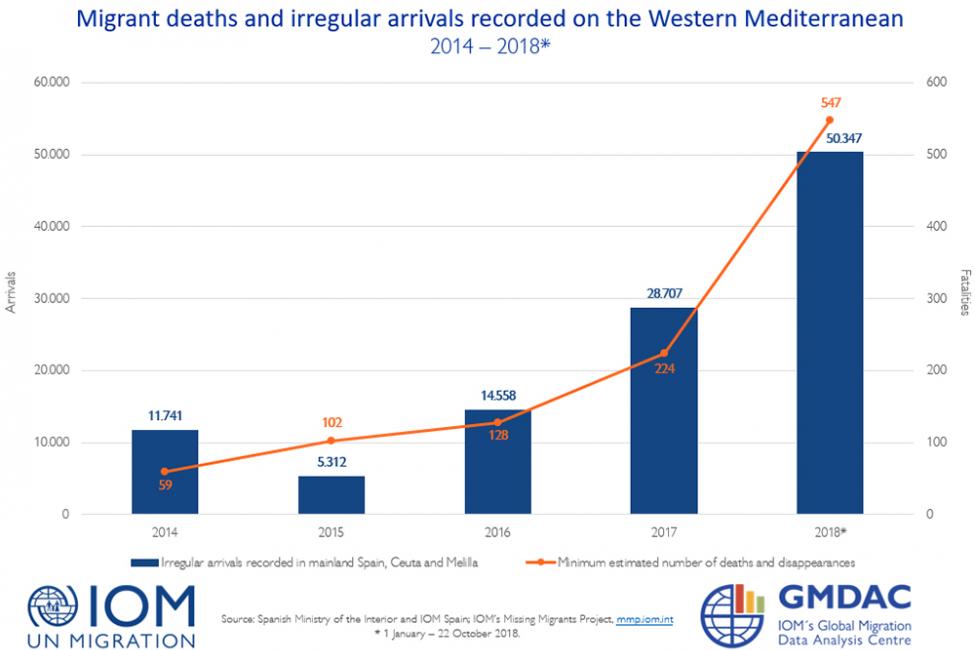 Berlin – IOM’s Missing Migrants Project (MMP) team, based at IOM’s Global Migration Data Analysis Centre (GMDAC) in Berlin, has confirmed that two migrant boats were lost in the Alboran Sea in late August and early September and at least 113 people lost their lives. Since the beginning of the year, 547 people are estimated to have died in these waters, more than double the 224 deaths documented in all of 2017.

On 30 August, a boat carrying 52 migrants, including six women (one of whom was pregnant) disappeared, according to the NGO Alarm Phone. The boat left on 29 August from Nador, Morocco, and both Spanish and Algerian authorities were involved in the unsuccessful search for the lost boat.

Days later, on 3 September, another boat, with 61 migrants on board, went missing in the Alboran Sea after it departed for mainland Spain. The bodies of 13 people were found on the shores of Morocco and Algeria in the following days.

“What’s concerning is that we’ve seen a consistent increase in the number of migrant deaths recorded in the Western Mediterranean each year since IOM began keeping track,” said Frank Laczko, Director of IOM’s Data Analysis Centre. “These numbers, however, tell only a partial story of the tragedy unfolding in the Western Mediterranean. For each person lost at sea, families are left wondering if their loved one is dead or alive.”

The families of the 113 people who disappeared in these two shipwrecks are forced to live in limbo, not knowing the fate of their loved ones. They will have no place to mourn and lay their loved ones to rest.

Unfortunately, deaths in the waters between North Africa and the Spain are not a new phenomenon. The Andalusian Association for Human Rights has documented the deaths of over 6,000 people on this route since 1997.

Laczko noted, “The increase in recorded deaths in 2018 is linked to the increase in attempted sea crossings from North Africa to Spain compared with the past five years, as well as the number of fatalities in each shipwreck.” Of the 547 deaths and disappearances recorded so far in 2018, more than half (289) occurred in seven shipwrecks in which more than 20 people died or were lost at sea. Between 2014 and 2017, two or fewer such incidents were recorded each year.

There are also strong indications that many migrants have been lost without a trace in the Western Mediterranean this year. The remains of more than 60 people have been found on beaches in Spain, Morocco and Algeria in 2018 that are not associated with any known shipwreck.

Furthermore, non-governmental organizations operating in Spain and Morocco have received numerous requests from family members reporting loved ones lost in the Alboran Sea in shipwrecks which cannot be confirmed.

IOM’s Missing Migrants Project collects data on migrant deaths from various sources, including coast guards, non-governmental and civil society organizations, and media reports. However, reports on migrant deaths are scattered and incomplete, and there are no complete data on border deaths released by Spanish or Moroccan authorities.

In general, Missing Migrants Project data on migrant deaths and disappearances are best understood as minimum estimates: the true number of fatalities during migration is likely much higher. This lack of data reinforces the marginality and invisibility of migrant deaths and leads to an environment in which deaths seem to be tolerated as an assumed risk of irregular migration. For the latest data on migrant deaths on the Western Mediterranean crossing, visit the Missing Migrants Project website here. Raw data can be downloaded from missingmigrants.iom.int/downloads.