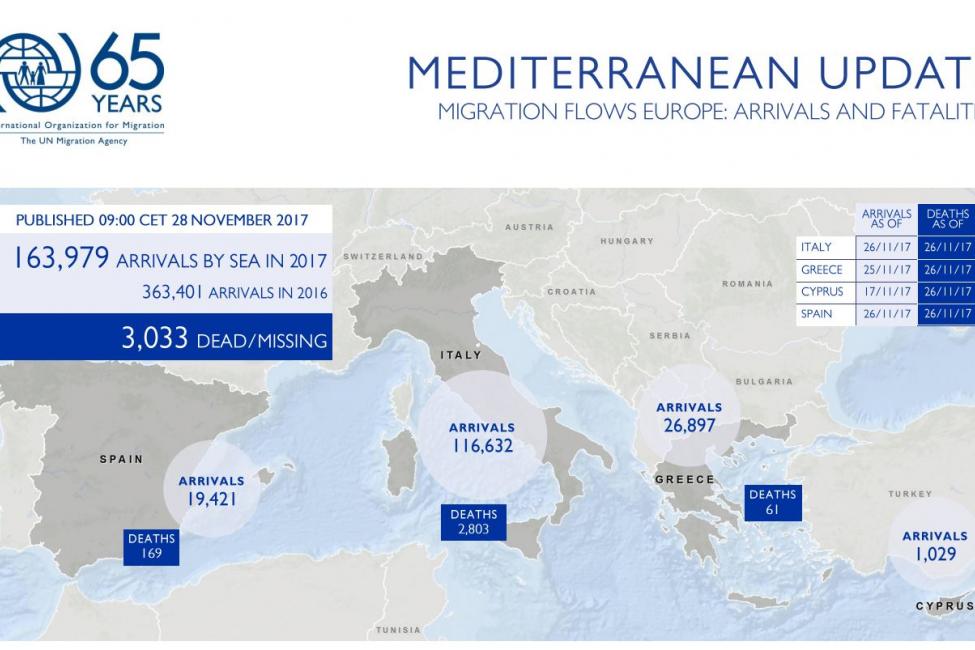 Geneva – The International Organization for Migration (IOM), the UN Migration Agency, is reporting that a grim weekend of death has resulted in the confirmation of at least 3,000 migrant or refugee deaths on Mediterranean Sea routes through 26 November 2017, marking the fourth consecutive year that IOM’s Missing Migrants Project (MMP) has reported this total.

Deaths across the Mediterranean since the October 2013 Lampedusa tragedy – a shipwreck that took the lives of over 360 victims – now have surpassed 15,000, or more than 50 per cent of all migrant and refugee deaths worldwide over these last four years.

“We’ve been saying this for years and we’ll keep on saying it: It’s no longer enough to simply count these tragic statistics. We must also act,” said William Lacy Swing, IOM Director General, on Monday. “This latest news, coming on the heels of all we have learned of open slave markets in Libya, the deprivation we see of those held by smugglers en route to the Mediterranean coast, and the difficult conditions of Libyan detention centres, all demand our attention. We must end these practices and manage migration in a way that is safe, regular and secure for all.”

IOM’s Missing Migrants Project last week reported migration along the three main sea routes of the Mediterranean had left 2,993 victims through Friday, 24 November. Over the weekend IOM learned of at least eight deaths on the Western Mediterranean route linking North Africa to Spain as well of the death of a 10-year-old Afghan boy off the Greek island of Lesvos.  Also this past weekend IOM learned at least 31 migrants perished in an incident off Libya’s coastal city of Garabulli in a boat capsizing. It is believed that many migrants went missing.

“Horrifying news this weekend as more lives are lost at sea in their search for better life opportunities,” said Othman Belbeisi, Chief of Mission of IOM Libya. “More has to be done to reduce irregular, unsafe movements of people along the Central Mediterranean route.”

Today’s total of all known and suspected drownings stands at 3,033 through Sunday, 26 November – which translates as an average of nearly ten deaths per day since the first of January.

In recent years – including 2015, when total irregular traffic by migrants across the Mediterranean surged past one million men, women and children – the 3,000 fatality threshold was breached during the late summer season. In both 2014 and 2015 IOM recorded at least 3,000 sea deaths in the region during the second half of September. Last year, when 5,000 migrant deaths were recorded in the deadliest year on record, the 3,000 mark came on 20 July.

Dates when 3,000 migrant deaths were reached in previous years:

Eugenio Ambrosi, IOM Regional Director for the European Union, Norway and Switzerland warned that the continuing alarming rate of fatalities raises serious questions about the policy and measures currently in place.

“People are still dying at sea in enormous numbers, even after years of seeing this happen repeatedly. We have to ask ourselves, why is this still happening?” Ambrosi said Monday in Brussels.

“Rescue at sea needs to be more robust and well resourced, with a clear, life-saving mandate and better cooperation among all actors involved. But at the same time, the best way to save lives is to offer migrants a way around smugglers through safe and legal bridges to Europe,” he added. The UN Migration Agency reports that 163,979 migrants and refugees entered Europe by sea in 2017 through 26 November, with about 75 per cent arriving in Italy and the remainder divided between Greece, Cyprus and Spain. This compares with 348,591 arrivals across the region through the same period last year.

IOM Rome reported Monday (20 November) 116,632 migrants arrived by sea to Italy this year: about 32 per cent fewer than last year in the same period, although about 2,000 arrived in the past week (See chart below).

IOM’s Flavio Di Giacomo added 490 migrants were rescued over the weekend: 416 of them were travelling on a single wooden boat and were brought to Catania by the NGO ship Aquarius (SOS Mediterranée) on Monday. Among them were 409 Eritreans. Nearly half the migrants on board were women. IOM Spain’s Ana Dodevska reported Monday total sea arrivals reached 19,421 through 27 November. Over the weekend, IOM learned of at least eight deaths on the Western Mediterranean route linking North Africa to Spain where remains of two victims were discovered near Tarifa and Barbate, in Cádiz (Spain) on 25 November while the Spanish NGO Caminando Fronteras reported that six bodies had been recovered from Morocco’s shores over the weekend.

IOM Athens’ Kelly Namia reported Monday (27 November) news of at least five incidents off the islands of Lesvos, Rhodes and Chios Island that required search and rescue operations. The Hellenic Coast Guard managed to rescue the 266 migrants and transferred them to the respective islands. On Saturday, IOM learned of the death of a 10-year-old Afghan boy found on a boat off the Greek island of Lesvos, during a rescue of some 66 migrants by a Frontex vessel that same day.

Some 15,492 men, women and children have entered Greece by sea from waters of the Eastern Mediterranean since 1 August, or more migrants (11,405) than entered during all of 2017’s first seven months. Namia further reported that 720 migrants or refugees entered Greece by sea during the dates 19-25 November, at about the same 100-per-day rate Greece has witnessed since mid-summer. Through 25 November, the total number of sea arrivals to Greek territory is 26,897 (See chart below).

Worldwide, IOM’s Missing Migrants Project has recorded the deaths of 5,124 people migrating in 2017, including at least 31 migrants who died – an unknown number still are missing – after their boat capsized off the coast of Garabulli, Libya, on Saturday (25 November). In the Western Mediterranean, the bodies of eight migrants were recovered. In the Eastern Mediterranean, a 10-year-old Afghan boy died of suffocation on board a boat carrying at least 66 people aiming to reach the Greek island of Lesvos on Saturday (25 November). These deaths bring the total of fatalities in the Mediterranean in 2017 to 3,033. That compares with 4,757 at this time a year ago (See chart below).

In the Caribbean, three Haitian migrants died in a vehicle accident last Wednesday (22 November) in a motorway in the department of Monte Cristi, Dominican Republic, shortly after crossing the border from Haiti. On the US/Mexico border, reports emerged of the death of an 18-year-old from Ecuador, Manuel Yunga, who drowned when crossing the Río Bravo on 21 September in Laredo, Webb County (Texas).