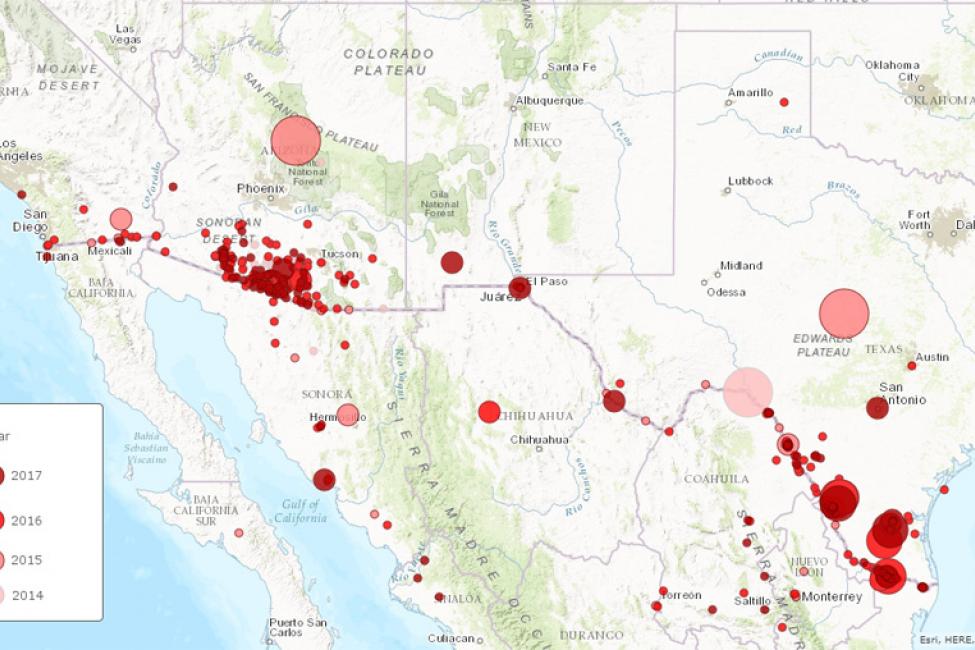 Berlin – A new briefing from the Berlin-based Missing Migrants Project (MMP) at IOM’s Global Migration Data Analysis Centre shows that migrants crossing the United States-Mexico border are dying at a faster rate in 2017 than in past years.

Reported MMP’s Julia Black this week: “Some 239 migrant fatalities have been recorded in the first seven months of 2017, an increase of 17 per cent compared with the 204 deaths recorded between January and July 2016.”

Black added: “Fifty bodies were recorded as discovered in July, the most recorded in any month so far this year,” explaining that these remains were located across the border region. “Nine were recorded in various locations along the Río Grande; ten in a truck in San Antonio, Texas; and 16 in other locations in Texas.”

Fifteen more were recovered in Arizona’s Pima County, a notoriously dangerous crossing, where seasonal temperatures regularly soar above 100 degrees Fahrenheit (38 degrees Celsius) between the months of May and September. So far in 2017, 96 bodies have been recovered in Pima County.

Said Black, “These numbers are especially concerning considering that, according to US Border Patrol figures, fewer migrants seem to be crossing into the US in 2017. The US Border Patrol has apprehended 140,024 migrants between January and June 2017, about half the number recorded in the first six months of 2016.”

The briefing reports that IOM’s Missing Migrants Project has recorded more than 1,250 migrant fatalities on the US-Mexico border since 2014.

MMP staffers note each one of these deaths are individual tragedies that serve as reminders of the many migrants who continue to risk their lives pursuing their “Sueño Americano” – or American Dream.

Though the story of the ten migrants who lost their lives trapped in the back of a tractor-trailer in Texas on Sunday was widely covered in English- and Spanish-language media, most of the deaths recorded in the border region occur in ones and twos. Those deaths, recorded almost daily during summer months, rarely make headlines.

The most recent incident recorded on the border region was the death of a five-year-old child migrant drowned in the Río Grande near Tamaulipas, Mexico, on Wednesday. Reports indicate that the child’s father also went missing during the river crossing.

Many of those pursuing el Sueño Americano travel from Mexico to Texas, meaning that they must cross the swift-flowing Río Grande to reach the US. The briefing reports that in 2017, 57 people have drowned in the border river, a 54 per cent increase over the 37 deaths recorded in the Río Grande between January and July 2016. IOM’s office in Mexico reports that is likely due to the heavy rainfall in recent months, which has made the river faster and deeper. However, the increase in migrant deaths in other areas on the border, such as the Arizona desert, remains unexplained.

Though migrant fatalities on the US-Mexico border represent 65 per cent of the total number recorded in the Americas, it is likely that many migrant deaths occur in Central and Southern America that go unrecorded. Notably, several bodies, presumed to be migrants, were seen floating off the coast of Nicaragua on Tuesday; another migrant was killed near Oaxaca, Mexico on Sunday after being struck by a train; another, from El Salvador, was the victim of a stabbing.

The briefing reports that the true number of migrant fatalities in 2017 is likely to be higher than the data from Missing Migrants Project indicate. “It’s something that is true for all regions of the world, unfortunately,” concluded Black.