‘One Migrant – One Tree’: Over 100 Migrants Plant Trees on Niger’s Independence Day 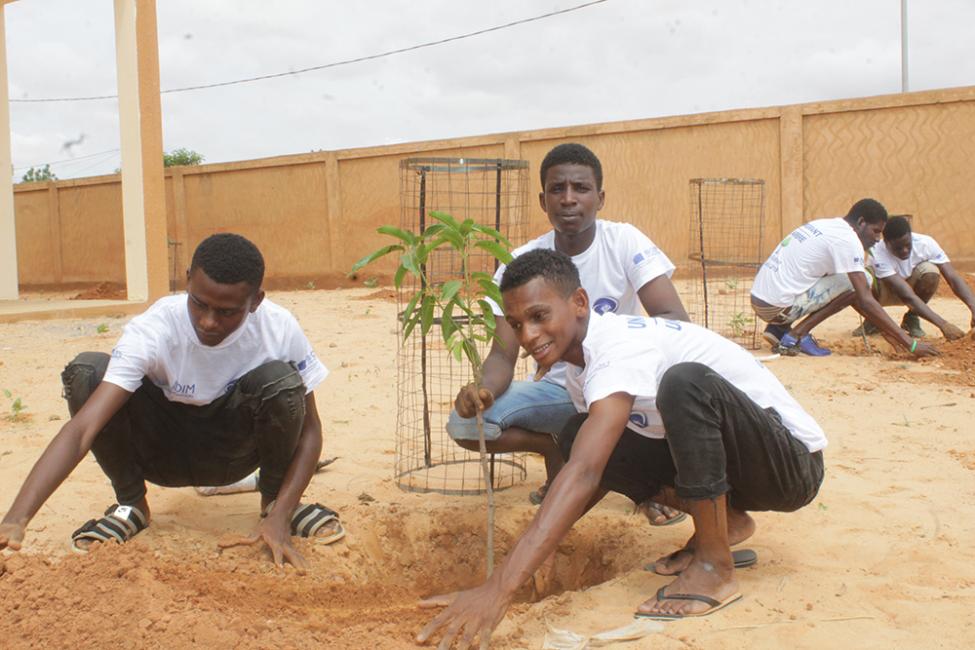 Niamey – Niger’s economy is largely dependent on subsistence agriculture, making it vulnerable to adverse climatic conditions. It is estimated that more than 100,000 hectares of arable land are lost each year in Niger due to desertification. Periodic droughts and floods – as well as land degradation caused by overgrazing – aggravate existing vulnerabilities and put Niger’s population at risk.

Since 1975, Niger has celebrated National Arbor Day on 3 August – which also is the country’s Independence Day – by encouraging citizens to plant trees and organize environmental events. Both are essential to combating desertification across the country.

To mark the day, the International Organization for Migration (IOM) supported the initiative “One Migrant – One Tree” which saw more than 100 migrants from IOM’s transit centres in Niamey, as well as members of disadvantaged neighbourhoods, plant trees this past Saturday.

“Often people look at us as being a nuisance or a burden,” says Ousmane, 19, a migrant from the Central African Republic, who is staying at IOM’s transit centre in Niamey. “It’s good that we have the opportunity today to show that we can also help, that we can make a difference. These trees are proof; they will be the legacy we leave behind in Niger.”

The initiative “One Migrant – One Tree” supported by the European Union, within the framework of the Migrant Resource and Response Mechanism, is part of Project All Migrants, managed by JEMED, Jeunesse en Mission Entraide et Développement (Youth in Mission for Mutual Aid and Development) since 2014.

JEMED is a Christian non-governmental organization that supports the Niger government's efforts in its fight against food insecurity and environmental degradation due to climate change. As part of the organization’s activities, JEMED assists migrants in transit who reside in poor neighbourhoods in Niamey. The organization provides food, non-food items and medical assistance when needed, but also organizes outreach activities and, upon request, refers migrants to relevant organizations or one of IOM’s transit centres in Niamey.

To mark the 44th anniversary of National Arbor Day in Niger, 70 migrants staying in disadvantaged neighbourhoods were mobilized, along with 30 migrants from IOM’s transit centres in Niamey. As recommended by the authorities, the species chosen were mango trees or other species which provide shade. They were planted in the courtyard of school No. 5 in Niamey’s Koubia neighbourhood.

“It’s important to include migrants in such initiatives and make them feel valued in their host communities,” said minister Paul Abdoulaye Zagre, founder of Project All Migrants. “On one hand, we are working towards saving the environment; on the other, we are creating a fraternal bond between migrants and community members.  At the end of the day, we are more similar than we care to admit.”
This newly created green space will provide a better living environment for the school’s students, while also enabling them to grow an eco-conscious mentality. The students, along with the teachers, were sensitized during the day on environmental issues and climate change, but also on how to take care of the newly planted trees.

“This is a great opportunity for migrants and community members to come together and work towards the same goal,” said Barbara Rijks, IOM’s Chief of Mission in Niger. “We are happy to work with JEMED on this day of learning and awareness-raising about important issues such as the environment, while we create strong bonds between different members of the community.”
During the one-day activity, the migrants had the chance to discuss their migration journeys and hopes for the future. “This is a wonderful initiative. Not only will the planting of these trees make a big difference for children going to our school, it is also an opportunity for us to meet people from all over the continent,” added Adamou, 36, who lives in the neighbourhood. “This is a good reminder that in the end, we are all brothers.”
To address the economic issues related to land degradation, IOM also implements a community stabilization project in Agadez, funded by the United Nations Convention to Combat Desertification (UNCCD), which aims to integrate migrants in host communities and facilitate the restoration of degraded lands.

Through the same project and with support from UK’s Department of International Development (DFID), IOM also provides one-week training sessions in agricultural techniques for migrants staying at IOM’s transit centre in Agadez, as they wait for their departure through the Assisted Voluntary Return and Reintegration (AVRR) programme, under the EU-IOM Joint Initiative for Migrant Protection and Reintegration.