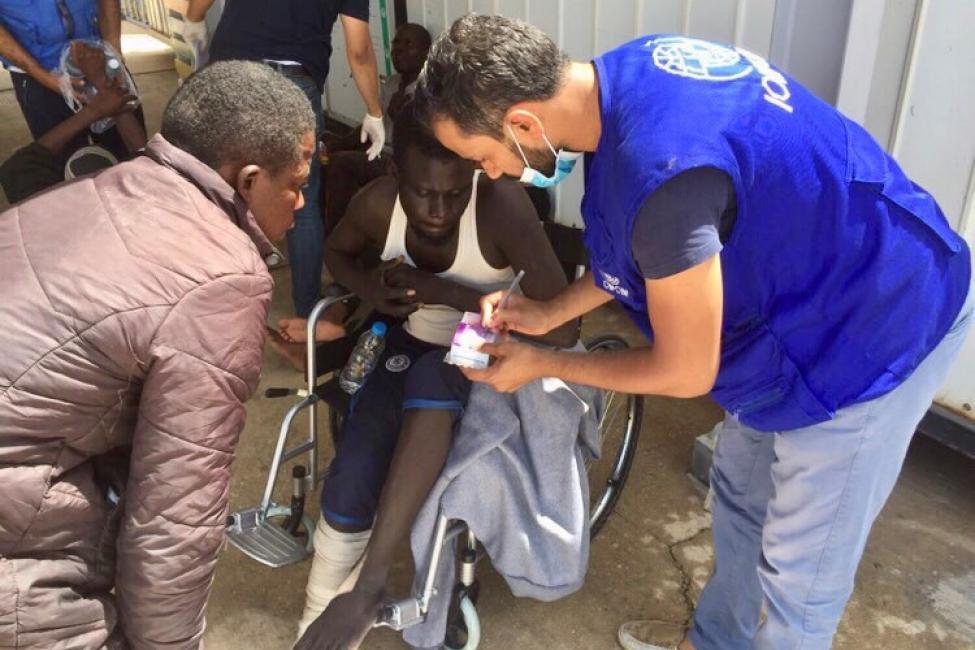 Rescued migrants being tended to by IOM staff in Tripoli. Photo: IOM

Geneva – On Sunday (1/07), a small rubber boat packed with migrants capsized off AlKhums, east of Tripoli, with an estimated 41 people surviving after rescue. Some 100 people were reported missing by the Libyan Coast Guard.  On Friday (28/06), three babies were among the 103, who died in a shipwreck similar to Sunday’s incident, also caused by smugglers taking migrants to sea in completely unsafe vessels.

So far this year, the Libyan Coast Guard has returned some 10,000 people to shore from small vessels.

“I am traveling to Tripoli once again this week and will see firsthand the conditions of migrants who have been rescued as well as those returned to shore by the Libya Coast Guard,” said William Lacy Swing, IOM Director General. “IOM is determined to ensure that the human rights of all migrants are respected as together we all make efforts to stop the people smuggling trade, which is so exploitative of migrants,” said Swing.

IOM staff were deployed to provide support and first aid to the the 41 migrants who survived the capsize of their small rubber vessel that capsized off AlKhums. This is the second major shipwreck in as many few days. On Friday, a rubber dinghy capsized north of Tripoli and the 16 survivors (young men from the Gambia, Sudan, Yemen, Niger and Guinea) were rescued by the Libyan Cost Guard. However, an estimated 103 people lost their lives.

Adding to grim and tragic scene, the bodies of three babies were taken from the sea by the Libyan Coast Guard. IOM provided assistance at the disembarkation point, including provision of food and water and health assistance. IOM is also in the process of providing psychosocial aid at Tajoura detention centre where the survivors have been transferred. The need for physcosocial support is high as the survivors spent traumatizing time in the water as their engine broke only 30 minutes after departing Garaboli. The survivors have received psychosocial first aid at the detention centre and IOM continues to monitor their condition.

From Friday to Sunday, close to 1,000 migrants were returned to Libyan shore by the Libyan Coast Guard, who intercepted small crafts as they made their way towards the open sea. Upon disembarkation to shore, migrants have received emergency direct assistance, including food and water, health assistance and IOM protection staff has provided vulnerability interviews. Those rescued and returned by the Libyan Coast Guard are transferred by the Libyan authorities to the detention centres where IOM continues humanitarian assistance.

“There is an alarming increase in deaths at sea off Libya Coast,” said IOM Libya Chief of Mission Othman Belbeisi, adding: “Smugglers are exploiting the desperation of migrants to leave before there are further crackdowns on Mediterranean crossings by Europe.”

“Migrants returned by the coast guard should not automatically be transferred to detention and we are deeply concerned that the detention centres will yet again be overcrowded and that living conditions will deteriorate with the recent influx of migrants,” added Belbeisi.

Two other search and rescue operations by the Libyan Coast Guard are currently ongoing.