Over 3,000 People Die during Migration Journeys in 2020 Despite COVID-19 Pandemic 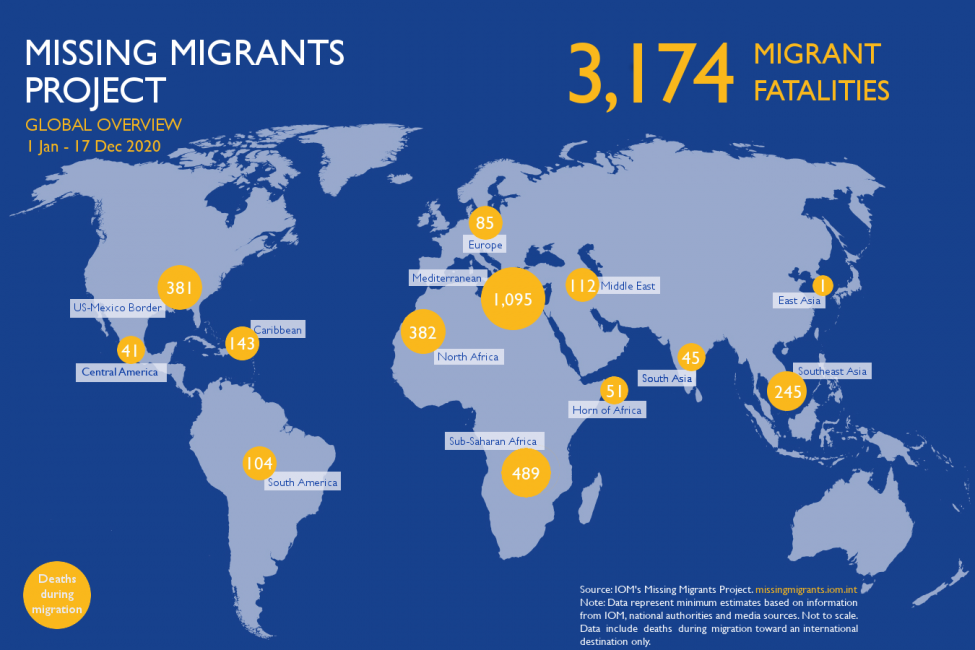 Berlin – The International Organization for Migration (IOM)’s Missing Migrants Project has recorded over 3,000 deaths on migratory routes worldwide so far in 2020.

Despite COVID-19 and the extensive travel restrictions and measures implemented on borders across the world in an attempt to control the spread of the virus, tens of thousands of people continued to leave their homes and embark on dangerous journeys across deserts and seas.

Though the overall number of people known to have lost their lives in 2020 is fewer than previous years, some routes saw an increase in fatalities. Most notably, at least 593 people died en route to Spain’s Canary Islands thus far in 2020, compared to 210 recorded in 2019 and 45 in 2018.

An increase in migrant deaths was also recorded in South America in 2020 compared to previous years, with at least 104 people who lost their lives – most of them Venezuelan migrants – compared to fewer than 40 in all previous years.

At least 1,773 people died within and en route to Europe this year, making up the majority of fatalities recorded worldwide; a trend that has continued since 2014, when IOM’s Missing Migrants Project began collecting this data.

Some 381 men, women and children lost their lives on the United States-Mexico border, 245 others perished in Southeast Asia – most of whom were Rohingya refugees travelling by boat from Myanmar and Bangladesh towards Malaysia, Thailand and Indonesia  – while another 143 and 112 people died in the Caribbean and Middle East respectively.

“Behind every one of these figures is a life lost needlessly, and a family who must mourn the person lost.”

The decrease in recorded migrant deaths is not necessarily an indication that the number of lives lost truly decreased in 2020, as COVID-19 also meant significant changes to the availability of data on deaths during migration and the ability to monitor specific routes.

Even before the pandemic, migrant deaths tend to be underreported or sometimes unrecorded. During COVID-19, many of the constraints to collecting such data have increased. Reports collected from surveys of migrants who may have witnessed a death, for example, were largely unavailable in 2020. Such survey data is often the only source of information on migrant deaths in remote regions such as the Sahara Desert.

These data challenges are exemplified by the number of unconfirmed invisible shipwrecks – vessels which vanished with no survivors – recorded on maritime migration routes to Europe in 2020. According to IOM’s internal records, at least 14 such cases, totalling around 600 additional lives lost, are not included in the Missing Migrants Project’s records due to a lack of corroborating information needed to record a death according to the project’s methodology. Reports of invisible shipwrecks largely come from distress calls and reports of missing family members relayed to NGOs who meticulously document such cases.

Although there are still a few weeks left of December, and data on migrant deaths in 2020 will likely continue to be collated until early 2021, the trends and data challenges already seen indicate that even the strictest travel restrictions do not stop irregular migration, nor do they prevent the senseless loss of life on these dangerous rotes. The continuation of these deaths across the world shows the urgent need for safe, legal migration avenues.

Hossin Ochlih was just 21 when he lost his life en route to Spain’s Canary Islands on 24 November. He was the youngest of five siblings, the one who his older brother say was the most joking and loving, and the one who always got in trouble for helping his poorer neighbors. He spoke Spanish – his paternal grandparents were from Spain – and he often shared a coffee and cigarette with the owner of the Madrid bar in the Sidi Ifni neighborhood where he grew up.

Like many others, Hossin left home without telling his family. His mother still hopes that there has been a mistake and that Hossin survived the shipwreck. His family has not yet been able to repatriate his remains from the Canary Islands, as they are unable to pay the 4,500 Euro that this costs.

Read more about Hossin and about the lives of others who lost their lives in the shipwreck on 24 November here.

For the latest data on migrant deaths and disappearances, visit IOM’s Missing Migrants Project website here. Raw data can be downloaded from missingmigrants.iom.int/downloads.