Over 40 Migrants Die of Thirst in Sahara Desert as Mediterranean Arrivals Top 71,000, Deaths 1,650 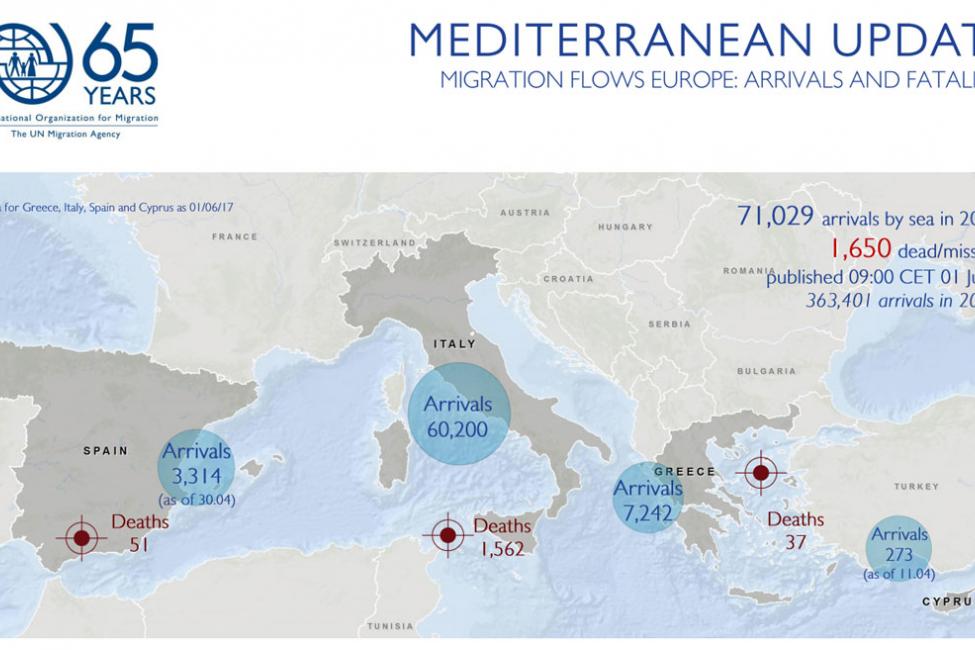 Switzerland - IOM, the UN Migration Agency, reports that 71,029 migrants and refugees entered Europe by sea in 2017 through 31 May, with over 80 per cent arriving in Italy and the remainder arriving in Greece, Cyprus and Spain. This compares with 205,858 arrivals and 2,512 deaths across the region through 31 May 2016.

Since the last UN Migration Agency (IOM) Mediterranean update (30 May), 1,271 rescued migrants have been brought to Italy.

Meanwhile, reports indicate that up to 40 migrants died of thirst in northern Niger when their vehicle broke down during an attempt to reach Europe via Libya, earlier this week.

Nigerien officials said babies and women were among the 44 migrants found dead. Details about the tragic incident were provided by six survivors who walked to a remote village where they said those they were travelling with, mostly from Ghana and Nigeria died of thirst. The deaths were later confirmed by the mayor of Agadez, a remote town on the edge of the Sahara.

Guiseppe Loprete, IOM Chief of Mission in Niger said this latest tragedy was a grim reminder that probably more migrants die in the Sahara desert than in the Mediterranean, but due to the inhospitable nature of the region, it was virtually impossible to know the exact number.

The six survivors, a woman from Nigeria and five men from Ghana were taken to the IOM transit centre in Dirkou. Local authorities are still looking for other survivors and IOM staff are currently working to identify bodies and bury the deceased.

Said Loprete, “The survivors will later be transported to IOM's transit centre in Agadez where they will receive medical, psychological and protection assistance. Once they are ready, we will help them with assisted voluntary return to their countries of origin.”

Loprete added, "The migrants are often lied to and cheated on their way to Europe. Smugglers usually run away with their money and they find themselves in the middle of nowhere, in a country they don’t know, trying to gain enough money to either continue the route or go back home. While in the desert, they are often abandoned by the drivers so they remain stranded for days at a time under the desert sun with no food, water or shade."

He added that most West African migrants leave their countries of origin due to poor economic opportunities as they dream for a better future in Europe. “Tragically many never get the chance to live that dream,” said Loprete.

The Niger to Libya route is the one most sub-Saharan African migrants take when trying to reach Europe via the Mediterranean sea. Each week, thousands of migrants are crammed into pick-up trucks for the days-long ride, often with only enough room for a few litres of water attempting to cross the Sahara desert, one of most inhospitable and deadliest places on earth.

Meanwhile, IOM’s Missing Migrants Project (MMP) has recorded 2,300 migrant deaths worldwide (up to 31 May) this year (see chart below), with the Mediterranean region accounting for the largest proportion of deaths, about two thirds of the global total.