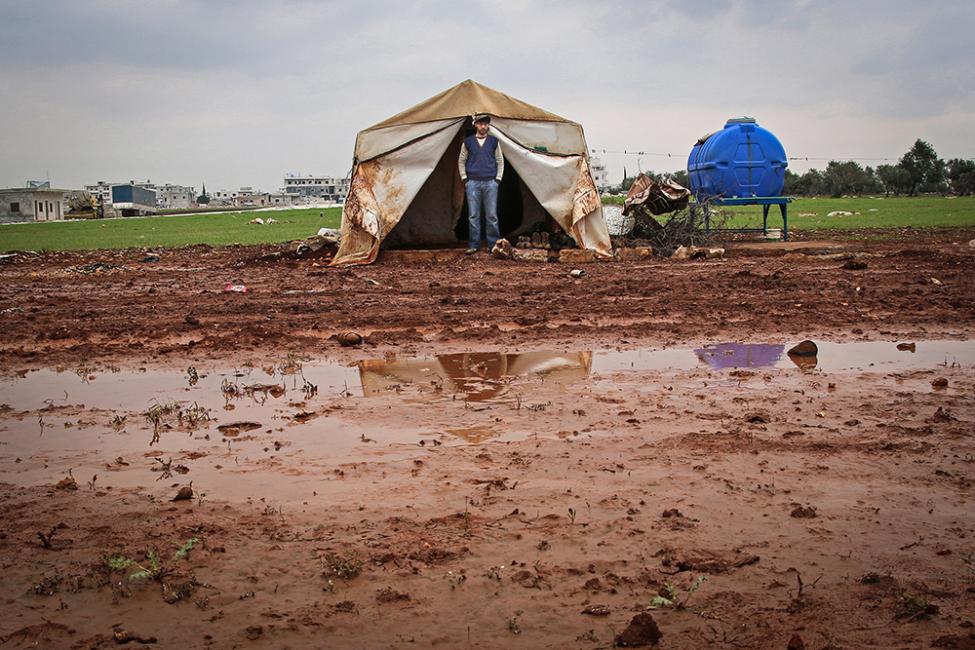 Geneva – Heavy rainfall in northwest Syria has caused severe flash flooding in northwest Syria affecting more than 80,000 people, according to data collected by the United Nations in mid-January. The flooding occurred in Idleb and Aleppo provinces where a high proportion of displaced people live in camps and displacement sites.

People in this part of Syria already are struggling to survive in an already volatile environment. The floods have swept away thousands of tents and caused concrete houses to collapse. Furthermore, one-quarter of the food stock in assessed locations was ruined in the flooding, causing many local shops and bakeries to close, increasing the price of the already limited food available.

The flooding also further damaged roads already heavily impaired by years of conflict. Already poor infrastructure conditions have been exacerbated. As a result, less than half of all school-aged children in flood-affected areas are able to get to their classes. Many schools which have remained open lack sufficient heaters or fuel to keep the classrooms warm.

After assessing across Idleb and Aleppo 112,777 shelters – comprised of tents as well as houses – IOM’s partner organizations found almost 7,000 (or about six per cent of the total) completely unlivable.

Over the past month, IOM’s partner organizations have responded to this destruction by providing 21,161 emergency support items and services in 18 internally displaced person sites. Partners have provided new replacement tents and insulated damaged tents. Groups have provided personal hygiene items and supplies to affected communities.

IOM also has provided tent insulation, replacement tents and ground insulation for over 3,500 affected households. Another 750 tents are pre-positioned in Syria for rapid response, while ground insulation is being prepared for an additional 4,200 tents in priority locations. There are another 2,000 family tents available in emergency stock, ready to be deployed.

The assessment showed a critical need for winterization support, something IOM partners have been providing. This winter IOM plans to serve a total of more than 320,000 beneficiaries across north-western Syria. These efforts include tent insulation and replacement, and distribution of winter clothing, blankets, and other items needed to alleviate the effects of harsh winter conditions.