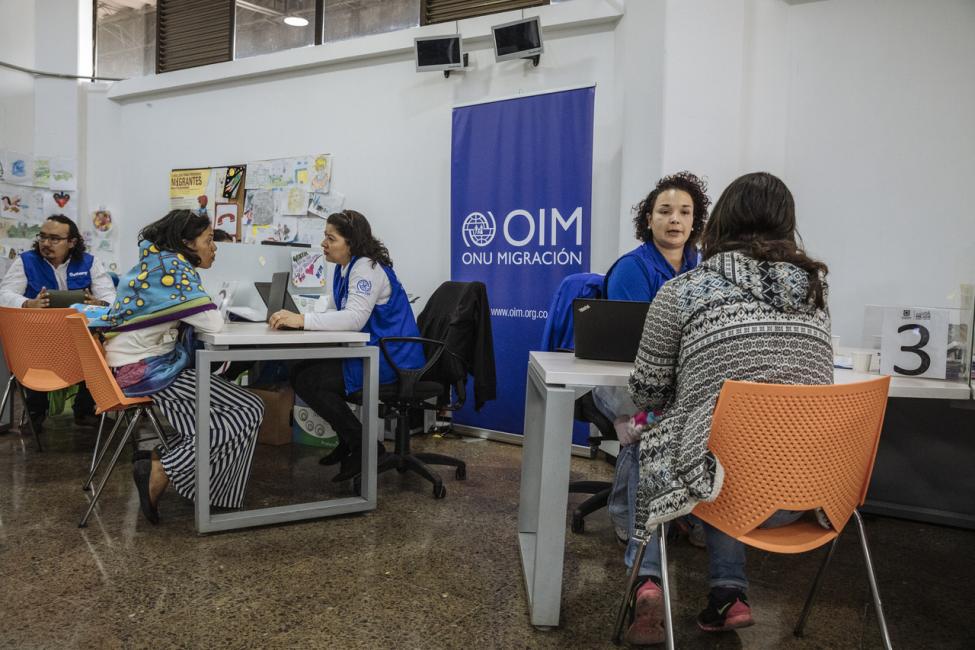 WASHINGTON — More than 4.3 million of the estimated 5.2 million Venezuelan refugees and migrants who have fled the ongoing complex socio-political and economic landscape in their country remain in Latin America or the Caribbean. While the movements have been widespread across the region, they are far from monolithic in their character.

A new analysis of Displacement Tracking Matrix (DTM) data of Venezuelan refugees and migrants by the Migration Policy Institute (MPI) and the International Organization for Migration (IOM) through the Office of the IOM Director General’s Special Envoy for the Regional Response to the Venezuela Situation, reveals differing socio-economic profiles, living conditions and future intentions regarding settlement in the host country or onward travel.

Drawing on DTM data based on government statistics compiled and analyzed by the Regional Coordination Platform (R4V) that it is co-led by IOM and the UN High Commissioner for Refugees (UNHCR), the MPI-IOM fact sheet offers a profile of Venezuelan refugees and migrants present in 11 Latin American and Caribbean countries during 2019, examining their demographics, education levels, employment before and after migration, remittance sending, health conditions and mobility patterns, among other characteristics.

“Since March 2020, with the onset of the COVID-19 pandemic, the evictions, the loss of employment, the inability to access health and education and the practical impossibility in most cases of complying with the rules of social distancing and isolation have generated significant setbacks in the possibility of integrating into the receiving countries,” said Eduardo Stein, Joint UNHCR-IOM Special Representative for Venezuelan refugees and migrants.

Venezuelans who headed to Venezuela’s immediate neighbors—Brazil, Colombia, Guyana and Trinidad and Tobago—tend to have lower educational attainment than Venezuelans who move to other countries farther away, are more likely to be younger and single, and report more restricted access to health services and mental health supports. The majority expressed their intention to remain in those countries.

Those who traveled to nearby but not adjacent countries—Ecuador and Peru—also tend to be young, but more than one-third hold a technical degree or higher.

The final group, moving to destinations further away—Argentina, Chile, Costa Rica, Paraguay and Uruguay—is older on average and reported particularly high levels of educational attainment, with half or more having a bachelor’s or master’s degree.

Diego Beltrand, Special Envoy of the IOM Director General for the Regional Response to the Venezuelan Situation, said:  “As part of the response to the Venezuelan refugee and migrant emergency situation, since 2017 IOM has collected cross-sectoral data on this population that has been key to ensure that stakeholders at national and regional levels can make evidence-based decisions and that has been also useful as a input for the Regional Refugee and Migrants Plan.”

Across all 11 countries, respondents reported holding a variety of statuses, reflecting differences in their profiles as well as the diverse and largely welcoming policies that countries in the region have designed to address one of the world’s largest migration flows. Notable shares of Venezuelans in Argentina, Brazil, Paraguay and Uruguay described having attained residency, asylum seeker or refugee status, while Ecuador appears to have the largest proportion of irregular migrants of the sampled countries.

Given that receiving countries now face the challenge of addressing the needs of Venezuelan refugees and migrants as well as host communities while also managing the COVID-19 public health crisis, there is a pressing need for timely and accurate data on this population’s characteristics and vulnerabilities. IOM’s DTM collects cross-sectoral data to help fill the gap for policymakers, UN agencies and other stakeholders.

“We need good data to guide decisions by the governments, civil society organizations and the international community so that we can turn a mixed-flow crisis, especially in the midst of the COVID-19 pandemic, into a long-term opportunity for the region by taking advantage of the talent and skills of the Venezuelan refugees and migrants who have moved to other countries in the hemisphere,” said MPI President Andrew Selee.

Among other findings from the analysis of DTM data:

The median duration of respondents’ travel to their destinations ranged from 2 ½ months for trips to Colombia, Guyana and Peru to 7 ½ months or more for journeys to Argentina, Chile, Costa Rica and Paraguay.

The challenges experienced during the trip that were most commonly reported across the 11 countries, in order of frequency, were lack of financial resources, food scarcity, lack of a sleeping place, insecurity, no transportation, issues with travel documents, lack of information and health concerns. In Guyana, 80 percent of respondents expressed concern about food insecurity, while 91 percent in Colombia experienced financial problems during travel.

Few respondents said they intend to return to Venezuela; in every country other than Colombia, 5 percent or fewer indicated an intention to return. While 17 percent in Colombia declared they intend to return, 58 percent said they planned to remain in Colombia and 24 percent expressed a desire for onward movement. For the 10 other countries, more than four-fifths said they planned to remain where they were.

Significant numbers report sending back remittances or other resources to dependents in Venezuela. Nearly three-quarters of respondents in Trinidad and Tobago, 56 percent in Ecuador and 53 percent in Paraguay did so. The proportions were smaller in Argentina (26 percent) and Costa Rica (21 percent).

Bryan Brennan at the Office of the IOM Director General’s Special Envoy for the Regional Response to the Venezuela Situation Email: bbrennan@iom.int