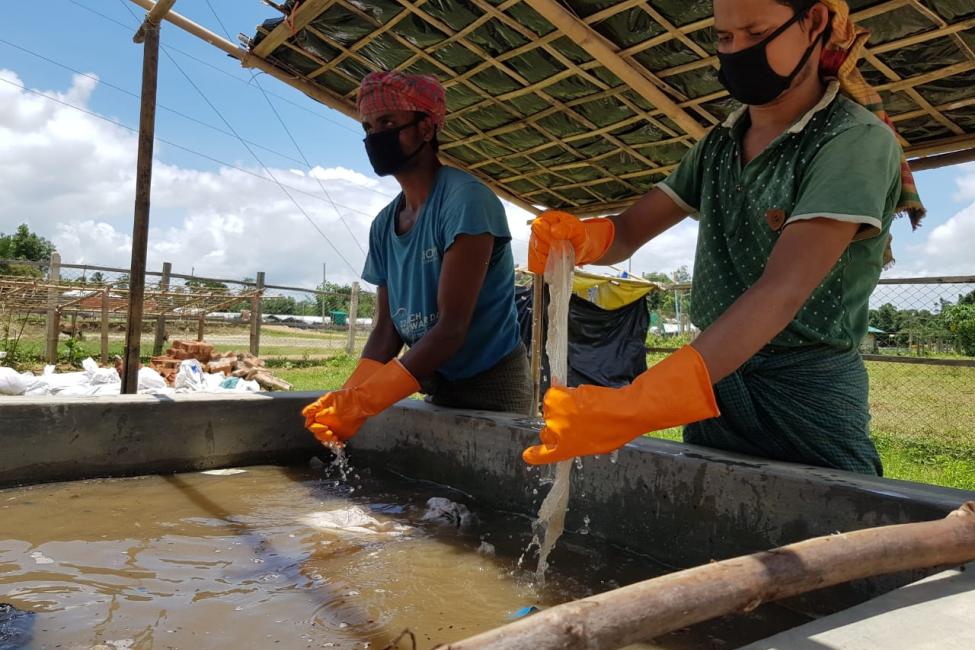 Cox's Bazar—The onset in 2017 of a refugee emergency from neighboring Myanmar carried with it  potential environmental chaos in Bangladesh—not just from the families who would be stripping firewood from virgin forest, but also from the rapid accumulation of mountains of plastic waste.

Today, with nearly a million refugees housed near the Myanmar border, the International Organization for Migration (IOM) is helping Bangladesh face both challenges. A new recycling plant turns discarded plastic bags, beverage bottles and other packaging into colorful building blocks for children.

Cox’s Bazar, situated on Bangladesh’s coastline, suffers from a problem afflicting many of the world’s oceans: plastic waste. The same bags, straws and cups that are tossed aside at cafes and parks are washed onto beaches everywhere. They also end up everywhere: from the bellies of turtles to the shores of isolated islands. With so many refugees housed nearby, the plastics scourge is even more serious here, as it chokes waterways and roads in and around the refugee camps.

To confront this challenge, an ingenious plan to convert waste into a useful learning tool was launched under an IOM-funded project. Every month, a plastic waste recycling plant collects thousands of pounds of discarded plastic in a modest facility located near the refugee camps. Staff from the local community clean and prepare the waste; separating out compostable matter. The plastic then is fed into a shredding machine that renders the plastic into flakes.

Those flakes then are melted under high-temperature--250 degrees Celsius—and converted into chips that go into a mold, out of which come cubical blocks bearing alphabet letters that help children learn to read.

“It is essentially taking something harmful and ugly and turning it into something constructive that builds a foundation for education,” explained Manuel Pereira, IOM’s Deputy Chief of Mission here. “IOM is proud to have created space for this innovative project; especially at a time when fighting plastic pollution is an absolute priority globally. It's fighting plastic waste and illiteracy.”

Six local staff now work at the plant full time. Teams of volunteers bring plastic waste to the facility for processing. The plant’s current capacity is about 100 pounds per day; a figure that is expected to grow. The project is the first humanitarian plastic treatment plant of its kind in Bangladesh.

“The source materials we use are things like bags and what would be considered low quality plastic,” says Kazi Rashed Hyder, programme manager of IOM’s implementing partner, Practical Action. “But this actually works in our favour because low quality plastic is easier to process and melts at a lower point.”

Practical Action says the facility operates like much larger commercial recyclers in Bangladesh’s capital, Dhaka. In the long term, the plan is to demonstrate that the model works and as a viable business.

As the operation scales up, it will move out of just learning materials and into plastic cartons for sale in the local markets. While addressing the obvious environmental impact of plastic, the plant has positive health side effects. Discarded plastic cups and bottles act as rain catchers in this tropical region noted for dengue fever and malaria. Mosquitoes breed in the plastic containers and spread disease to an already vulnerable population. “Unfortunately – there is no shortage of plastic to keep the plant running,” said Pereira.

Pereira explained the initiative comes alongside a project to provide LPG gas to refugees and the host community to reduce wood cutting, while reforesting the area with native species.

The distributions are a joint initiative between IOM, WFP, and the Food and Agricultural Organisation (FAO) in operation as the SAFE Plus programme, since 2018. SAFE Plus tackles deforestation while simultaneously restoring deforested areas.

“Thousands of Bangladeshis have benefitted from LPG and we continue to build on its successes. IOM is in Bangladesh for the long haul, and we look forward to reaching more host community members through this initiative,” said IOM’s Pereira.

Along with the distribution of LPG to stop trees being cut down for firewood, so far almost 80 hectares of land has been reforested around Cox’s Bazar. Indigenous species are being planted to help restore the damaged environment and help conserve the endangered species in the region.

Khaleda Begum received her stove and LPG on Thursday, nine months into her two-year livelihoods training. She says the LPG will be a welcome addition to her home, improving health and making cooking easier.

“I am feeling good about receiving this today because it will help me cook,” she said after the distribution.

“My husband currently spends a lot of time working so we can have firewood and when the kids come into our home they are affected by the smoke from the cooking.

More than 700 people received the stoves and LPGs last week. Distributions will continue throughout the month to reach the 14,000 people.