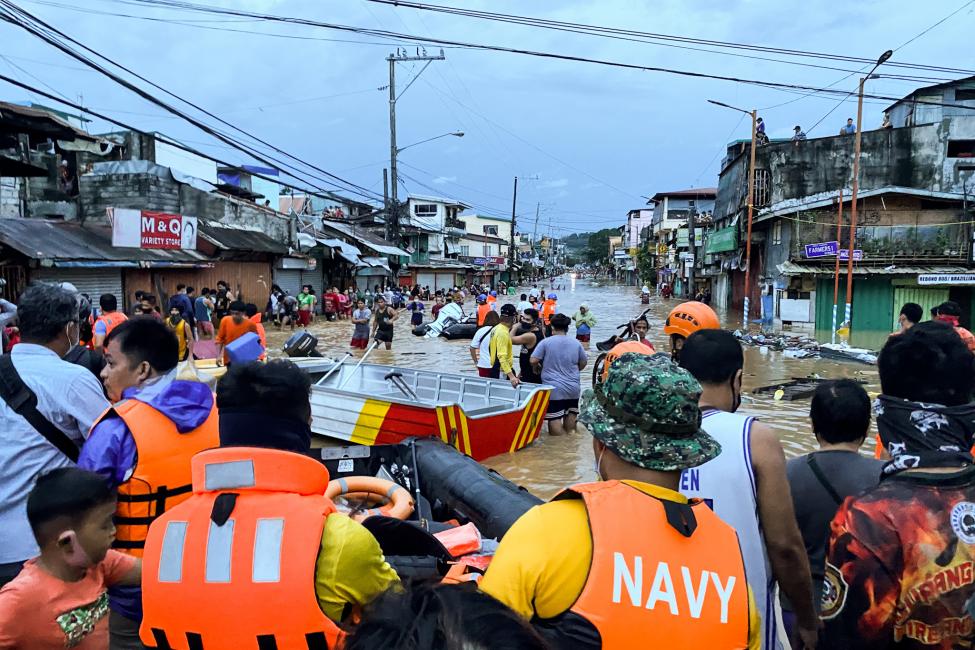 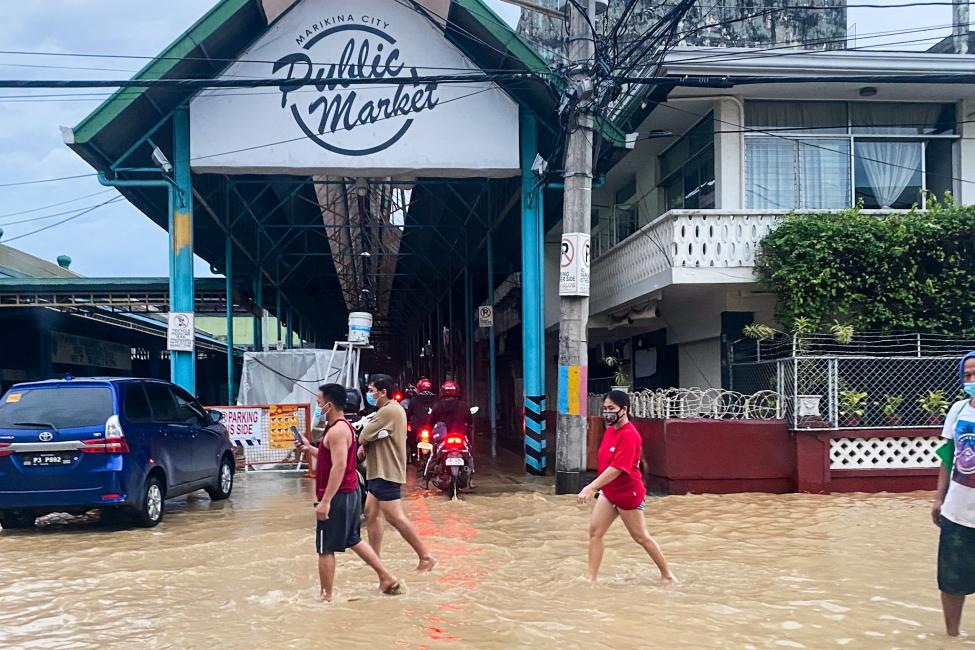 Many areas in Marikina City, Metro Manila, remain flooded with roads still impassable as Typhoon Vamco poured continuous heavy rain while it made its way through the capital. Photo: IOM 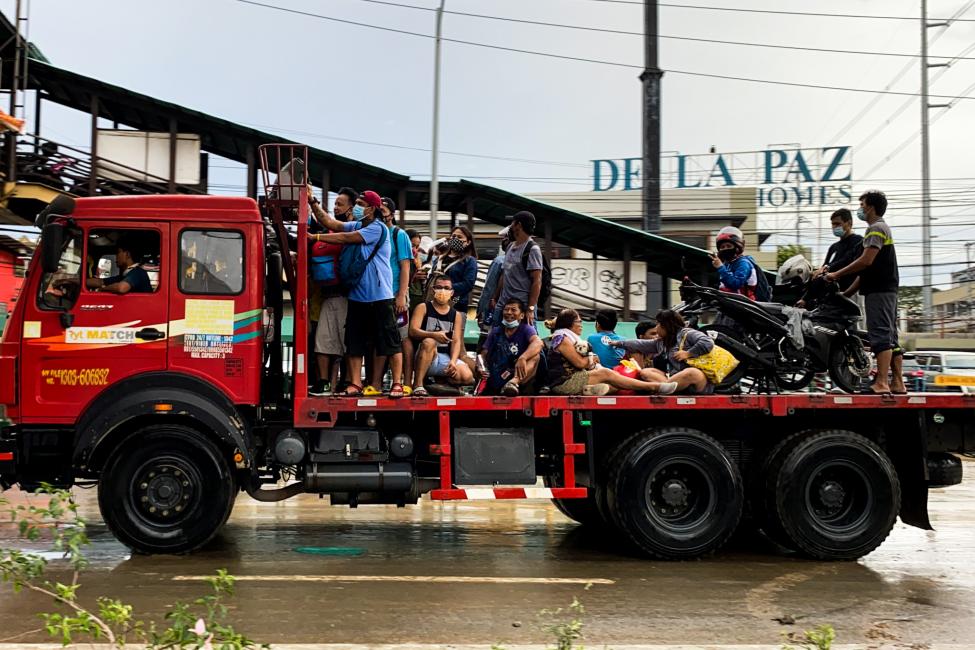 Stranded motorists wait out the floods as water levels in Marikina City were raised up to the 3rd and highest alarm, rising up to 22m and surpassing levels from Typhoon Ketsana (locally Ondoy) in 2009. Photo: IOM

Manila – An unprecedented five tropical storms have made landfall in the Philippines in a short period of three weeks, beginning 25 October with Typhoon Molave (local name: Quinta) and continuing this week with severe tropical storm Vamco (Ulysses). Moreover, Vamco is the 21st tropical cyclone to hit the Philippines this year, arriving just two weeks after Typhoon Goni (Rolly), which has been recorded as the strongest typhoon of 2020, so far.

After making landfall on Wednesday (11/11) night, Vamco caused extensive flooding in parts of Metro Manila, particularly Marikina City, where stranded and desperate motorists waited out the flooding as water levels rose to a stage three alarm (22m), surpassing levels from 2009’s Typhoon Ketsana (locally known as Ondoy). In some places, residents and pets had to be rescued from rooftops as flood waters rose.

Government rescue operations utilized boats and, in some cases, makeshift floating devices to reach affected communities stranded in homes with floodwater reaching up to the second stories of homes in some low-lying areas.

As of last night (12/11), many areas in Marikina City were flooded with many roads remaining still impassable. Vamco has caused continuous heavy rain as the storm made its way through the sprawling National Capital Region, which has a population of nearly 13 million.

According to preliminary data from the Department of Social Welfare and Development’s Disaster Response Operations Monitoring and Information Center, Vamco affected more than 5.6 million persons. Vamco has resulted in the deaths of at least 14 people across the affected regions, as of the morning of 13 November, according to the Department of Interior and Local Government.

Meanwhile, IOM’s response to the devastation wreaked by the previous tropical storms continue with IOM’s Displacement Tracking Matrix (DTM) rapid needs assessment continuing in affected areas in Catanduanes and Albay, despite many municipalities proving impassable due to landslides blocking access.

Currently, 950 emergency shelter-grade tarps and ropes from USAID Philippines are being distributed to affected families in Tiwi, Albay, beginning prior to landfall of Typhoon Vamco. These tarps will be used to provide quick shelter repair for families affected by the successive barrage of typhoons.

Another 750 tarps and ropes are bound to arrive in Camarines Sur and 1,600 in Catanduanes over the weekend.

IOM teams also reinforce government protocols on COVID-19 in the evacuation sites across Albay and Catanduanes, as they distribute personal protective equipment (PPE), modular tents and shelter-grade tarps from USAID Philippines and the Germany Embassy in Manila.

“We had the strongest typhoon last week since Haiyan in 2013 and now the biggest floods in Manila since Ondoy in 2009 – all in a very short period of time,” said Kristin Dadey, IOM Philippines Chief of Mission, after visiting some of the worst affected parts of Manila.

Dadey added, “The Philippines is one of the least contributors to the cause of climate change and yet is one of the most impacted by it.” According to the Climate Risk Index (CRI) 2020, the Philippines is ranked the second country most affected by weather-related loss events, with recurrent exposure to tropical cyclones causing the greatest losses.

Consisting of more than 7,000 islands and with a population of over 100 million, it is projected that, within the next three decades, areas in the Philippines currently home to at least 8.6 million people will be likely directly impacted and submerged by sea-level rise and inundation. According to Climate Central, these areas include parts of Manila, Malabon, Bulacan, Pasay City, Iloilo cities, Cotabato, and many more.

“Evidence in the Philippines suggests that recurrent climatic events like tropical storms are forcing people to migrate permanently from their residence,” said Dadey.

To raise climate awareness and action, IOM Philippines this past August launched the Climate Change Adaptation and Community Resilience in the Philippines Project (CARP), funded by the IOM Development Fund. Partnering with national and local government—including the Climate Change Commission (CCC), academic and research institutes—and the private sector, the programme aims to enhance understanding of climate change and its impacts on human mobility among general public, media and local governments.