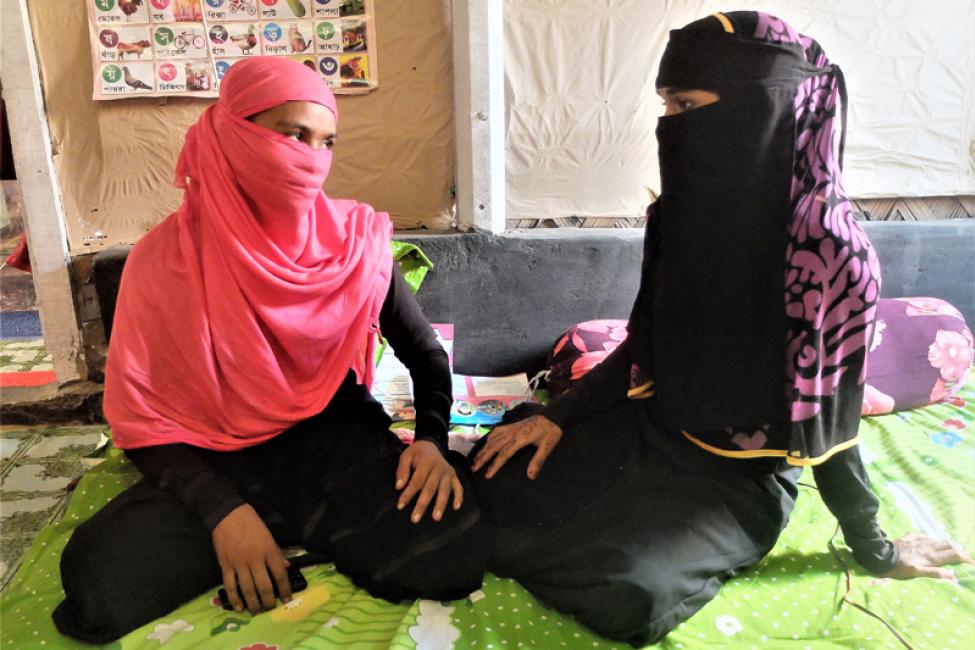 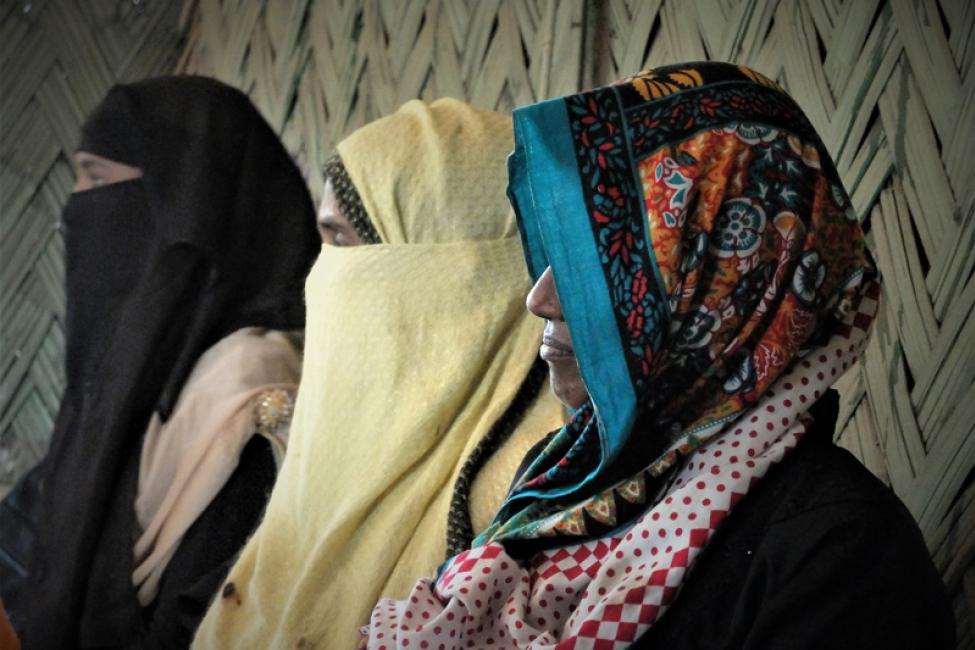 Cox's Bazar – “The reason we have the mirror is that after everything that has happened to them, many of the women cannot bear to look at themselves,” says Lufta Bokshi, a psychosocial support officer who is helping Rohingya women refugees in Bangladesh come to terms with life after fleeing deadly violence and rape in Myanmar.

“We encourage them to look in the mirror so they can see they are still beautiful and that life can still be beautiful too,” she says.

At this new women’s safe space created by IOM, the UN Migration Agency, for Rohingya women in one of Cox's Bazar's vast refugee camps, a lot of work has gone into making things beautiful with the most basic of materials.

Outside, a sunflower is already showing its face in the newly planted garden. Inside, colourful hand-made paper flowers adorn the walls.

Despite the clamour and the chaos outside – where life in the camp is noisy and hard and holds many dangers – inside the security of the high bamboo fence that protects this space, a feeling of calm and safety reigns.

Only women are allowed to enter. Even the guard, who sits in a little bamboo cabin at the entrance, is female. And for those who come here, that matters so much.

IOM has recently opened four such spaces, with another four more planned and set to become operational in coming weeks.

“The spaces play a vital role in ensuring women and adolescent girls have somewhere they feel safe to express themselves, access important information, develop social networks, and strengthen their  resilience to find positive ways to cope in the future,” said Megan Denise Smith, an IOM operations officer in Cox's Bazar specializing in cases of gender-based violence (GBV).

More than 688,000 Rohingya refugees have fled to Bangladesh from Myanmar since a major upsurge in violence in Myanmar's North Rakhine State in August 2017.

While women at the centre say they feel safer here than they did in Myanmar, the violence and loss that they and their families experienced in Myanmar are experiences that remain with them in Bangladesh. The space to discuss their worries past and present helps them to develop coping mechanisms.

“When we share our worries with our sisters here, we feel much better. I feel happy because we can learn things from each other,” says Asama*, a young mother who attends the centre.

“In Myanmar we weren’t used to this. We never got a chance to get together to gossip, because the [authorities] thought that when we got together in a group we were organizing something against them.”

When women in the camps mention “family problems” they may be referring to normal ups and downs in relationships. But Mostafizur Rahman, an IOM psychologist, explains that usually they mean that they are trying to cope with the loss of one or more relatives in the violence they fled.

Raysuana, a participant in a focus group about what kind of support women attending the centres need, scores her relationship with close family and other relatives as 2 out of a possible 5. She says she doesn’t have any immediate family left. They all died in Myanmar.

The opportunity to discuss feelings out loud in a secure and supportive environment is crucial, according to staff and the women who attend the spaces. In Rohingya traditional society, women are rarely afforded the opportunity to speak up publicly. Here, they say, they can talk “fruitfully”, free from the “dominance of men”.

“When I stay in my own house, I worry more. But in the safe space I can be with other people who are similar to me and we can share our emotions,” says Fatima, another focus group participant.

At the IOM safe spaces women receive individual and group counselling. There are also craft materials, board games and television, where they can watch films and other programmes to help them build up their confidence and resilience.

“I can’t sleep at night for thinking about all the different things we can do (to help) these women,” says Bokshi, whose local organization PULSE is an IOM partner at the safe spaces.

Women and girls in the camps need psychosocial support not just to deal with the violence and traumatic experiences of the past, but also the current difficulties that they now face. The everyday challenges of surviving in a place surrounded by hundreds of thousands of strangers; coping with a life lived under tarpaulins, reliant on food aid just to survive; and the increased risk of gender-based violence that comes with life in a refugee camp.

Women and adolescent girls who visit the safe spaces also learn about the dangers of human trafficking. This is a very real risk in the camps, where traffickers can lure vulnerable adults and children with promises of good jobs and a better life, but in reality deal in slavery, forced labour, sexual exploitation and other abuses.

There is no single solution to finding ways to offer support to women in the refugee camps. While stories of violence, rape and loss are all too common, each person’s experience and response is unique.

But the IOM safe spaces offer a place for women to come together and find their strengths as individuals and through shared experiences.

The mirror is not just used in psychosocial support sessions. “When the women come in here, they are able to take off their head scarves away from the view of men. They can use the mirror to apply face cream or put on some make up. Little things. But things that give them a chance to feel normal,” says Bokshi.

During the past week, IOM responded to 159 protection/gender-based violence (GBV) cases. Since the start of the current crisis in August 2017, IOM has identified 15,151 extremely vulnerable individuals. Some 447 GBV cases have been assisted through IOM’s case management. Another 4,153 individuals have received psychosocial first aid and 24 victims of trafficking have been identified and assisted.

(*Some names have been changed for protection reasons.)