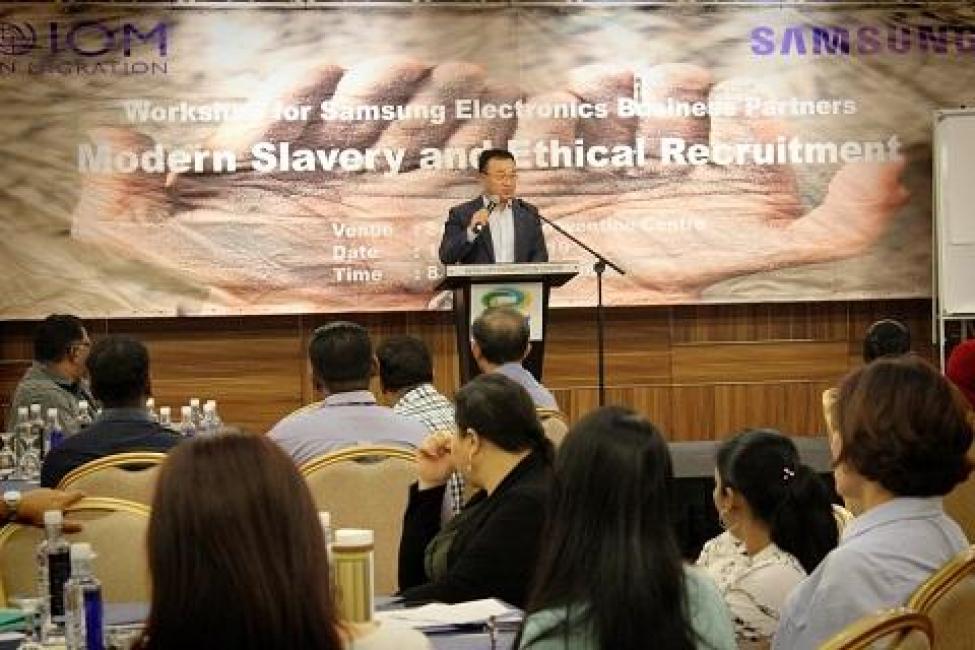 Samsung Electronics partnered with the International Organization for Migration (IOM) to provide training to its staff, local suppliers and other business partners in Malaysia.

The training was held at the Setia City Convention Center in Setia Alam, near Kuala Lumpur, gathering around 80 managers working with Samsung Electronics – including company staff, suppliers and sub-contractors. Its focus was to raise awareness within the company and among business partners on the protection of labour and human rights of migrant workers active in its supply chains.

Participants learned about key concepts and risks of modern slavery, as well as best practices to counter them. This included ethical recruitment, due diligence, as well as strategies to identify and tackle unethical employment practices. The discussions also took into account policies and regulations currently in force in Malaysia to prevent modern-day slavery.

These activities are aligned with Samsung’s Migrant Worker Guidelines policy, which reflect Samsung Electronics's commitment to prevent, identify and mitigate unethical recruitment practices. An important part of this commitment is to ensure that migrant workers are not charged recruitment fees.

According to the International Labour Organization (ILO), around 40 million people worldwide are victims of modern slavery, which by definition often includes forced labour, forced marriage, human trafficking, debt bondage and other slavery-like practices. Among them, 25 million people are in situations of forced labour, working across industries and geographies, and often hidden in plain sight. One-fourth are migrant workers, with the highest prevalence recorded in the Asia-Pacific region.

Despite their key role in today’s globalized economy, migrant workers remain a vulnerable group. However, the risks they face cannot be tackled by Governments alone. Achieving safe labour migration for the benefit of all requires the involvement of various actors across countries of origin, transit and destination. IOM and Samsung Electronics are collaborating to raise awareness and inspire action among public and private stakeholders in the region.