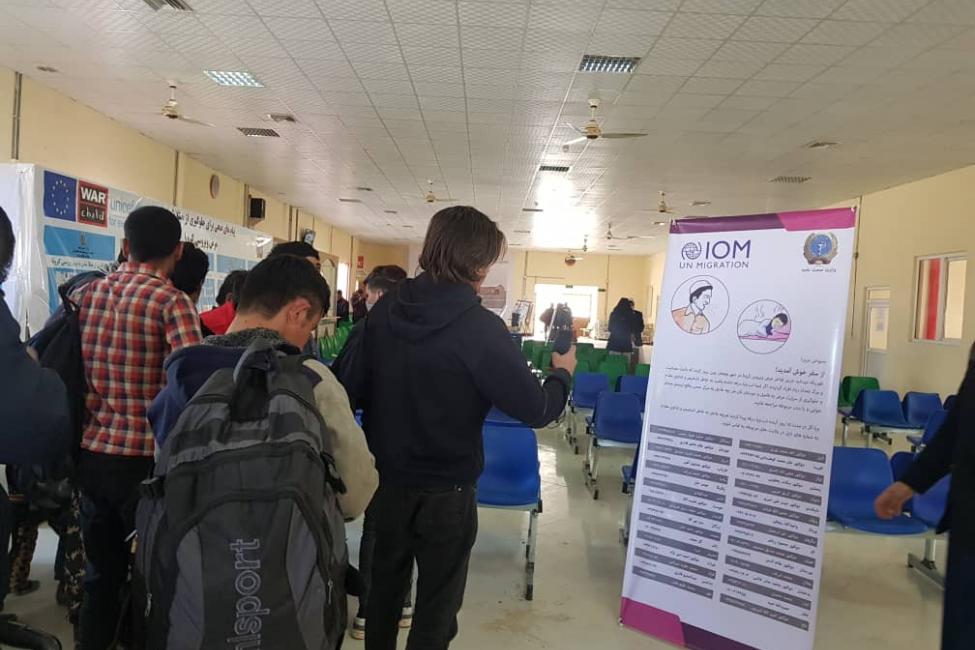 Public health and hygiene messages on display at the Reception Center on the Islam Qala border in western Afghanistan.  Photo: IOM/Aziz Ahmad Rahimi

Herat, Afghanistan – As the coronavirus disease (COVID-19) transmission rapidly spreads across the Islamic Republic of Iran—with 13,938 confirmed cases and 724 deaths as of 16 March—health concerns have descended on Iran’s resident Afghan population.

The International Organization for Migration (IOM) stands ready to assist.

Since January, and in line with World Health Organization (WHO) recommendations, IOM has been working with dozens of governments to help people on the move stay healthy. Last month, a USD 17 million preparedness and response plan was launched.

In line with the COVID-19 Global Strategic Preparedness and Response Plan, and as part of the UN’s response in Mongolia, IOM also is providing technical assistance to implement the Displacement Tracking Matrix (DTM) flow monitoring tool to track all incoming and outgoing vehicles at six major checkpoints in Mongolia’s capital. That initiative is scheduled to continue into next week (24 March).

IOM is helping Member States with their cross-border coordination and establishing surveillance efforts at entry points (airports, sea ports and land border crossings), and leveraging its community networks to enhance risk communication activities and help ensure that information on how to remain healthy is communicated to the most vulnerable, including migrants, regardless of their status.

At Afghanistan’s borders over the past week (8-14 March), more than 36,000 migrants returning via the Islam Qala border in the western Herat province- which a record for a single week. Daily returns now exceed 9,000 returnees.

Moreover, IOM has taken on a formal inter-agency coordination role on the border with Iran in Herat and installed hand washing stations in all of its transit facilities and is sensitizing returnees, IDPs and other migrant populations on hand hygiene and personal protective measures to prevent disease transmission. The Afghan government’s Ministry of Public Health in Herat has issued a request for 200 new staff to dedicate to the COVID-19 response including cross border surveillance actions.

IOM is actively supporting the Ministry of Public Health (MoPH) and the WHO in addressing COVID-19 preparedness and emergency coordination. Support includes secondment of staff to cross border surveillance, medical consumable material support including hand sanitizer and masks, publication of MOPH and WHO communication materials and billboards and most importantly community-level awareness raising through health education sessions and focus group-based data collection.

IOM’s Displacement Tracking Matrix is also preparing to carry out flow monitoring on the Afghan borders with Iran to collect data on the returning population which will inform broader government and humanitarian response actions.

At the direction of the Ministry of Health seven mobile health teams and a border level tuberculosis screening programme for Afghan migrants are scaling up for deployment in border areas to assist in surveillance and response actions. TB screeners will begin supporting COVID surveillance this week at the Iranian border.

To assist, IOM Afghanistan has 50 migration health staff in the four primary border provinces facing Pakistan and the Islamic Republic of Iran, personnel funded through contributions from the United Kingdom’s Department for International Development (DfID), the Central Emergency Response Fund (CERF) and the Global Fund for TB, Malaria and HIV/AIDs.

In Afghanistan itself, the confirmed case count remains low, with 22 cases as of 16 March. Nonetheless, the government has closed schools through the end of April and all flights to Iran are suspended with a number of international border closures ongoing.

The Afghan-Pakistan frontier was officially closed from today for two weeks. In Herat, bans on public gatherings have also come into effect in an attempt to combat the transmission.

Annually, over 500,000 undocumented Afghan migrants return from Pakistan and the Islamic Republic of Iran. Those countries host a combined number of up to 5 million Afghans between the refugee and undocumented populations. Mass returns associated with COVID-19 are sparking fears that the unfettered arrival of 10,000s of returns in a short space of time may increase transmission rates in Afghanistan.

In response, IOM’s Cross Border Response programme operates a network of 8 transit facilities on the borders where post-arrival humanitarian assistance is provided to tens of thousands of returning undocumented Afghans each year.

Over the last four years IOM has served over 300,000 undocumented migrants under funding from the US, UK, Japan, Italy, Switzerland, the Netherlands, Norway, and the European Union’s DG ECHO.