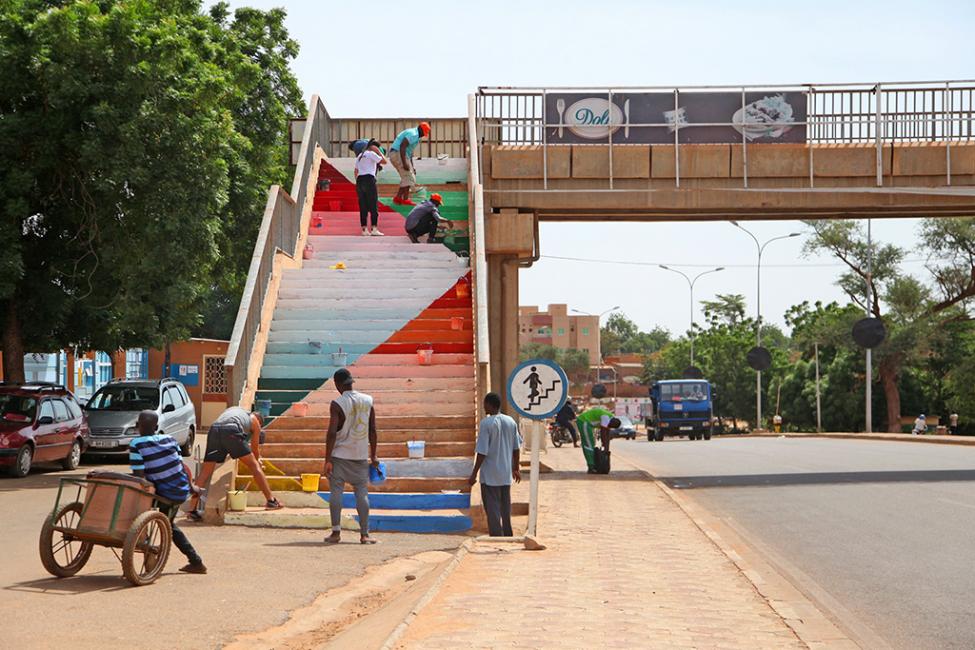 Niamey – This week, a month-long street art project in the Nigerien cities of Niamey and Agadez concluded under the direction of the International Organization for Migration (IOM) and its partner Street Art Sans Frontière. The event supported 15 participatory painting sessions, attended by more than 1,000 people.

“Through this workshop, the two cities have become more colorful and welcoming, improving the living environment of its residents,” said Barbara Rijks, IOM’s Chief of Mission in Niger. “We hope that the confidence the participants gained through these workshops will have an impact on other everyday actions. These may seem like small successes, but the personal satisfaction gained can further motivate them for life’s bigger challenges.”

This is one of several awareness-raising projects that IOM’s Regional Office for West and Central Africa in Dakar is implementing this year various with support from the European Union Emergency Trust Fund for Africa. These events aim to introduce a human-centered approach to increase the social cohesion between migrants in transit, returnees and community members.

IOM’s community mobilizers or “MobComs” facilitated the participatory street art activities and engaged with the public. Seeing as they have already become regular friendly faces among community members and migrants in transit, the MobComs have access to a wide range of neighbourhoods.

In both Niamey and Agadez, artists worked alongside the migrants staying at IOM’s transit centres to decorate their temporary homes.  Neighbours, local associations and schools also approached IOM during the project’s implementation, asking to be included.

“The project uses participatory public art as a way for migrants to give back to their host communities, while creating meaningful interactions in the process,” said Luca Putteman, IOM’s Regional Awareness Officer. “It’s also important for returned migrants to feel welcome and to be able to reintegrate properly in their communities.”

Involvement was voluntary, within the limits of space and available material. Many bystanders were intrigued by the sudden artistic activities popping up in different corners of Niamey, and decided to engage, be it for a couple of brushstrokes or advice on the choice of colors.

“Art can be a very powerful tool for stimulating open-mindedness and creativity, especially for young people,” said Antoine, one founder of Street Art Sans Frontière, the international art collective experienced in managing social projects across Western Africa. “Since street art is free and doesn’t take place in institutions, it is accessible to everyone.”

To guarantee the project’s sustainability, a selected number of local artists, including several returnees, were trained by the team of international artists. The goal is to equip them with the necessary skills and know-how to continue the project in different locations within the country and the region, long after the project finishes.

“I am very proud of what we accomplished today. Every time I will pass by this place, it will remind me of the good times we had here,” said 19-year-old Adama, a Niamey resident. “We realized today that we are all artists at heart and that, in fact, it doesn’t take much to create beautiful things.”

“It’s nice to see the effect one afternoon can have on people,” said Donald, 24, a migrant in transit from Cameroon. “This may not be my city, but it’s a great opportunity to make it beautiful for others and to create friendships along the way. It motivates me to want to do better and to share what I have learned with my friends back home.”

Watch the video in English | French