Thousands of Migrants Forced to Sleep Rough after Closure, Destruction of Bosnia Camp 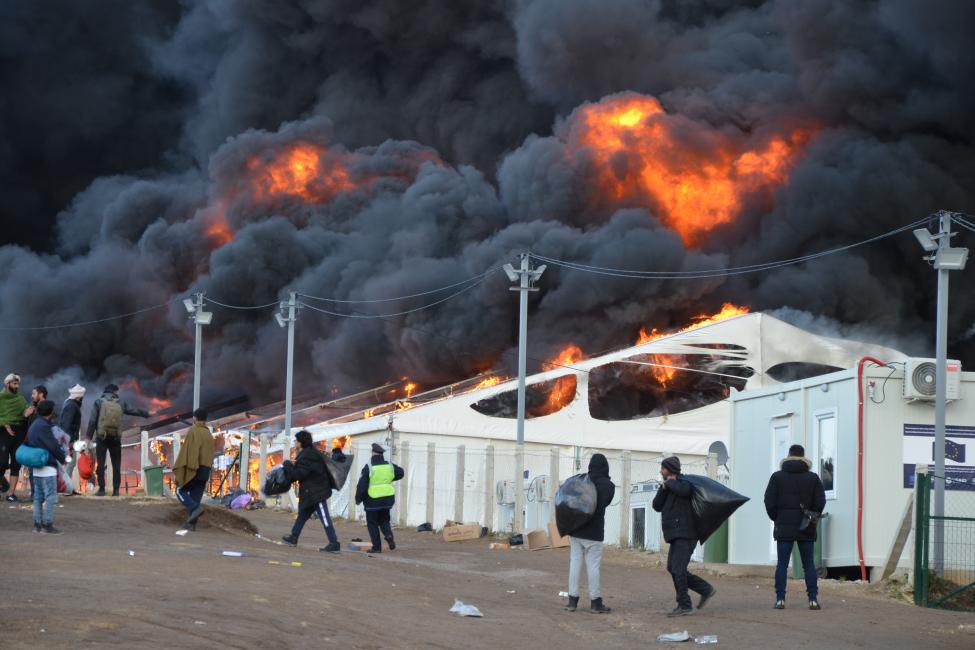 Lipa camp on fire earlier today. The camp had just been closed by local authorities forcing over 1,000 migrants onto the streets. Photo: Ervin Causevic@IOM2020

Bihac – The International Organization for Migration (IOM) is stepping up its assistance to the thousands of migrants who will be sleeping rough tonight in Bosnia, which has become a bottleneck as people try to reach the European Union. A humanitarian emergency was caused when the Lipa Emergency Tent Camp, run by the local authorities with support from IOM, was closed earlier today. Minutes after the closure, it was destroyed by fire.

“This camp was built earlier this year in response to over-crowding and unsuitable conditions elsewhere,” said IOM Chief of Mission in Bosnia and Herzegovina, speaking from the scene.

“For several reasons, mostly political, it never got connected to the main water or electricity supply, and was never winterized. And now, with this fire, it never will be.”

Days of negotiation on the camp’s future ended without a positive solution, meaning 1,400 people will join the growing number of migrants sleeping rough in Una Sana Canton, on Bosnia’s border with EU member Croatia.  IOM estimates an additional 1,500 migrants, asylum-seekers and refugees —including women and children—also are stranded in squats and forest camps nearby. The lack of immediate solution raises the overall number of people in dire need of humanitarian aid to almost 3,000.

As Lipa closed, the United Nations expressed its concern and pledged its support in efforts to find solutions. A statement called on the authorities to “immediately engage in the winterization of the Lipa Emergency Tent Camp and offer an alternative shelter option while the work is being conducted, to identify and make available new locations for people stranded outdoors with temperatures below freezing.”

IOM’s Van der Auweraert noted that, while migrants were still in the local area, some were planning to head to Sarajevo, while others would find places to sleep rough locally. “What concerns us is that many have said they will go to Sarajevo or Velika Kladuza, but we already know that there is zero additional capacity at any of the shelters for single males. This is likely to drive people to move closer to the border.”

Warm clothes, sleeping bags, food and hygiene kits have already been distributed to 1,500 rough sleepers by IOM, the Red Cross and the Danish Refugee Council. “We are going to step up the number of distribution teams and the quantity of items to try and cover this new caseload”, said Van der Auweraert. “This is a nightmare scenario: these people should be inside in warm conditions, just as the rest of Europe is doing at this holiday time.”