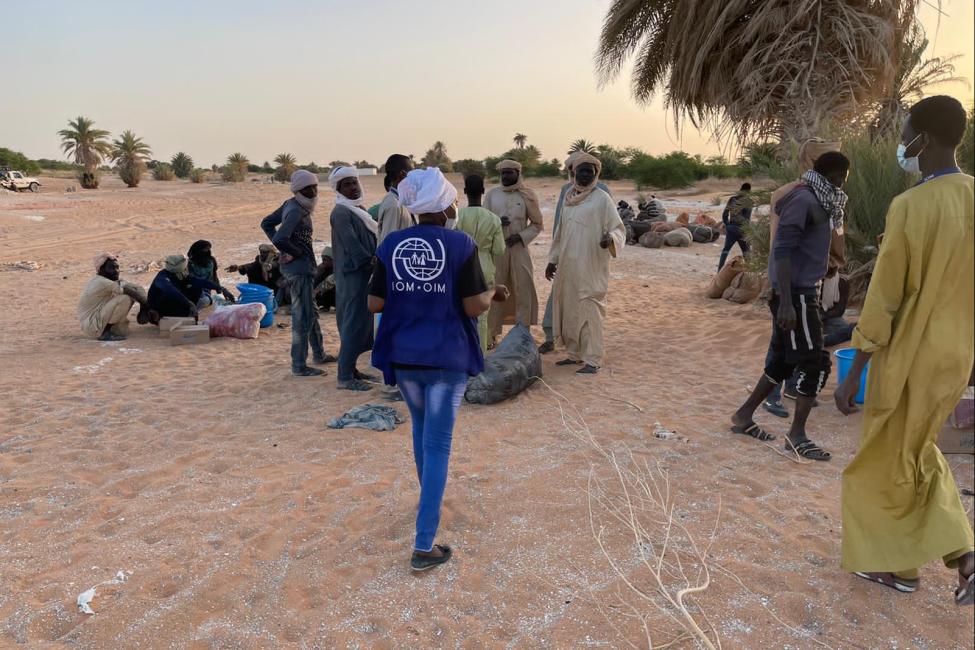 IOM staff provide food and non-food assistance to mine workers affected by the clashes in Northern Chad. Photo: IOM 2022

N’Djamena – Thousands of people are believed to be in urgent need of humanitarian assistance in Northern Chad following deadly clashes between gold miners in Tibesti province near the border with Libya last month.

“According to official government sources, nearly 10,000 Chadian and international mine workers have evacuated the Kouri Bougoudi gold mines following the clashes,” said Anne Kathrin Schaefer, Chief of Mission of the International Organization for Migration (IOM) in Chad. “The humanitarian situation there is currently fragile as the mine workers have limited access to food, water or any form of shelter.”

According to a first assessment conducted by IOM’s Displacement Tracking Matrix (DTM), more than 3,200 mine workers, including 172 children, are currently stranded in the towns of Zouarké, Wour, Zouar, Kollou, Faya and Puits 80 in northern Chad. Assessments are ongoing and this number is likely to increase.

The volatility of the situation exposes mine workers to the risk of physical abuse, human trafficking and smuggling.

IOM is the only UN organization operating in Northern Chad with a sub-office in Faya and a presence in Ounianga Kebir. Through its Rapid Response Fund and at the request of the Chadian authorities, the Organization has already provided 515 gold miners, who arrived around the town of Faya, with food and other humanitarian items.

Most of the mine workers identified are from the south and centre of Chad, Sudan and Central African Republic. They have told IOM there’s barely any food to eat and that they want to return to their communities and countries of origin because of their precarious situation.

Local authorities are worried the arrival of mine workers in their town risks putting massive strains on the limited resources at their disposal and might lead to conflicts between mine workers and residents.

“The global increase in prices has also led to shortages in fuel as well as basic food items, which makes it harder for communities to support newcomers. This could potentially aggravate the situation which is already fragile,” said Schaefer.

Since 2012, artisanal gold mining has experienced a boom in the Sahara-Sahel. In Chad, the Kouri Bougoudi district, located just 17 kilometres from the border with Libya and over 1,000 kilometres from the Chadian capital N’Djamena, is one of the main artisanal gold panning areas, which has attracted thousands of Chadians and international migrants hoping to cash in the potential riches to be made in the gold fields.

Although no official statistics exist on the number of miners working there, estimates from various sources report roughly 40,000 gold miners in the locality. Due to the unregulated, artisanal nature of mining in the region, tensions often arise between the diverse groups of people.

According to official sources, roughly 100 people died in violent clashes in one of the mining sites in Kouri Bougoudi between 23 May and 24 May. Following the incident, traditional and national authorities have ordered the closure and evacuation of all the gold mining sites in Kouri Bougoudi, evicting thousands of Chadian and international workers to neighbouring towns.

Roughly USD 6 million will be needed to provide humanitarian assistance and protection to the displaced mine workers. The assistance will include food and other basic humanitarian items, as well as onward transportation through IOM’s Voluntary Humanitarian Return programme for both Chadians and non-Chadians to their communities and countries of origin.

Since 2011, the Organization has implemented a range of community stabilization and peacebuilding initiatives in Chad aimed at supporting community development, fostering social cohesion, and promoting peaceful resolution of conflicts related to natural resources.

Read the latest dashboard on the situation in northern Chad here.

IOM’s Displacement Tracking Matrix (DTM) in Chad is supported by the COMPASS initiative.