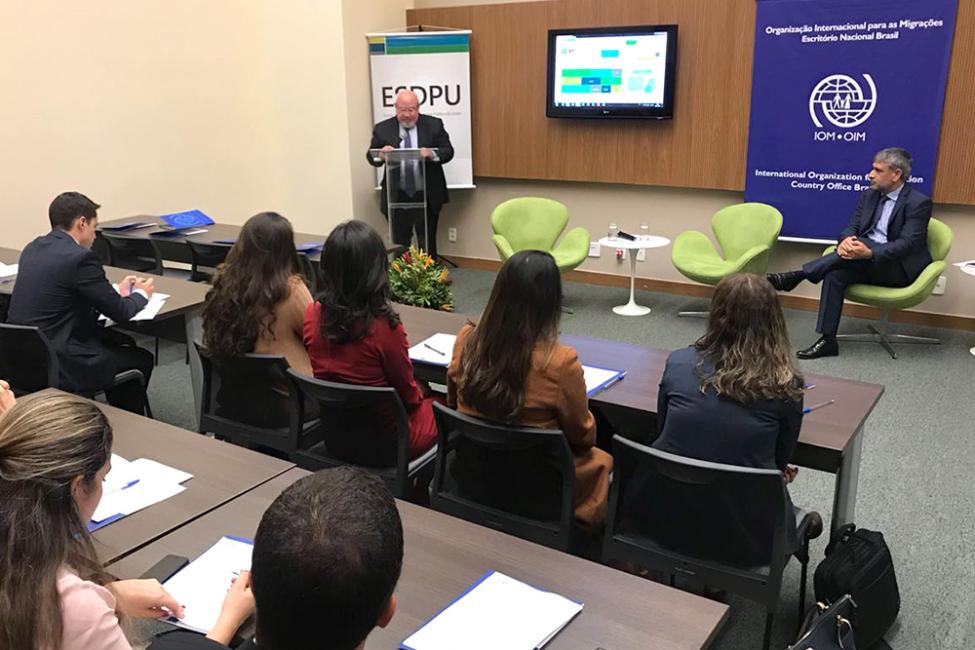 The training, which took place in Brasilia this week (6-8/06), addressed some of the most pressing issues on the Brazilian migration agenda, including the challenges of implementing the new migration law which entered into force in November 2017. It also addressed topics such as regional migration flows in South America, and the rights of vulnerable migrants such as LGBTI, homeless and indigenous individuals among others.

A module on counter-trafficking, supported by the European Union-sponsored Global Action Against Trafficking in Persons and the Smuggling of Migrants (GloACT) was also included in the training.

According to the 1988 Brazilian constitution, the DPU is responsible for providing legal assistance to vulnerable populations. In the last decade, the number of vulnerable migrants reaching Brazil and requesting assistance from DPU attorneys has significantly increased. In 2015, the DPU assisted 4,887 vulnerable migrants; two years later, this number was 49 per cent higher (7,311 migrants assisted).

During the opening ceremony of the training, Diego Beltrand, the IOM Regional Director for South America, emphasized the role played by the DPU attorneys in migrant protection: “Access to an attorney is fundamental for migrants who need legal help but can’t afford to pay a lawyer, to ensure the protection of their rights and access to safe, orderly and regular migration paths.”

DPU’s Attorney General Carlos Paz said: “Migration flows are often connected with human rights violations that need to be addressed. The Federal Public Defender’s Office is the legitimate instrument to promote that protection.”

IOM Brazil Chief of Mission Stephane Rostiaux highlighted that the DPU is one of the most important public institutions promoting the rights of vulnerable migrants. “The new Brazilian migration law aligns Brazil with the best available international standards, but the law implementation remains a challenge,” he explained. “The DPU is a key player in turning the new law’s protective tools into real life changes for migrants.”

During the training, IOM presented a handbook that schematizes the 26 most recurrent cases of legal assistance provided by the DPU. The handbook outlines the procedures carried out by DPU’s biggest office specializing in migration, located in São Paulo, and provides a set of basic tools for public attorneys in other parts of Brazil.

With the trainings and the handbook, IOM hopes to support the process of expansion and improvement of the services that DPU provides to migrants nationwide, by helping attorneys learn the multiple legal tools available to assist migrants, update their knowledge on domestic and international law, and standardizing procedures for the benefit of the thousands of migrants assisted by DPU yearly.

The training is the first activity of the project Improving Legal Assistance to Migrants in Brazil and Promoting their Access to Labour Markets, funded by the IOM Development Fund (IDF). By the end of the year, IOM and DPU will have trained more than 200 government officials and civil society workers through face-to-face and online courses.